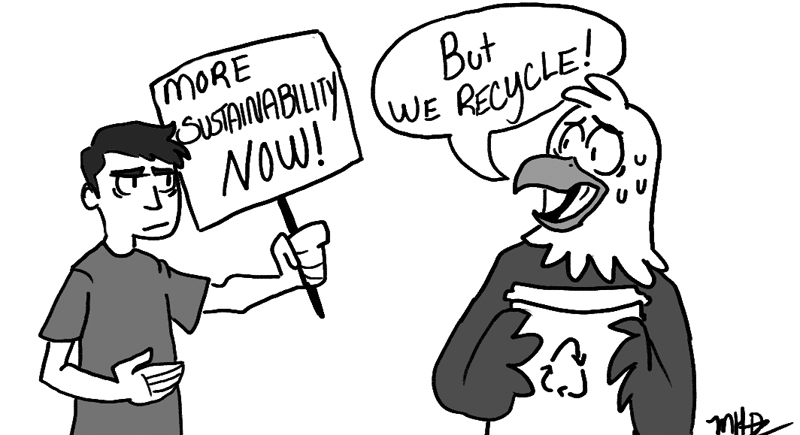 As an opinionated writer and aspiring journalist, looking back at my portfolio of Wheel articles these past two years, I’ve come to realize that perhaps I’ve been addressing too many of the obvious issues. From departmental cuts and elections to the economy and foreign policy, the stories on which I’ve editorialized have been rather consistent. Yes, there’s no doubt that my opinions definitely bleed red (think elephants), but for this piece I decided to find some green in my bloodstream.

Last week, I came across an article in The New York Times titled, “A Closer Look at Harvard’s Choice on Fossil Fuels.” The article, written by environmentalist Andrew Revkin, discusses a recent announcement by Harvard University President Drew Faust: “that university divestment from the fossil fuel industry is [not] warranted or wise.”

Although I like to hope I know a thing or two about climate change, this past week I’ve come to discover that there is a national campaign on a subject matter that I know absolutely nothing about. When I think of divestment, the first thing that comes to mind is BDS, that is boycott, divestment and sanctions, often associated with campaigns against Israel. However, when I googled the word, a plethora of articles came up.

Led by environmental activist Bill McKibben, 350.org is an international organization whose mission is to cut carbon dioxide emissions and build a global movement toward climate solutions. The “350” comes from a paper written by scientist James Hansen who asserted that 350 parts-per-million (ppm) is the safest, maximum amount of carbon dioxide in the atmosphere in order to avoid a “climate tipping point.” Have you ever seen the 2004 film “The Day After Tomorrow?” A tipping point isn’t exactly that, but it’s a level of carbon dioxide where global climate changes from one stable point to another with no turning back (example: the catastrophic melting of the ice caps).

So, what does 350.org have anything to do with divestment? The organization’s members have spread to college campuses to motivate students to promote awareness and petition their administrations to freeze and divest from direct ownership and commingled funds (public equities and corporate bonds) that finance and support the burning of fossil fuels. According to 350.org’s “Go Fossil Free” campaign, there are more than 200 publicly traded companies that hold the vast majority of the world’s coal, oil and gas reserves. The campaign’s tag line is: “if it is wrong to wreck the climate, then it is wrong to profit from that wreckage.”

Harvard is one of the nation’s largest platforms for student activism and holds the country’s highest endowment of approximately $31 billion. The administrators there have seen a push by its student body, asking the school to divest. In early October, the administration issued a letter maintaining their position that divestment is not a good idea. President Faust asserted that the University’s endowment supports school operations and scholarships and that an endowment shift “would appear to position the University as a political actor rather than an academic institution.” Although this response seems negative, the tree-loving people at “Go Fossil Free,” wrote, “this is the fight we’ve been waiting for … students are not backing down–they’re getting more fired up by the day.”

Harvard isn’t the only university where students are getting “fired up” about climate change. Emory University has gone to great lengths in the promotion of environmental awareness and positive activism. In 2010, Emory completed the Whitehead Biomedical Research Building, the first Leadership in Energy and Environmental Design (LEED)-certified building in the Southeast. Not only will the LEED buildings’ construction save the University water and energy costs, but they will also help Emory reach its energy conservation goals. Everywhere you walk there are recycle-friendly trash bins, signs of awareness, educational gardens, sustainability programs and much more. Among Emory’s “Points of Pride” on the University’s website homepage is “Advancing Sustainability.” Emory is on the forefront of environmental research, support and activism–there is no doubting that.

Additionally, Emory students are taking initiative and joining the “Go Fossil Free” campaign. Led by Taylor McNair (’16C) and Camilla Schramek (’16C), “Divest Emory,” a grass-roots student-run campaign, has a petition with over 400 student and faculty signatures requesting that the administration sit down and discuss the University’s investment portfolio. The group’s ultimate goal is for Emory to either actively announce that they do not invest in fossil fuels or that they are committed to freezing any current investment opportunities and divesting from all public equities and corporate bonds that fund the burning of fossil fuels within the next five years. GreenReportCard.org is a website that rates universities and institutions on their sustainability efforts and green initiatives. Emory received an overall “B,” with “A’s” in areas such as student involvement, transportation and buildings. However, the grade was negatively skewed by a “C” in “Endowment Transparency.” Emory students are asking for increased transparency and a look at exactly where funding is going.

Although this movement is fairly new, it has successfully spread across the country and “Go Fossil Free’s” members are now embarking on a European tour. Leaders of 19 cities in the United States including San Francisco, Seattle and Providence, as well as six universities, have officially committed to divestment.

Like I said, I usually bleed red, looking to question President Obama or over-analyze the state of the economy. Through simple research and exploration, I’ve been exposed to a subject matter that has honestly never really held a dear place in my heart.

“Divest Emory” will be meeting at Eagles Landing in the Dobbs University Center on Nov. 6, 2013. Although I’d often throw out those types of flyers or ignore the Facebook posts, I think I know exactly where I’ll be this Wednesday.