Disney’s Remake of Aladdin Appeals to a Modern Audience 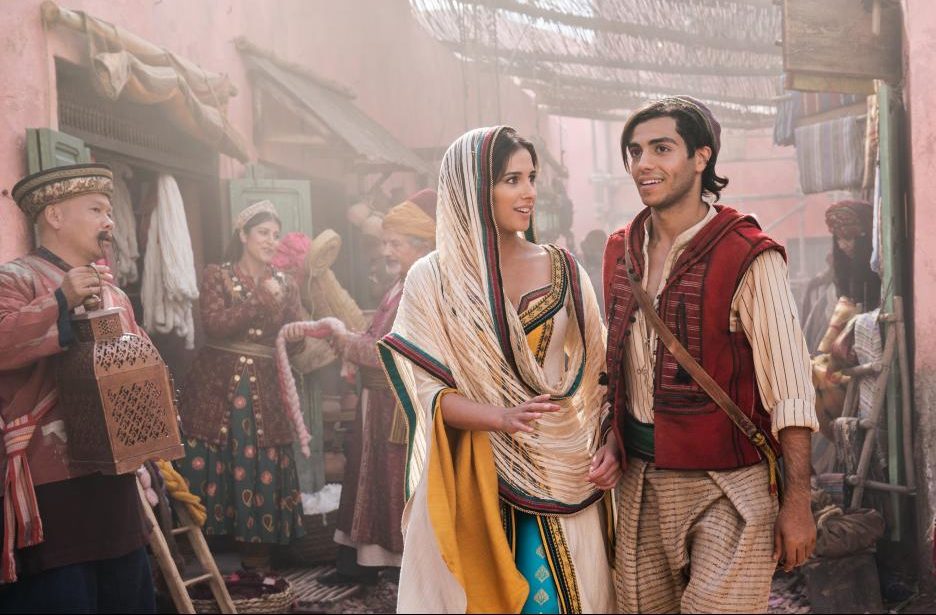 Live action remakes of Disney classics always have big shoes to fill, especially if the film in question is as controversial as Disney’s “Aladdin.” Known for its iconic performances, including the late Robin Williams as the voice of Genie, and catchy musical numbers, the original 1992 animation is an integral part of the Disney canon. The 2019 adaptation, directed by Guy Ritchie, knocked expectations out of the park with incredible set and costume design, paired with a cast that made the audience’s viewing experience nothing less than magical.

Early plans for the movie were met with criticism from groups attacking casting decisions. While the animated original is recognized as being culturally insensitive and, at times, xenophobic in its interpretations of eastern culture as mysterious or other-worldly, the updated live action film was made with intention of quelling these themes. The complexity of the characters, in particular, reflects how the one-dimensional mindset has evolved to one of acceptance and inclusion.

The characters themselves have been developed to better shape the modernity of the film. The remake builds on its timely themes, with modern musical motifs and Princess Jasmine (Naomi Scott) exhibiting a fierce independence unlike most Disney protagonists. Princess Jasmine’s struggle to attain her rightful place on the Agrabah throne parallels the modern struggles young women endure to gain coveted positions under the supervision of men. Despite societal challenges, Jasmine never fails to speak up when men unjustly attempt to belittle her, such as when her father, the Sultan of Agrabah (Navid Negahban), dismisses her ideas for the kingdom’s future. The film also delves deeper into the motives of its timeless villain. The evil Jafar (Marwan Kenzari) explains how he sees himself in our hero Aladdin (Mena Massoud), as both have struggled to survive as street rats. This time spent at the bottom of the social ladder is what propels Jafar to strive to become the most powerful man in the kingdom.

Even the animals breathe new life in the remake. Top-notch CGI allows Abu, Aladdin’s primate partner-in-crime, and Raja, Princess Jasmine’s patronus and pet tiger, to come alive while deviating from our expectations of animals that look like they were pulled straight out of nature. The most notable change, however, is the transformation of Genie’s persona. Will Smith makes the character his own, proving that it’s possible to revitalize old roles without sacrificing the integrity of the character. On top of brilliant comedic timing and jokes that appeal to young and old audiences alike, Smith’s expressive ability to convey different emotions brings out the humanity in his character.

The people of Agrabah fill the land with intense color, through both their decorational choices and their clothing. During songs like “One Jump Ahead,” the audience surveys the entire city with its breathtaking color and culture. Throughout the number, sweeping dresses in dazzling pinks, oranges, whites and yellows pop against the beige buildings of the city.

From the very first verse of its opening song “Arabian Nights,” the remake overflows with the wonder of an updated soundtrack. Smith’s brighter and more uplifting vocals give the beginning of the remake a more hopeful tone, as opposed to the dark and mysterious mood that marks the beginning of the original animation. Frequent dance breaks featuring beat-boxing and break dancing, as well as bass drops during more ceremonial moments, like Prince Ali’s extravagant arrival to Agrabah, all give the new soundtrack a modern flair.

Unlike previous Disney live action remakes, “Aladdin” brings consistent joy to the movie-going experience. Where “Maleficent” introduced a barrage of new characters, “Aladdin’s” new characters, such as Princess Jasmine’s new handmaid, Dalia (Nasim Pedrad), shine in their roles and supplement the renowned story. Where the “Beauty and the Beast” remake blundered with actor Dan Stevens’ CGI-aided rendition of the Beast, “Aladdin” effortlessly implements CGI in a way that makes characters like Smith’s Genie come alive.

However, in some cases, “Aladdin” falls just short of expectations. Similarly to the remake of “Beauty and the Beast,” it also stumbled with mismatched studio-recorded vocals dubbed over actors transformed by CGI, with some musical numbers leaving me in uncanny valley when the vocals didn’t exactly line up with the actors’ singing. Thankfully, this problem didn’t affect the slower, more meaningful moments, like Scott’s powerful ballad, “Speechless,” or Scott and Massoud’s classic duet, “A Whole New World.” The filming of some of the faster scenes also suffers from pacing issues. In “One Jump Ahead,” as Princess Jasmine and Aladdin maneuver through the city, the action is sped up like it might be in an old Charlie Chaplin film. Such techniques disrupt the remake’s tone.

Still, simply put, “Aladdin” was an enjoyable watch through and through. The film’s humor weaves comedic relief into tense moments, with Smith’s iconic brand of comedy enriching the characters around him like it had on “The Fresh Prince of Bel-Air.” A newly added party scene celebrating Prince Ali’s arrival lets each actor to shine individually — from Smith’s blunt sense of humor, to Aladdin’s physical comedy and occasional awkwardness as he struggles to woo Princess Jasmine. In the end, new performers revitalize the characters, making the movie everything that diehard Disney fans have wished for.

Disney’s remake of “Aladdin” brings the classic film to a new generation of fans, with its focus on character depth appealing to audiences looking for more than just a magic carpet ride. From the well-placed humor to the vibrant setting, “Aladdin” is a wish come true for adults and children alike, straight from Genie himself.