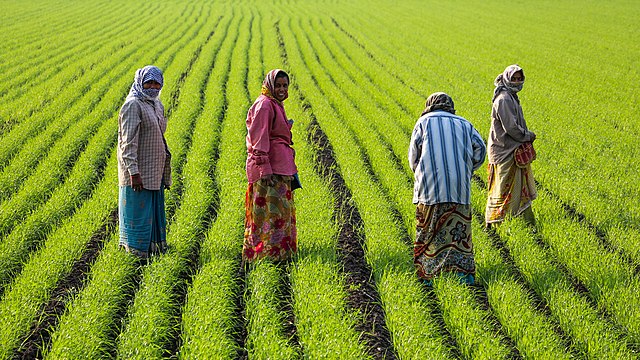 Food is often misrepresented as a one-sided story, a narrative focused on haute culture, Michelin starred restaurants and chefs and of course, the final presentation of the dish. But behind every Instagram-perfect rendition of food is a forgotten feminist revolution.

Contrary to what people might think, food doesn’t start in the kitchen. Food starts with production and farming, where women play a major role in developing agricultural techniques and passing down their knowledge. However, this narrative has been erased to allow men to dominate the culinary scene. Women deserve to be a part of the food dialogue and be at the forefront of the drive toward a more sustainable, organic and diverse food chain.

Despite their contributions to farming, women face gender barriers to owning land and accessing  water and energy, both of which affect food production. In many developing countries, only between 10 and 20% of landholders are women. Though women may be more competent in running a farm or making decisions, farming is considered the responsibility of a man. For example, in Kenya, women can only access land through their husbands or sons. As a result, women struggle to find their place on the land they take care of and social laws are created to prevent women from owning property rights.

Today, women are less likely to use sustainable agricultural practices to increase crop yields because they don’t have the funds to do so. But the U.S. Food and Agriculture Organization (FAO) estimates that food production by women can increase up to 30% and potentially solve malnutrition and hunger for 150 million people if women are able to gain access to the same resources.

The role of women in food production is also excluded in national gross domestic product (GDP) calculations because women rarely get paid. A universal standard for measuring economic growth, GDP fails to include unpaid household labor, which is stereotypically assigned to women. In developing nations, especially those in rural Africa, not accounting for the economic value of collecting resources like firewood, fetching water or cooking for their family erases women from the labor economy.

Females have historically developed biodiversity in agriculture, retaining valuable nutrients while processing food and requiring less resources to produce more food. But in the wake of the Industrial Revolution, the shift to capitalism has corporations fighting to buy up each stage of the production process and dominating the food chain. Instead of planting multiple types of crop on one farm, food production has transitioned away from female-run biodiversity to monocultures and mechanization. Rather than utilizing the hundreds of wild flora and fauna available to us, industrialization has created the false narrative that monocultures, which entail cultivating only one crop in a field, produce more food. However, this could not be further from the truth. Monocultures don’t produce more, they control excessive land, creating soil erosion and increasing the use of pesticides and fertilizers that damage the environment.

In trying to prioritize earning profits, corporation-driven agriculture breeds animals and grow crops for one purpose only, like breeding chickens for larger breast meat or cows for more milk. But selectively modifying genetics comes at a high cost against animal health, something we’ve grossly neglected in our fight for modernization. On the other hand, food processing techniques historically pioneered by women are more organic and nutritious. Hand pounding or milling rice with a mortar and pestle retains more protein, fat, fiber and other minerals in rice. The production-obsessed state of the U.S. is something I have always criticized, but its unwillingness to acknowledge women’s involvement in agriculture to expand their research and development breeds a disappointing air of patriarchal superiority.

Beyond corporate domination, the public also places heavy social expectations on women’s role in food. Cooking and other forms of domestic work are considered a woman’s job, and societal expectations define women’s attitudes toward food, determining how much and what they should be eating, how they should talk about food and how they should act in the kitchen. Especially in professional kitchens, haute cuisine is dominated by men who drive the dialogue of what is considered “good food.” Feminism is not just about dismantling the patriarchal systems and combating misogyny; it’s also about cementing women’s roles in shaping history. Food is the interaction between people, society and culture. It shouldn’t be gendered and corrupted.

Further, food advertising promotes the genderization of food, reinforcing the necessity of thin bodies and flat stomachs. Women should not be encouraged to have societally imposed relationships with food, but rather, to enjoy food without feeling policed. I don’t want to spend an entire meal at a top-rated restaurant obsessing over how many calories I’m consuming or how much working out I’ll have to do to make up for it; I want to sit in the moment, close my eyes and marvel at the symphony of flavors on my tongue.