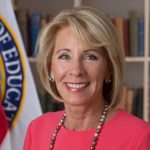 Secretary of Education Betsy DeVos announced that her department plans to rescind the “failed system” of Obama-era campus sexual assault guidelines to ensure fairness for both the survivors and the accused.

The Obama administration’s 2011 “Dear Colleague Letter,” which provided guidelines to universities about sexual assault cases, would be rescinded, DeVos told CBS News in an interview after she announced Thursday at George Mason University (Va.) that she planned to change campus sexual assault guidelines. Those guidelines include lowering the burden of proof to a preponderance of evidence, allowing accusers to appeal not-guilty findings and accelerating investigations.

“The era of ‘rule by letter’ is over,” DeVos said in her speech at George Mason. “Through intimidation and coercion, the failed system has clearly pushed schools to overreach.”

To generate new policies, the federal government will “draw on medical professionals, counselors, clergy and law enforcement for their expertise,” DeVos said.

Part of the Education Amendments of 1972, Title IX is designed to protect people from discrimination, exclusion or denial of benefits in any education program that receives federal funds on the basis of sex.

Although DeVos emphasized that sexual assault would not be tolerated, she said the low burden of proof required to find an accused person responsible and the lack of appeal rights for the accused and accusers make the Obama-era policies unfair.

DeVos cited past cases of individuals who have been wrongfully accused of assault, including student-athlete Matt Boermeester, who was expelled from the University of Southern California in July after school officials determined that he had physically abused his girlfriend. DeVos said that Boermeester was “playfully roughhousing” with his girlfriend, and that an onlooker had reported the incident to a Title IX administrator.

According to DeVos, “the young girl repeatedly assured campus officials she had not been abused nor had any misconduct occurred …  [but] university administrators told her they knew better.”

Emory Sexual Assault Peer Advocates (SAPA) wrote in a statement to the Wheel that “SAPA urges President Sterk and Emory’s Administration to uphold their promise to the 2011 Dear Colleague Letter and take sexual assault allegations seriously on our campus.”

The student organization added that lack of faculty and administrative support systems for survivors of sexual assault is a much larger issue than potential false accusations.

DeVos’ announcement was met with criticism, the majority of which came from the left and sexual assault survivors and advocates.

“This decision does a disservice to those who have worked hard to address sexual violence. Congress must now act to undo it,” Sanders wrote.