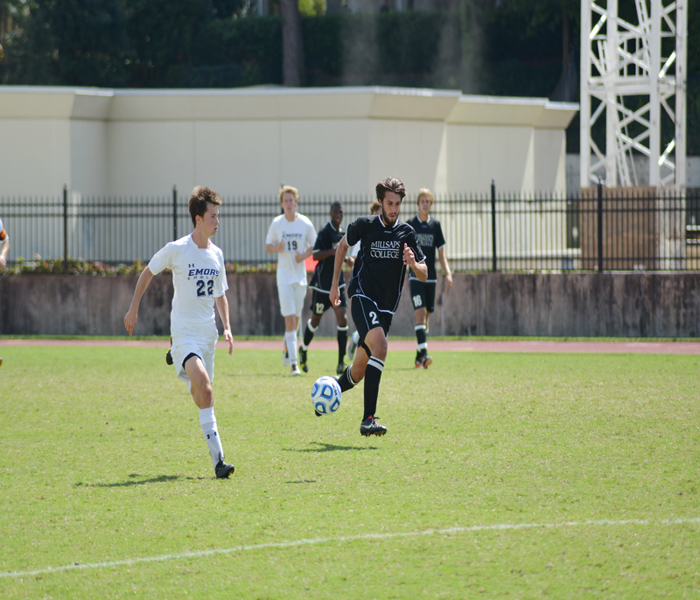 On the last day of Swoop’s Week, the men’s soccer team beat Millsaps College (Miss.) 1-0 in a homecoming game that was scoreless into the last 10 minutes.

Freshman forward Jason Andrejchak scored the winning goal on a cross from junior Dylan Price. It was Andrejchak’s third goal and ninth point of the season.

The Emory defense allowed 14 shots from Millsaps, only two of which were on goal. Sophomore goalkeeper Abe Hannigan turned in a strong performance en route to his third shutout of the season.

Post-game emotions among the players varied. “I think we played well,” Millsaps midfielder Lukas Elmhammar said.  “We could have put in a few and so could they. We made a mistake, and they scored.”

Emory defender and midfielder Carl Credle was not completely satisfied with the win. “We played like absolute crap today,” Credle said. “We’ve got to come back really hard next game.”

Still, the game didn’t fully rally the crowd at any point. The stands were loudest when the swim team ran out of the Woodruff P.E. Center wet and in swimsuits, cheering and banging their kickboards on the railing.

“It was kind of a gritty game,” Emory midfielder Michael Rheaume said. “Neither team, for whatever reason, was able to get any sort of rhythm going.”

Rheaume stressed that in low-scoring games, both teams are under more pressure to take possession of the ball and attack the goal so they have as many chances as possible to score. When neither team is playing particularly well, the team that works harder usually gets the win.

After a strong start to the season followed by tough loses to Oglethorpe University, Centre College (Ky.) and Berry College, this game may have been what the Emory team needed.

“This last win meant a lot to the season because it was really one of the first games that we won simply because we put that extra little bit of effort into the game instead of being more talented or just playing better than our opponent,” Rheaume said. “Games like that can sometimes build more confidence than a game where the team is playing really well and you win by three goals.”

Emory Head Coach Sonny Travis was impressed by the play from both teams.

“Our scouts said this is one of the better Millsaps teams in a long time,” he said. “They have three foreign players who are all very dangerous. They came in and gave us a good battle.”

“It was a good game between two good teams,” Voltz said.

Despite ranging emotions, this win brought the team’s record to a strong 7-3, and that win was made bigger by its placement in Swoop’s Week.

“You always want to win your homecoming game,” Travis said. “We got a gut check and rose to the occasion.”