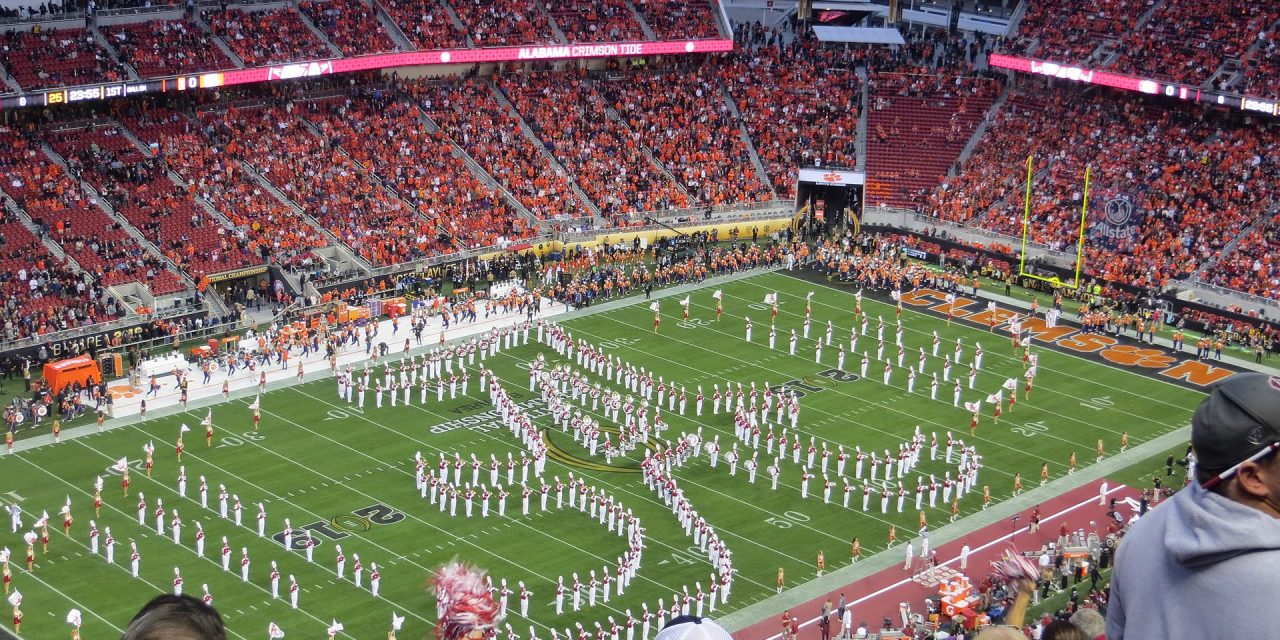 Even as the fall semester comes to an end, college football players are still going strong. The college football regular season is winding down, and even though COVID-19 has caused problems for college football in 2020, conference champions and other high-level teams are being selected to play in various bowl games nationwide.

Choosing the four best teams in college football to play in the College Football Playoff is a huge debate in a normal year. In 2020, the committee choosing teams has an even greater challenge given all the circumstances that have affected each team this season.

In 2014, the college football postseason format was permanently changed from the two-team BCS National Championship Game to a four-team playoff bracket. In the six years the new College Football Playoff structure has been in place, only teams from the Power Five conferences — the ACC, Big Ten, Big 12, Pac-12 and SEC — have made the playoffs.

This new system has so far excluded conferences with schools that are not as big and do not get as much media attention. For instance, conferences like the Mountain West, Mid-American Conference and American Athletic Conference are often missing from conversations about the top teams in college football. If there was any year to give these schools spots in the playoff, it would be 2020.

The two teams from non-Power Five conferences that should be seriously considered for spots are the University of Cincinnati (Ohio) Bearcats and Coastal Carolina University (S.C.) Chanticleers. Both teams are undefeated in their respective conferences, with the Bearcats sitting at 8-0 in the American Athletic Conference and the Chanticleers at 11-0 in the Sun Belt Conference. Each team plays in their conference championship game on Dec. 19 against ranked teams, and wins would help boost their respective resumes for the playoff.

Cincinnati beat the previously No. 24-ranked Army West Point (N.Y.) Black Knights before demolishing the originally No. 16-ranked Southern Methodist University (Texas) Mustangs 42-13. The Bearcats will face off against the No. 23 University of Tulsa (Okla.) Golden Hurricane in the conference championship. Assuming they win, they will finish undefeated with nine wins.

Coastal Carolina has also not lost a game this season. They began their 2020 campaign with a 38-23 win over the University of Kansas Jayhawks, a Big 12 team, on the road on Sept. 12. They then beat the No. 19 University of Louisiana at Lafayette Ragin’ Cajuns on the road a few weeks later.

Their most notable win came just under two weeks ago at home against the No. 13 Brigham Young University (BYU) (Utah) Cougars. On the final play of the game, the Chanticleers stopped the Cougars at the 1-yard line to lock up an impressive win. At the time, BYU was also undefeated, and the two teams scheduled the game only three days in advance. Coastal Carolina had their conference game canceled that week due to a COVID-19 outbreak in their opponents’ program, and BYU did not have a scheduled game that week. The schools’ athletic directors arranged the game last minute to give both teams a chance to add an impressive win to their profiles.

The Chanticleers were originally supposed to host the No. 25 Liberty University (Va.) Flames with ESPN’s “College Gameday,” a popular Saturday morning television show, broadcasting from the university. “College Gameday” chose to stay at Coastal Carolina for their game against BYU and gave college football fans an in-depth look at why teams from lesser-known conferences deserve consideration for the playoff.

When adding teams like Cincinnati or Coastal Carolina to the four-team College Football Playoff, it is done at the expense of Power Five schools. This year, schools with the biggest risk of supplantation by a non-Power Five school are the Ohio State University Buckeyes and the University of South California (USC) Trojans.

Like Cincinnati and Coastal Carolina, Ohio State is undefeated. The Buckeyes, holding a 5-0 record, go into the Big Ten championship game on Dec. 19 against the No. 14 Northwestern University (Ill.) Wildcats. Although they have yet to lose and have Justin Fields, one of the best quarterbacks in the nation, they only have one notable win: a 42-35 victory at home against the No. 9 Indiana University Hoosiers. Assuming they are victorious in the Big Ten championship game, why should Ohio State, a team with six wins, deserve a spot in the College Football Playoff over other undefeated teams with double the number of wins?

The Buckeyes weren’t supposed to make the Big Ten championship game. The Big Ten’s rules state that teams must play in at least six games to make the conference championship game. The conference did not start its season until mid-October due to COVID-19-related player safety concerns, and the Buckeyes have only played five games so far because three of their games were canceled due to outbreaks. On Dec. 9, the conference amended its rules to allow Ohio State to play in the game.

USC is also undefeated and in first place in the Pac-12. The Trojans, like the Buckeyes, are a potential six-win team. Unlike the Buckeyes, though, USC does not have a win against a ranked team; they barely escaped the unranked University of California, Los Angeles Bruins 43-38 last weekend. USC plays the unranked University of Oregon Ducks in the Pac-12 championship game this weekend, but the Ducks are only competing because the University of Washington Huskies had to pull out due to COVID-19 problems in the program.

Power Five conference fans can argue that their teams’ strength of schedules is greater than Cincinnati’s and Coastal Carolina’s. However, finishing undefeated after completing a full regular season is a very impressive feat no matter who their opponents are.

At the very least, both Cincinnati and Coastal Carolina should be in one of the College Football Playoff, New Year’s Six games. But these teams have proven they can hang with the top teams in the country and deserve a chance at the College Football Playoff National Championship Trophy. It’s high time the selection committee gives the lesser-known teams the recognition they deserve. 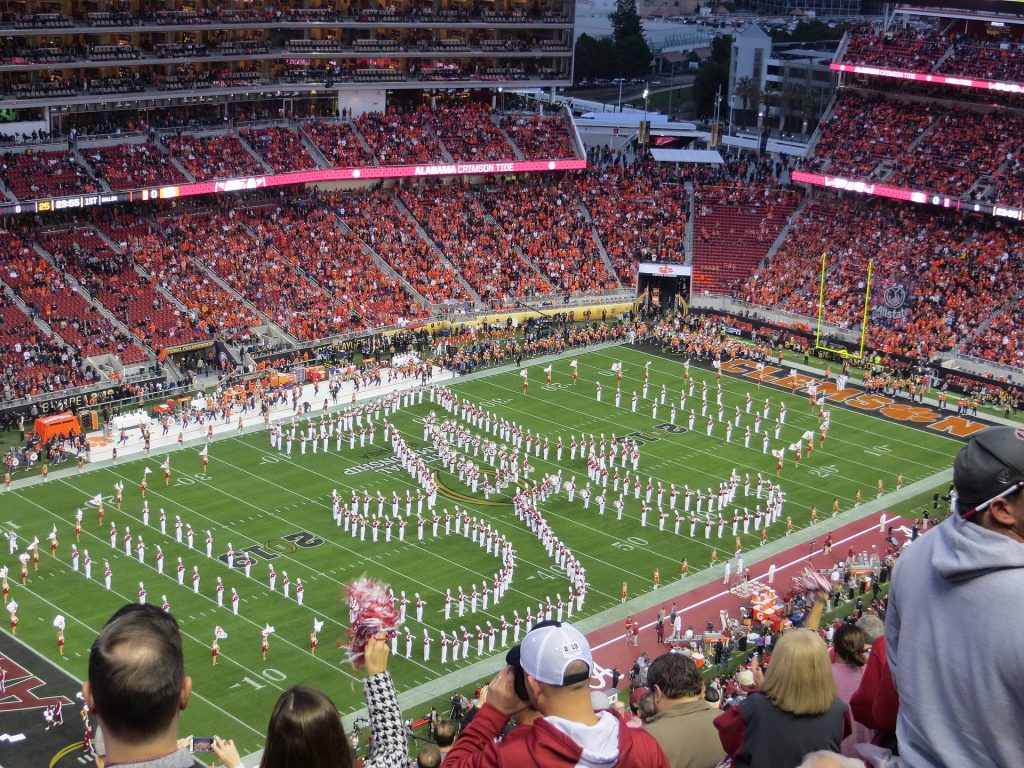 The University of Alabama marching band creates their logo on the field before the 2019 College Football Playoff National Championship. This year, some non-Power Five schools have joined the Playoff conversation. (Courtesy of Wikimedia Commons, Legoktm)