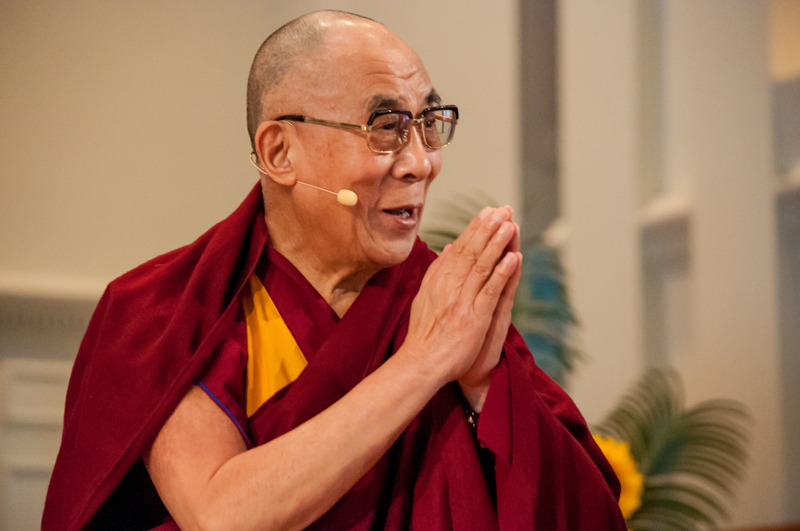 His Holiness the XIV Dalai Lama explored the fundamental ethical values that are a part of every major religion during the third in a series of lectures in front of a packed audience in Glenn Memorial Auditorium on Wednesday.

Following the lecture, University President James W. Wagner, Emory Provost and Executive Vice President for Academic Affairs Claire Sterk and Student Government Association President and College senior Raj Patel joined the Dalai Lama on stage for a question-and answer-session. The topics ranged from the rehabilitation of prisoners to the ethics of firing employees.

After a welcome on behalf of the faculty from Sterk, an opening on behalf of students from Patel and an introduction by Wagner, the Dalai Lama began his 20-minute lecture titled “Secular Ethics 101.”

“Brothers and sisters, of course I feel great honor to come to this famous university,” the Dalai Lama said in opening his speech.

He jokingly prefaced the lecture by explaining he had never actually done homework.

“If you expect some marvelous teaching or something … then nothing,” he quipped.

During his lecture, the Dalai Lama said humanity is currently facing “some sort of moral crisis.” He said all human activities come with sincere motivation, including the activity of teaching religion.

The moral crisis is clear, he added, given that religious institutions that normally promote morals have become a means of corruption in many cases, the Dalai Lama said.

“Why do these things happen?” he asked. “I think the society; I think basically, lack of conviction. Moral principles are [the] ultimate source of inner strength.”

During the question-and-answer session, Wagner brought up the topic of institutions and organizations that are forced to cut back and institute employee layoffs.

“There are groups of people who are told they no longer have a job … It does not feel good for anyone I can assure you,” Wagner said. “Is it not possible to show compassion?”

After a clarification from the Dalai Lama’s translator, Wagner rephrased the question, asking how an organization can rationalize trying to exercise an ethic of compassion when it finds itself forced to have employees make a sacrifice.

“As a capitalist country, only because of profit, then I don’t know,” the Dalai Lama responded. “That’s why when it comes to socioeconomics, I am Marxist, I am not capitalist … The main concept there is equal distribution. There are more ethics there. Whereas capitalists only think for profit, profit. But again, no matter what the system, the individual really should take care of their workers, their employees.”

Dalai Lama also focused his speech on education systems in many countries, which he said are very much oriented toward “material matters,” in that they focus on preparing students for careers to make money rather than ethics, for example.

The Dalai Lama pointed to India’s education system as an example of a more “complete form” of education because it allows education and spirituality to go hand in hand.

The difficulty arises, he said, when individuals attempt to teach moral principles that come from a specific religion. Thus, he said, teaching secular ethics in schools and universities would be “the appropriate method for today.”

“The education institution has, I think, a very important role to experiment, to [conduct] more research work,” he said. “Then we can introduce [a more complete form of education] … therefore, I hope [Emory] can play an important role like that.”

Following the lecture, a group of select students were allowed to ask questions of the Dalai Lama, who was joined by a panel of Wagner, Sterk and Patel for the second part of the event.

Wagner, who kicked off that part of the event, asked the Dalai Lama for his thoughts on the common teachings of the world’s religions.

“I believe secular ethics is the basis of all religions,” the Dalai Lama said. “So once you have full conviction about these secular ethics, then … religion itself becomes truly genuine, positive [and] spiritual.”

During the session, Wagner tossed a question to Patel, asking how prepared Patel and his fellow students at Emory would be to embrace or question what the Dalai Lama suggested to be a more “complete education.”

“One of the things that Emory does is it helps [students] criticize not only what [was] thought but how we think of ourselves and what we think of the world,” Patel answered.

“Thank you your Holiness,” Parent said amid laughter from the crowd.

Although many students enjoyed the Dalai Lama’s lecture, some pointed out that at times it was hard to understand what he was saying.

“I really enjoyed the lecture,” College sophomore Eli Goodman said. “It had me thinking about concepts and ideas I haven’t really considered. Although at some points, it was difficult to understand [the Dalai Lama] which is understandable given the language barrier, but I wish I could have better comprehended his lecture.”

Some students also said they felt that the Dalai Lama was down-to-earth during the lecture.

“What stood out to me was how he presented himself,” College sophomore Katie Boice said. “He’s a world renowned man. Yet, he’s so humble and genuine. I thought the way he put everyone at ease was very impressive.”