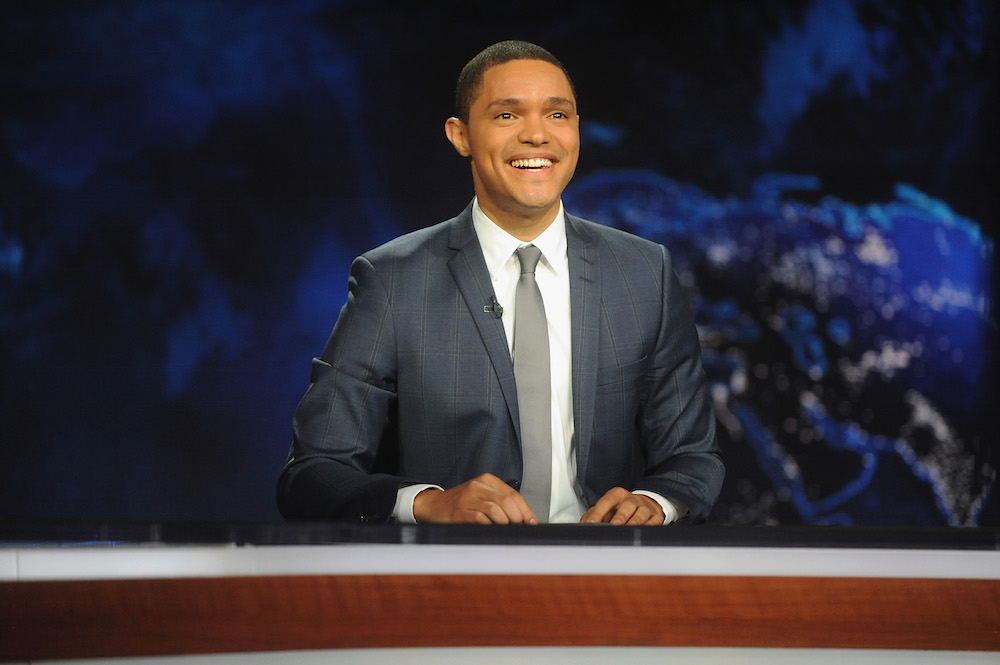 The trouble with reviewing the first weeks of The Daily Show with Trevor Noah is twofold.

First, it’s that the first bits of any show like this, especially one with an inexperienced anchor, is going to be a lot of beginning to understand the voice and ideas that will ultimately inform it. You can look at the first week of any great Daily host (David Letterman, Johnny Carson or Craig Ferguson) and see that a number of elements are later cast aside, or that things we love just  haven’t shown up yet. The first weeks can give you an idea of what the show is going to be like, but judging the show in the long term becomes difficult. My evaluation now may not necessarily hold up in a few years.

The second, and perhaps the more immediate concern, is the person he’s replacing.

The elephant in the room — no matter who ended up ultimately getting this job — was that he’s replacing Jon Stewart, who is unquestionably one of the most loved newsmen and comedians of the 21st century. Stewart took a good, not-great talk show on Comedy Central and turned it into one of the strongest comedic and political voices, as well as one of the greatest career launching pads, since Saturday Night Live. He became the face of integrity and the face of righteous indignation.

As new Daily Show host Trevor Noah said: “[He was] in many ways, our political dad. And it’s weird because Dad left.”

But Noah’s next sentence reveals what he is capable of bringing to this role: “And there’s a new stepdad. And he’s black.”

Undoubtedly, Noah brings a new set of perspectives to The Daily Show, ones sorely missed in the largely homogenous world of late night. He’s not only black, he’s an immigrant from South Africa, a comedic voice come to America to provide a perspective from the outside looking in. In a way, he’s invoking or calling on what has made John Oliver such a popular voice over at Last Week Tonight. And in another way, he’s echoing Larry Wilmore at The Nightly Show, providing a black perspective on current events, though hopefully with more success than Wilmore has managed thus far.

Unfortunately, his performance has not caught up with the fact that his perspective is different.

Intentionally or not, Noah began his time on The Daily Show doing his best Jon Stewart impression.

In fact, it’s shocking how little has changed so far from Stewart’s run. Likely due to a largely unchanged writer’s room (with the exception of the loss of head writer Elliott Kalan), the jokes sound the same; they simply have a different accent delivering them. The structure of the show remains unchanged. The segment titles are still pun-based. The correspondent sections remain the same (though conspicuously missing the popular Jessica Williams) with Noah playing the straight-man boss to the wacky and often irresponsible correspondents gathering the news.

Noah comes from a different world than Stewart, and I can’t wait for the day when he gets to show off who he is as a comedic performer. But it’s fully understandable. Noah has a huge set of shoes to fill, and to begin to try to walk in them is to assist an intensely loyal audience while they get comfortable with their new host.

The only real difference so far is Noah’s infectious enthusiasm. Stewart became incredibly weary (understandably so) towards the end of his run, when the weight of the world and the fight that he brought on himself became too much for him to bear.

Noah is still fresh-faced and eager to take on the so-called “War on Bullshit” that became Stewart’s trademark. Where Stewart seemed exasperated, Noah gleefully takes on all comers. He’s a Muppet of a news correspondent, a dimple-faced mischievous smile ready to meet every subject of ridicule.

Perhaps no segment was able to meet this better than the highlight of his first week: his segment on Donald Trump. To call any comedy segment on Trump low-hanging fruit is to understate. Trump is a comedic produce section; grown, picked, and laid out with a label for you to pick up at your leisure at a low, low price.

But what Noah does is what he’ll need to do to survive. With a gleeful amount of attitude, he combines his personal homegrown perspective with the events of the day. It’s a point that seems so obvious in retrospect, but I’ll be damned if it doesn’t seem brilliant as he’s saying it. It’s smart, it’s funny, and if he can do a few segments like that a week, Noah will be an important voice in no time.

I’ve talked mostly about Noah as a comedy personality and a host, and I’m ignoring his interviewing segments. After all, Stewart was a fiery interviewer at his best, unafraid to take on — and take down — the big targets. And let’s be honest, Noah isn’t quite that yet. He’s inexperienced with interviews. Personal for sure, but not yet insightful. But in the end, that doesn’t matter. He’s got the ability, it just needs time to grow.

And I think that’s the ultimate statement to make about the first week of The Daily Show with Trevor Noah. He’s got the biggest shoes to step into, and he doesn’t yet have the reputation to step into them without trepidation. But Noah is a strong comic personality, and his eagerness and optimism will take him far. Work is to be done in developing a personality of his own, and even more needs to be done with his interviewing. But I see no reason to doubt that Trevor Noah will get there.

Grade: None. After all, wouldn’t you hate being graded on the first slide of your presentation?