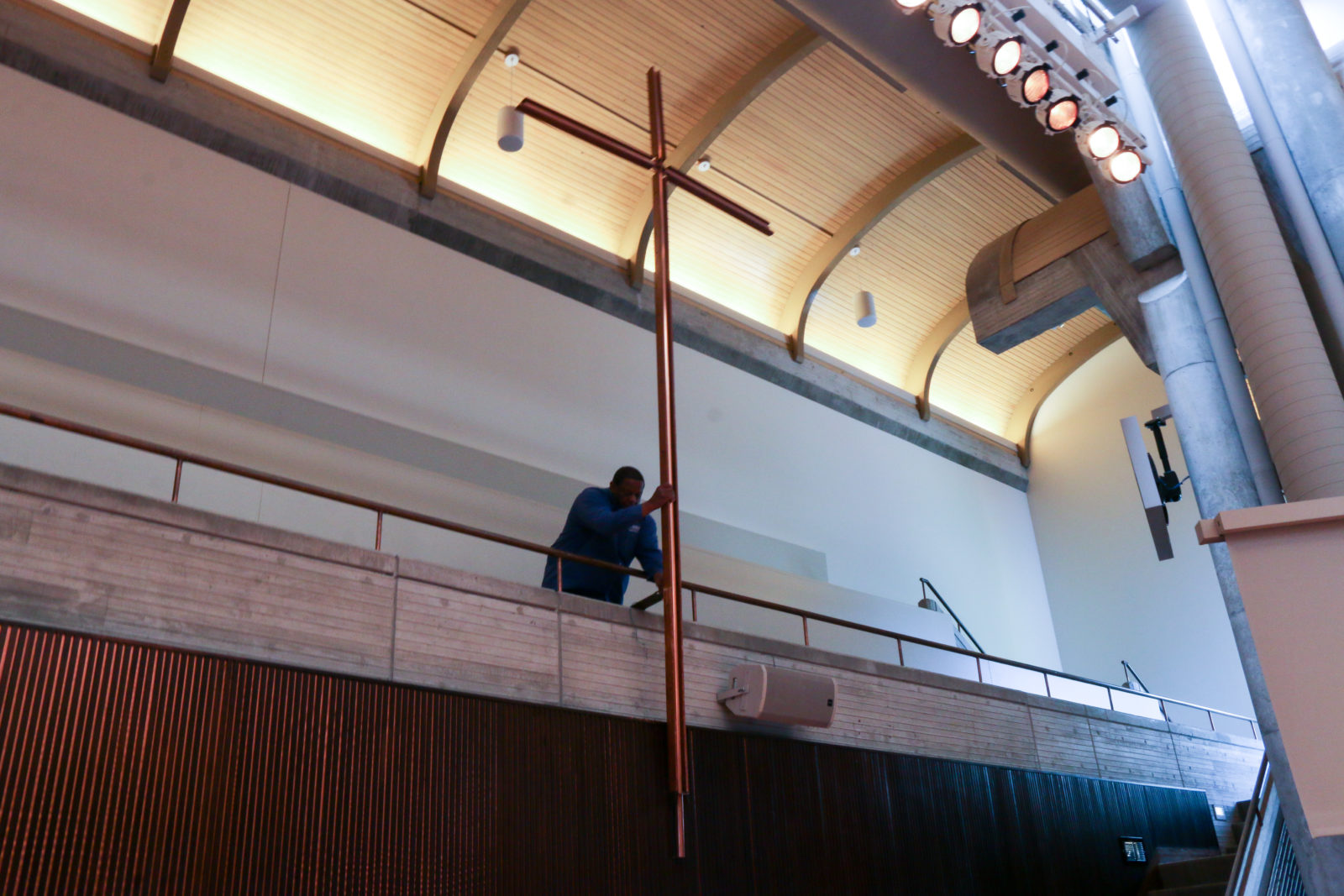 The Cannon Chapel will soon have to find a new keeper of the cross.

When custodian Gerald Alford isn’t around, moving the Cannon Chapel’s 10-foot-tall cross takes two people or more. The staff almost exclusively reserves the task for Alford, who can do it on his own.

However, Alford won’t be the man on the job for much longer. He retires in January 2020 to become the full-time coach of an Athletic Amateur Union (AAU) basketball team, a position he currently only holds part-time. Outside of Cannon Chapel, Alford is the head coach for Georgia Ballers, an AAU basketball club that has placed over 300 student athletes in various colleges, including the University of Georgia and the Georgia Institute of Technology. I met Alford at the Chapel at 9:30 a.m. Feb. 8 to get a sense of his unique daily routine.

Prior to Emory, Alford attended University of Wisconsin-Milwaukee and ran his own private janitorial company. For the past eight years, Alford has served as the designated custodian for Cannon Chapel, and is often the only custodian serving the building.  In addition to regularly moving the cross and cleaning the building, Alford also moves the 9-foot-tall, 80-pound menorah on the Jewish High Holy Days of Rosh Hashanah and Yom Kippur. He ensures that any event in the chapel is ready to go, and it’s his quest to make sure the task is done right.

Moving the cross is a tall order for two custodians, let alone one. But every Monday morning and Thursday night, Alford does it alone. The bronze cross stands about 10 feet tall and 3 feet wide, and Alford claims it weighs “easily 60 to 70 pounds.” I tried to lift it but struggled and failed, unable to balance it.

“It’s real top heavy,” said Alford of the cross. “You got to make sure it’s balanced.”

On Thursday evenings, the cross has to be taken down and stored, and on Monday mornings, the cross is put up in the center of the sanctuary. While Alford brushes off the difficulty of putting up the cross, it requires a keen sense of coordination in addition to pure strength. I noticed two hooks in the balcony of the sanctuary to hang the cross: if Alford misses either one, the cross could drop 20 feet and break.

“It would be a pretty easy way to lose your job,” said Alford, thinking of the possibility.

I stumbled upon Alford and another custodian, Sherell Copelin, on a Friday morning, slouched on chairs during a break in the sanctuary area of the Cannon Chapel. Alford stood up, and I could see how he could do what other custodians could not: he is a little over six feet tall , and muscular.

He showed me his Friday morning routine to set up for the Muslim Jummah prayer service: removing all chairs from the sanctuary and moving handcrafted screen dividers to separate the sexes. He showed me the ablution rooms used for members of the Muslim community, recalling scenes of Muslim students preparing for prayer, standing on top of sinks and washing their feet. A 2013 renovation of the building added the ablution rooms to help Muslim worshippers wash for prayer. For Alford, the renovation eased cleaning the bathrooms, as worshippers no longer stood on the sinks to wash their feet.

For Coordinator of Site Operations at Cannon Chapel Sara McKlin, Alford is the go-to person whenever the sanctuary has an event requiring a special setup. Because of him, she encounters no conflict in setting up events for different faith groups.

“He really takes ownership of the building and the routines,” McKlin said. “He just does things really seamlessly without having to be reminded … and takes pride in having things right.”

I ran into Alford again later that afternoon when he was single-handedly moving, carrying and cleaning the folding tables prepared for a 100-person event. He politely brushed away a student who asked if he needed help.

“He’s always right there when you ask him to provide something, and he does good work,” Candler School of Theology Multimedia Specialist Stanley Taylor said. “He has a great attitude, and it’s always good to see him come in.”

Alford promptly arrives to work at 6 a.m. and leaves around 3 p.m. each day. Moving the heavy cross and menorah are as routine as his 37-minute commute. Alford says he vastly prefers his work at the chapel to his previous custodial positions at fraternity houses and residential dorms. He begrudgingly recalled cleaning two inches of Jello coating off the floor while the strong stench of vodka hung in the air of a fraternity house.

During his time at the chapel, Alford has amassed many fond memories, such as the time when he moved the menorah down for an event in 2018 and saw it completely covered in mold. He cleaned it without being asked, performing an extra favor for the chapel and even endangering himself to mold exposure.

“It wasn’t my job, but I spent two hours cleaning that thing,” Alford said. “It’s because I love working here.”

In July, the Cannon Chapel  has trouble: Alford goes on vacation. In the summer, he travels with his athletes, hellbent on helping them acquire scholarships. For him, it’s a way of giving back to the community. But come next January, the Cannon Chapel will have to find a replacement for all the work Alford does although it is likely more than one replacement will be needed to take on the task.

“Gerald is one of the key people who brings life to the multi-sanctuary use in Cannon Chapel,”
founder of Emory’s Muslim Student Association Isam Vaid (93O, 95C, 99PH) said. “His smile captures the care, consideration and dedication that resonate with all who encounter him.”