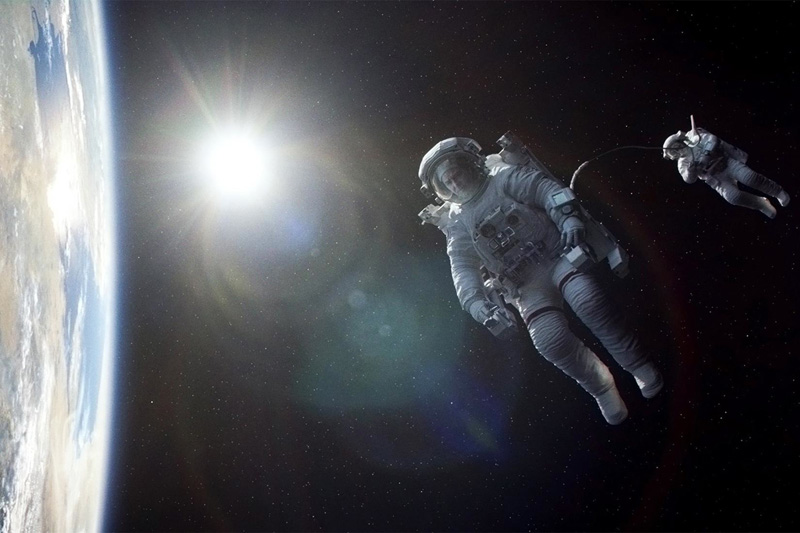 In his first feature film in seven years, writer-director Alfonso CuarÃ³n (“Harry Potter and the Prisoner of Azkaban”) creates a lost-in-space survival story that is exciting and tense, yet deeply personal.

“Gravity” tells the story of Dr. Ryan Stone (Sandra Bullock, “The Blind Side”), an engineer on a space shuttle expedition for her first time with experienced astronaut Matt Kowalski (George Clooney, “Up in the Air”). When debris from a Russian satellite hits the shuttle and breaks off communication with NASA, the two become the sole survivors of the crash and must travel to the International Space Station before their oxygen supply runs out.

While the plot would otherwise seem to imitate countless sci-fi survival horror films that came before it, its masterful pacing and breathtaking cinematography make “Gravity” surprisingly original.

CuarÃ³n’s signature long takes, in which the camera lingers on the characters for extended periods of time (including one which lasts over 15 minutes), distinguish “Gravity” from a generic fast-paced thriller.

The hovering, slow-moving camera makes the viewer feel like drifting through space alongside the protagonists.

At the beginning of the film, the panoramic view creates an aura of uneasy calm. The camera’s graceful movement makes the viewer’s anticipation of the impending catastrophe all the more excruciating.

The 3D visual effects further immerse viewers into this hostile yet intriguing world. By avoiding overpowering, in-your-face shots, the filmmakers make 3D such a natural component of the film that the viewer easily forgets he or she is even wearing glasses. “Gravity” is, in fact, one of those rare films that must be seen in 3D, since the special effects make some of the striking, artistic shots even more impressive. The layer of devastating wreckage, superimposed against the iconic backdrop of Earth, imparts an unparalleled sense of terror and wonder that could not otherwise be accomplished without the spatial perception achieved by 3D technology.

“Gravity” is, above all, stylistically daring. From the effortless shift between third- and first-person perspectives to the dizzying twirl of the camera during a moment of helplessness, the cinematography boldly enables viewers to experience the full range of the heroine’s complex emotions.

Overall, the hauntingly beautiful visuals, coupled with a gripping, eerie score, make for an effective, taut thriller that will surely keep viewers at the edge of their seats for an intense hour and a half. A scene depicting the jaw-dropping disintegration of a space shuttle in slow motion lacks the expected heart-pounding soundtrack and is instead only accompanied by barely audible sound effects, making the spectacle all the more enthralling and terrifying.

What makes the film especially unique, however, is that it does not prioritize style over substance. It manages to tell a profound and heartfelt story about Stone’s psychologically complex character, thanks to CuarÃ³n’s intelligent writing and Bullock’s phenomenal acting.

Bullock and Clooney display great chemistry on screen, particularly in the way that Bullock’s character’s anxiety and desperation complement Clooney’s cool demeanor and much-appreciated deadpan humor. While Stone is explored as the plot progresses, Kowalski remains more of a figure than a person, providing a reassuring voice of reason.

Bullock delivers a powerful, accolade-worthy performance. She seamlessly transitions between emotions, from astonishment and fear to the horrifying recognition of her own mortality.

Though she is mostly entrenched in perilous situations, there are several calmer moments in the film that give her an opportunity to reflect on her life. Her internal monologues and conversations with Kowalski give the viewer a brief glimpse of her past, which provides more depth to her character.

As a lone astronaut floating through space, Stone is both literally and figuratively rootless. She does not appear to have any family and painfully admits to Kowalski that she lost her only daughter in an “unnecessary” accident. Stone’s confident persona gradually unravels, and we instead see a woman who is dispirited, alone and therefore more human. As Stone’s principles and will to survive are challenged, she acknowledges that space signifies a form of escape from her earthly woes.

“You have to let go,” Kowalski tells her, suggesting that she must come to terms with her troubled past. Stone feels resigned at her inability to save her daughter’s life due to circumstances beyond her control, a situation that seems to parallel her own predicament in space. However, she must choose if she should try to save herself against overwhelming odds, even if it means entering an uncertain future. Thus, Stone’s internal crisis addresses the question of predestination versus free will. It is the final scene evoking baptismal imagery that tackles this question and fully establishes “Gravity” as an incredible testament to the resilience of the human spirit.

In short, audacious cinematography and talented performances make “Gravity” more than just a space odyssey but rather a journey of self-discovery that is resonant, inspiring and deeply moving.