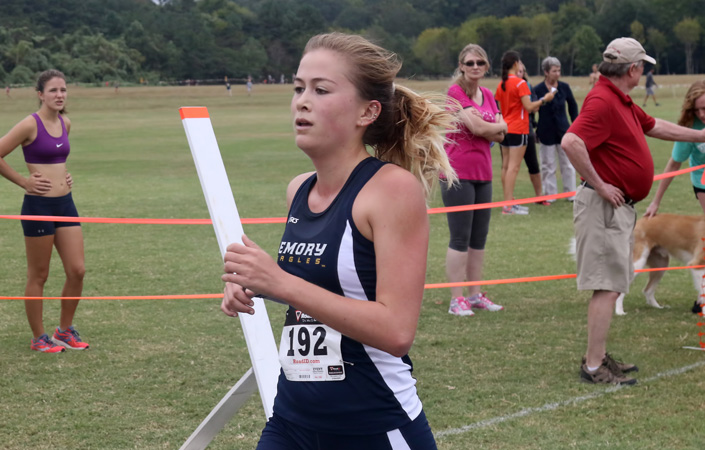 The Emory cross country program returned to racing Saturday, Oct. 15, in two meets: The women and men took eighth and seventh, respectively, in the Rowan Inter-Regional Border Battle in Glassboro, N.J., but fared slightly better at the Berry Invitational in Mount Berry, Ga, with the women and men placing fourth and third, respectively.

Winning it all was a tall order for the Eagles, but there was no shortage of recognizable success.

“Our women ran better than they ever have at this point in the season,” Head Coach John Curtin said. “And we beat a lot of teams ranked ahead of us.”

All 10 runners he selected to attend this meet ran new personal records in the 6K — and nine  finished under 23 minutes. Leading the group was junior Gabrielle Stravach, clocking in at 21:33, gaining a 22nd finish out of 386 runners. Senior Mia Eisenhandler was the next Eagle to finish, placing 64th overall with a time of 22:16. Slightly later were junior Tru Powell (22:23) and sophomore Maeve Andrews (22:24), taking 74th and 75th, respectively.

Senior Michael Sisario led the way for Emory with a 32nd overall finish among 382 individual runners, clocking in at 24:22,his new personal record in the 8K. Fellow senior Lukas Mees also ran a new personal best at a time of 24:25, attaining the 37th spots. Freshman Luis Torres was the next Eagle on the board with a time of 24:37 for the 51st overall spot, maintaining his brilliant rookie year.

“It was my first time finishing No. 1 in the group, which was awesome,” Sisario said about his effort.

Sisario attributes his personal success to his coaches and teammates.

“My coach does a really good job, helps us prepare and develop racing plans and racing strategies that work well for each of us,” Sisario said. “For me, it’s about making sure I’m starting slow and then speeding up as it goes on, but that can be different for other people.”

Sisario also mentioned racing with his teammates improves his own performance.

“It’s the 5K to 7K part when your legs are tired and hurting, but it helps that I can communicate and race with my teammates like Lukas [Mees] and Luis [Torres],” Sisario said.

At the Berry Invitational, the Emory men’s group delivered a 145-point performance to take away third place out of 19 teams in the 8K. Sewanee: the University of the South (Tenn.) won it all with 145 points, followed by runner-up and meet host Berry College (Ga.) with 84 points.

The women’s side also showed promising achievements, with a fourth-place performance of 146 points out of 19 teams in the 6K. Berry (77 points) was the runner-up here as well, behind Florida A&M University (23 points) in first place.

“Berry was a chance for the kids who weren’t in the top 10 to race one more time,” Curtin said. “And we had several personal bests.”

Meanwhile, the goal for the Rowan Inter-Regional Border Battle, according to Curtin, was to “gain a quality event before we start our championship season.”

“Glassboro was one of the biggest and best in the country, with 400 athletes in each of the races and 14 nationally ranked teams,” Curtin added.