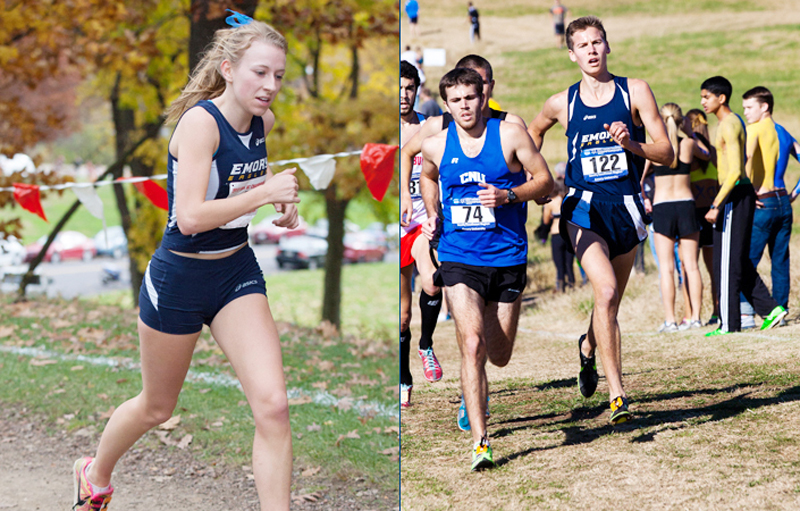 The men and women’s cross country teams excelled with second place finishes on Saturday at the NCAA South/Southeast Region Championships, automatically earning bids to this season’s nationals. The  NCAA Division III Championships will be held in Hanover, Ind.

The men’s team competed in a 24-team field, recorded 91 points, and only fell short behind Bridgewater College’s (Va.) score of 74 points. In third was Centre College (Ky.) with 104 points, followed by Christopher Newport University (Va.) with 175 points. Top-finisher senior Eddie Mulder with an 8k time of 25:17 earned him seventh in the 174-runner field. Junior Tyler Cooke had a personal best of 25:41, ranking him 13th in the field, followed by senior Hank Ashforth in 19th place with a PR of 25:54. Senior Alex Fleischhacker and junior Patrick Crews rounded out the score.

The women’s side also showed strong performances with three Emory runners out of the top 13 finishers in the 193-person field. They registered 76 points, trailing Trinity’s 36 points. Following Emory was Bridgewater with 106 points and Centre with 149 points.  Junior Tamara Surtees finished in sixth place with a career best 6k time of 22:37 while Senior Captain Emily Caesar claimed eighth place with a time of 22:38. Junior Marissa Gogniat, freshman Michelle Kagei, senior Captain Meredith Lorch and junior Elise Viox rounded out the scorers. Lorch’s time of 23:24 was a personal best and Kagei’s time of 23:17 was her season’s best.

The 2012 Champions were North Central College (Ill.) with 167 points, earning the third men’s team championship in four years while Johns Hopkins University (Md.) captured the first place for the women’s team with a score of 158 points. This year’s appearance in the Championships is Emory women’s ninth straight appearance and 22nd in the past 23 seasons. This is the first time since 2009 that the men will be running at nationals.