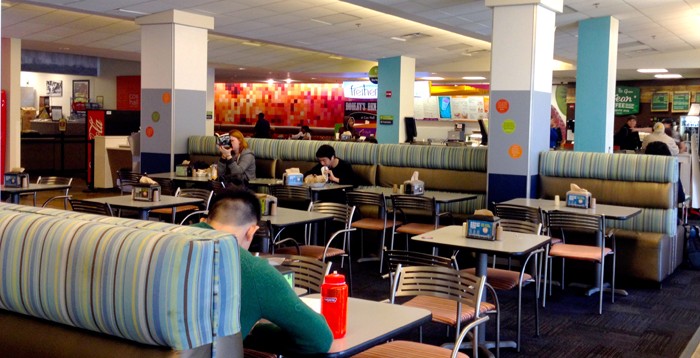 The inspection report, issued by the DeKalb County Board of Health, left Cox Hall Food Court with an overall score of 76 and noted violations of unclean food surfaces and utensils and improper timekeeping procedures, among other violations.

In one violation, the inspector found two containers of uncovered raw beef stored directly on top of ready-to-eat salad mix. The inspector also observed an employee touch salad with bare hands, according to the report.

Other violations included rinsing a sanitizer bucket and sauce dispenser in a vegetable sink; improper temperatures of chicken and rice; and meat thawing in standing water without running water.

DeKalb County Board of Health is scheduled to conduct a follow-up inspection on Nov. 5 because it earned a “C,” according to the inspection report.

At Cox Hall’s last inspection in June 2017, the facility received an overall score of 90. The inspection before that, conducted in January 2017, gave Cox Hall a score of 91.

Cox Hall will not be subject to another follow-up inspection if it earns a grade of “C” or higher, according to the Georgia Department of Public Health Rules and Regulations.

Letter grades are scored on a 100-point scale. Any score of 69 or below is considered “unsatisfactory.” An institution with an “unsatisfactory” score is required to undergo a follow-up inspection within 10 days and will be requested to voluntarily close if it fails.

The inspector corrected several of the infractions on-site and noted that some were first-time violations.

“We are disappointed by the recent dip in our rating from the DeKalb County Health Department and immediately held training refreshers with our staff,” Piper wrote in an Oct. 16 email to the Wheel. “I am confident that we will regain our excellent A rating when we are re-inspected.”

Lauri Schleicher (19B) said the results deterred her from continuing to dine at Cox Hall.

“I don’t want to go there,” Schleicher said. “If there’s any other choice, I’ll take that over Cox. The prepackaged foods I’d still be OK eating, but nothing else.”

Najla Phillips (17Ox, 19C) said she was also disgusted with the inspection results.