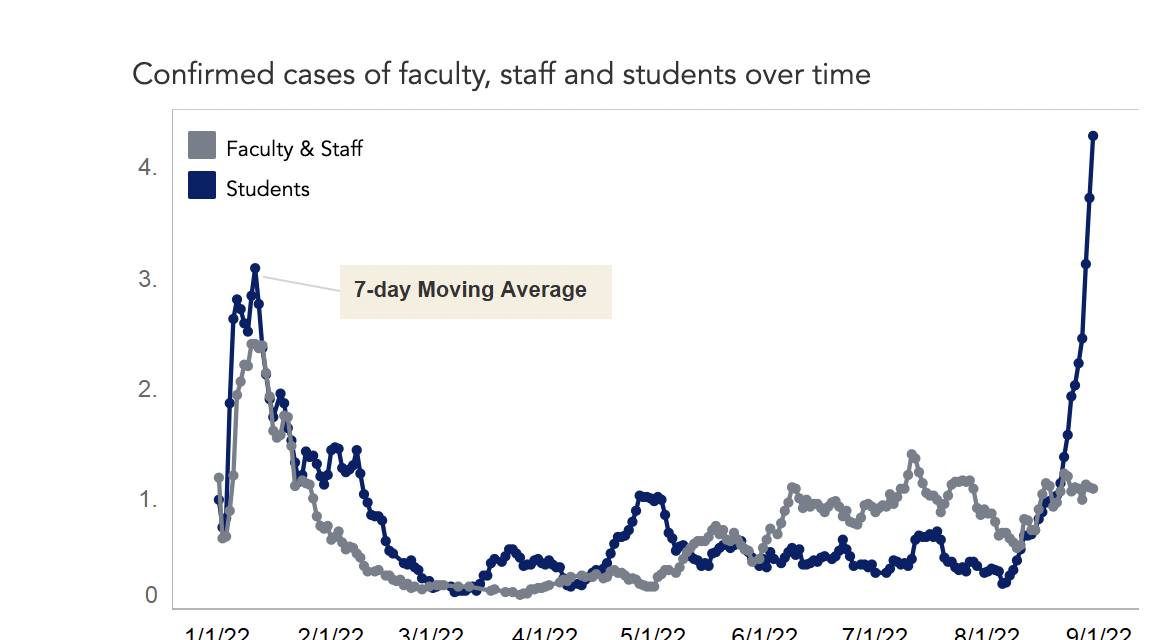 Emory University has experienced a surge in COVID-19 cases since the beginning of the semester, with 414 students, faculty and staff reporting positive tests in the last 10 days, Emory’s COVID-19 dashboard indicates. This is a 245% increase from the 120 10-day case count reported on Aug. 15, which was before many students returned to campus for the 2022-2023 academic year.

Chief Resilience Officer Amir St. Clair noted in an email to the Wheel that the University previously saw a similar trend, and expected cases to increase again as students returned to campus.

However, St. Clair reinforced that this increase in cases is not necessarily a “spike.”

“Instead, it may reflect how the emergence of new Omicron subvariants in late spring, which has resulted in cases rising across regional and national metrics since that time, are now being reflected across our campus community,” St. Clair wrote. 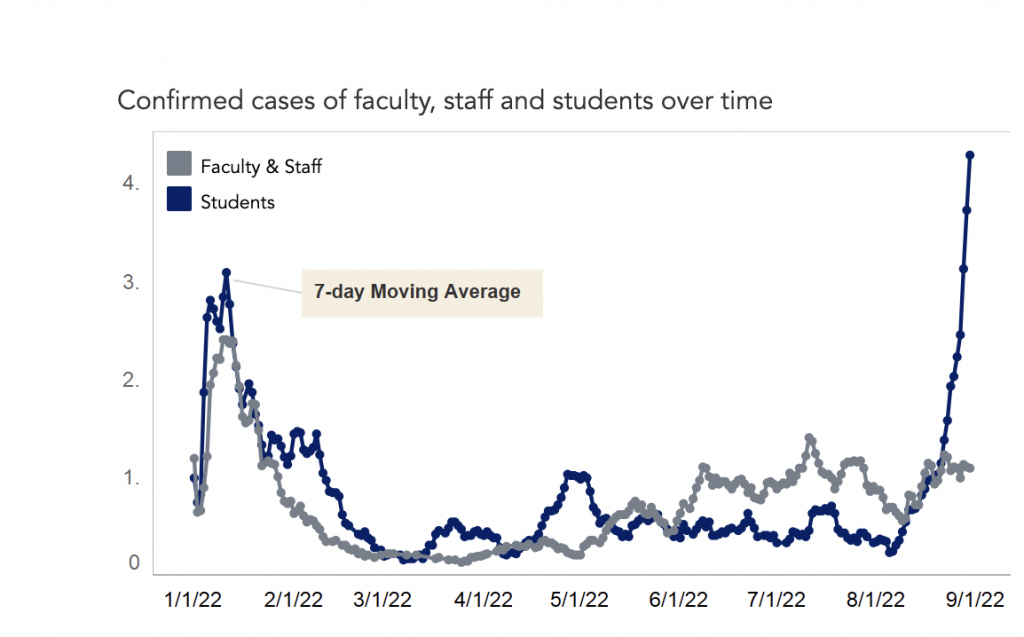 Trend of reported cases of COVID-19 on campus since August 2020. Graph courtesy of Emory University

The BA.2 subvariant of Omicron likely played a role in the increase in cases at Emory last spring, St. Clair speculated. There was a 178% increase in campus cases between April 16 and May 1 — jumping from 41 to 114 reported cases — while BA.2 accounted for about 68% of U.S. cases reported in the week ending on April 23, according to the Centers for Disease Control and Prevention (CDC).

The summer was also characterized by waves of Omicron variants. A subvariant similar to BA.2, BA.2.12.1, became dominant in late May. The nearly-identical BA.4 and BA.5 subvariants were widespread by July and remain prevalent. The BA.5 subvariant accounted for 88.7% of U.S. cases reported in the week ending on Aug. 27, according to the CDC.

St. Clair added that case rates are expected to rise even further as students learn about the University’s reporting requirements. The student community compact for the 2022-23 academic year states that by enrolling at Emory, students are agreeing to comply with COVID-19 policies, which includes reporting any positive cases through the “COVID-19 Reporting” form on the Return to Campus portal.

“Emory continues to have a community compact that requires all students to report any COVID-19 positive tests, and will continue to make reporting as efficient and convenient as possible,” St. Clair wrote.

However, there is no way to guarantee that students report positive at-home test results.

This is the first notable increase in cases under the University’s new COVID-19 operating model, which was announced on Aug. 11. The model features two levels: standard operations and heightened response state. Under the standard operating status, community members will be asked to remain vigilant and follow healthy behaviors such as hand washing. If COVID-19 cases increase, the University may shift into the heightened response status and implement stricter protocol.

“As Emory moves into its next phase of its pandemic response, the university continues to regularly review multiple risk indicators across our campus community, along with evolving public health guidance, to inform its operating model and any modifications to campus protocols,” St. Clair wrote. 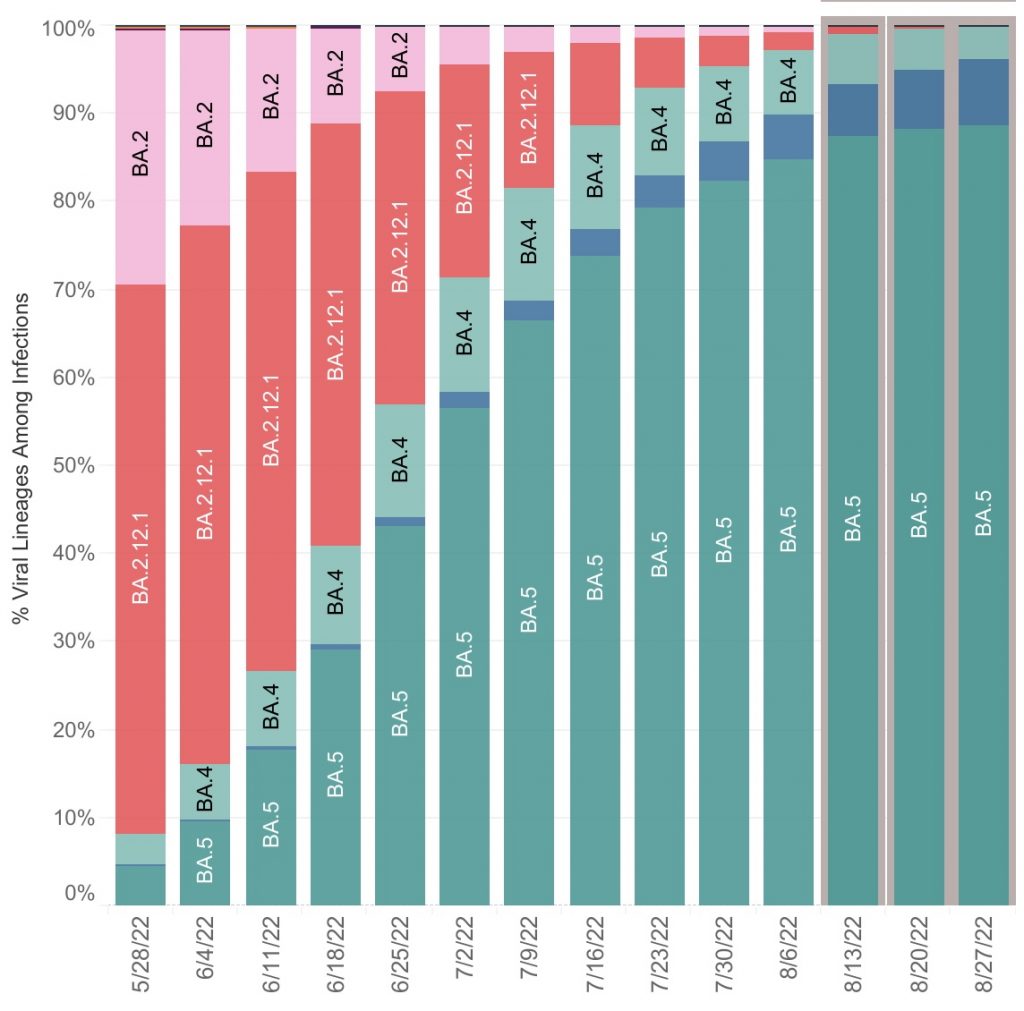 Prevalence of Omicron subvariants in the United States during the summer. Chart courtesy of the Centers for Disease Control and Prevention

The uptick in COVID-19 cases also follows a week of events welcoming students back to campus, such as Songfest, Culture Shock and First Day Fest. Many of the events brought in large groups of people without mask requirements.

There are currently no restrictions on the types of gatherings and events permitted on campus, although Emory recommends that events with more than 250 people reduce transmission risk through means such as moving outside, gathering in smaller groups, shortening the length of the event and providing masks.

St. Clair noted that in addition to event guidelines, it is important to consider the other safety measures being implemented by the University, such as vaccine requirements, enhanced cleaning measures, free masks and testing, isolation protocols and visitor policies. Emory also offers free testing, although less frequently than last year. Testing is currently available in the Emory Student Center on Mondays and Wednesdays and Clairmont’s Student Activity and Academic Center on Thursdays. Oxford College students can get tested at Murdy Hall on Tuesdays.

The second round of booster vaccines, which the CDC recommends for adults 50 years and older and some immunocompromised people 12 years and older, is currently not required by Emory.

“Should it become recommended for the general public, Emory would likely undergo the same type of review process we’ve done in the past to determine, ‘What are the public health imperatives and the recommendations for moving from a strongly recommended to a required setting?” St. Clair said.

The University is continuing to enforce its immunization policies “in alignment with other immunization compliance measures in place, including but not limited to enrollment holds and [Wi-Fi] restrictions,” according to St. Clair. The University restricted around 1,300 students’ Wi-Fi last spring because of their failure to comply with the booster vaccine requirements, and was met with national criticism. However, within a couple of weeks, over half of the affected students either submitted proof of vaccination or requested an exemption.

St. Clair added that the Emory community has the power to protect one another in the upcoming year.

“As Emory moves forward in its next phase of the pandemic response, all campus members should continue to be familiar with the protocols on Emory Forward, know what to do if they become sick or exposed, and continue practicing healthy behaviors,” St. Clair wrote.