Zhang Resigns After Constitutional Council Recommends Her Removal, ‘No Action’ in CC Elections 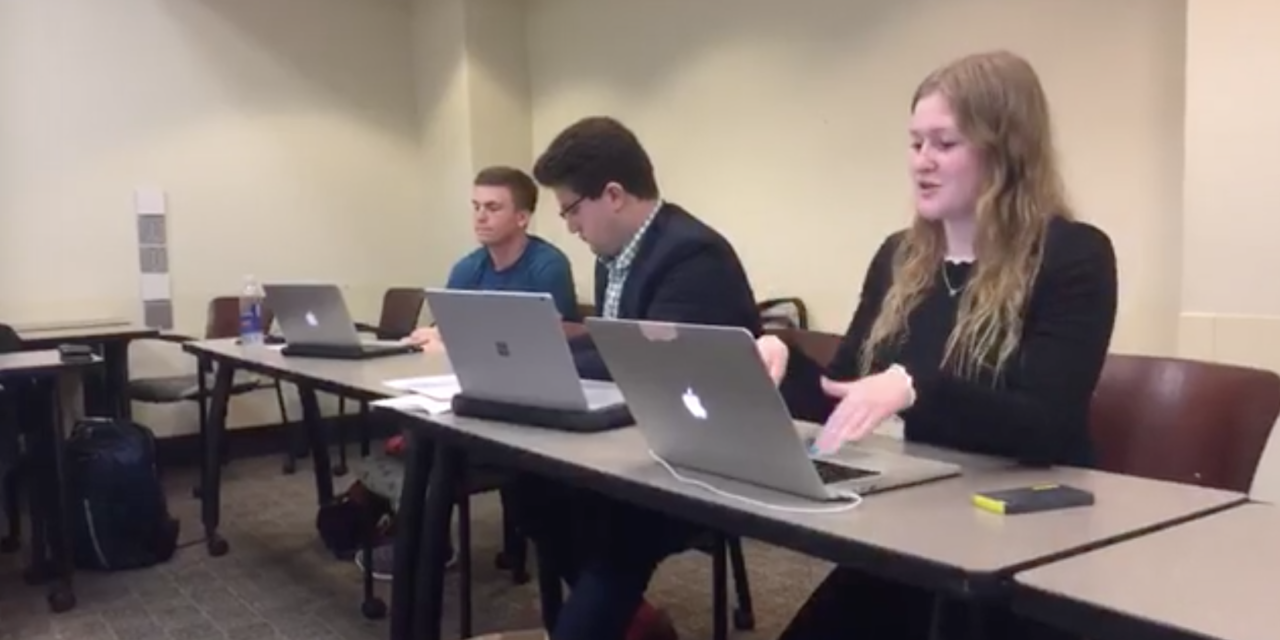 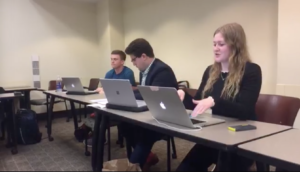 The Constitutional Council convenes Friday to discuss its first case in years.

Elections Board Chair Betty Zhang (20C) told the Wheel that she plans to resign from her position after the Constitutional Council recommended she resign or be impeached.

In its first case in years, the Constitutional Council upheld incoming College Council (CC) President Radhika Kadakia (20C)’s victory in the elections and admonished Zhang’s actions during the elections cycle.

Zhang informed SGA President Gurbani Singh (18B) of her resignation through text message on Tuesday, but Zhang plans on sending a formal email resignation on Wednesday, Singh told the Wheel.

The Constitutional Council’s recommendations came after two CC legislators filed a complaint with the Constitutional Council regarding the Elections Board’s exception for Kadakia’s late declaration to run for CC president, the Council recommended SGA take no action in the 2018 College Council (CC) presidential election results that saw Kadakia win with 640 votes (51.45 percent).

The Constitutional Council called for Zhang’s removal “considering the myriad of issues regarding her actions during the 2018 election cycle,” according to the March 30 case decision.

“I appreciate the Constitutional Council’s decision and the efforts of the justices in seeing this case so thoroughly,” Zhang wrote in an email to the Wheel before she confirmed that she was resigning.

CC Sophomore Legislators Alec Giufurta (21C) and Lyndsey Garbee  (21C) challenged the Elections Board’s 5-0 decision to allow Kadakia to run for CC president despite missing the March 18 deadline to declare her candidacy. In their original written challenge, Giufurta and Garbee wrote that they were challenging Kadakia’s candidacy “for the sake of maintaining a legitimate organization of elected institutions and members.”

Kadakia missed the March 18 deadline to declare her candidacy, but the Elections Board allowed her to declare her candidacy late in a 5-0 decision on March 19. After CC Vice President Naman Jain (18C) told Zhang that there were no other candidates except Tiffany Haas (19C), Zhang did not independently confirm. In fact, Paolo Mutia (17Ox, 19C) had also declared to run for CC president. Zhang told the Wheel that the Elections Board wanted to follow the precedent it had set by allowing Mario Karras (17Ox, 19B) to run even though he declared late due to “spotty Wi-Fi.”

Giufurta and Garbee contended that the Elections Board “allowed Kadakia to run based on misinformation; the Board of Elections did not have the authority to add late candidates for the sake of a ‘contested election’; [and] Kadakia’s late declaration was a violation of the Election Code,” according to the Constitutional Council decision.

Giufurta and Garbee argued that the Elections Board’s decision to unanimously prohibit Sania Chandrani’s (19B) candidacy for SGA president should have also applied to Kadakia; both candidates should not have been allowed to run if the same standards were set.

Zhang said that the Elections Board did not think it would have been fair to prohibit Kadakia from running since the Board had already granted an exception for Karras.

“We decided that a Wi-Fi connection should not be enough to disqualify a qualified candidate,” Zhang said at the hearing. “The logic that we were following was that if we allowed one exception for one candidate then there was no reason to not allow the other exception for [Kadakia] to run.”

Zhang confirmed that she sent both Kadakia and Chandrani a locked Google form to declare their candidacy after the deadline had passed. Kadakia responded to Zhang asking her to unlock the form, while Chandrani did not. Zhang said this was the sole reason why Kadakia was allowed to run and Chandrani’s appeal was denied.

“[Chandrani] never once even reached out to me,” Zhang said. “She could’ve communicated with me if she needed to fill out the form. At least [Kadakia] had the sense to reach out.”

Zhang did not communicate with Chandrani any further and said she took Chandrani’s lack of response as an assumption that she was no longer interested in running, despite the fact that Chandrani had emailed her before the March 18 deadline declaring her intent to run for SGA president.

Giufurta and Garbee also criticized Zhang’s incorrect belief at the time of deciding Kadakia’s case that the CC presidential race was uncontested.

Zhang said in the hearing that she “neglected” to check the Google form containing the list of all the declared candidates for CC president because candidates are allowed to change the position they are running for up to 72 hours after the closing of declaration of candidacy — a deadline that had not yet occured.

At the hearing, Zhang confirmed that she took Jain’s words at face value without confirming their accuracy.

“I do admit that there have been miscommunications,” Zhang said. “[CC’s] argument I thought was warranted. We should be able to have a contested election … which is why I thought if this was going to increase the competition … then I don’t see any bad sides to that, and that’s what I told my board.”

Giufurta said he perceived the board failed to act in an impartial manner when considering Jain’s argument.

At the hearing, Giufurta and Garbee asked for a retroactive redaction of Kadakia’s candidacy if possible, or if not, for the case to serve as a precedent for future election processes.

“We see the only fair way to make this a uniform process is to retract the candidacy of [Kadakia],” Garbee said. “If you don’t think retroactive application works for this [case], I think in the future it should be proactive in the sense that we shouldn’t allow these things to happen. Call this the precedent.”

In their ruling, the Constitutional Council found the actions taken by Zhang “to be fundamentally unfair to the candidacy of Chandrani,” one of the factors that led to them to recommend for Zhang’s dismissal.

“The Chair of the Board sent both candidates this [Google] Form knowing the link to the Google Form was inoperable as the Form locked out any submission past the March 18th deadline,” the decision reads. “The Council does not believe the Chair of the Board acted in good faith in her decision to assume Chandrani had dropped out of the SGA Presidential race solely because she, unlike Kadakia, did not email her asking for the required Google Form to be reopened.”

The Constitutional Council acknowledged that their decision is “unfair” to Chandrani’.

“The Council recognizes this decision does little to remedy the situation of Chandrani, who was prevented from running for SGA President by the actions of the Chair of the Board,” the decision reads. “However, considering the time frame of when this case was brought before the Council, just hours before the election was to be called, we see no viable and fair option to remedy Chandrani’s situation retroactively other than to offer future solutions to prevent this event from occurring again.”

In their decision, the Constitutional Council found this argument to be “in question” as “the Board holds the power under Part II, Article 1, Clause H to make such decisions at their discretion; therefore, the reasoning of the College Council candidate for why she should be allowed to declare late is neither important to this case nor sufficient to justify the request made by the Petitioners.”

The Constitutional Council also dismissed claims that the Elections Board acted outside of their constitutional authority by allowing multiple candidates to declare late.

“The deadline [to declare candidacy] can be extended and exceptions to it granted by a two-thirds vote of the Elections Board with quorum under Part II, Article 1, Clause J, which is the exact action taken by the Board through Clause H investigation provision,” their decision reads. “Therefore, while Kadakia did declare late, the Board was well within its power to allow her to join the race and thus, this alleged ‘violation’ is unsubstantiated.”

In their ruling on Karras’s candidacy, the Constitutional Council found that “his situation was sufficiently unique and differentiated from the situations of Kadakia and Chandrani,” and “the actions of the Board towards his candidacy to be fair and within the powers delegated to the Board.”

The Constitutional Council also recommended that the SGA “pass a bill that prevents future key election dates, including deadlines for candidacy and voting periods, from occurring during any school-sanctioned break, such as spring break, or during major religious holidays, to prevent a recurrence of many of the issues plaguing this year’s elections.” This year, the deadline to declare was the Sunday that spring break ended.

Update (4/3/18 at 11:38 p.m.): The article and headline were updated to reflect Zhang’s resignation as chair of the Elections Board.