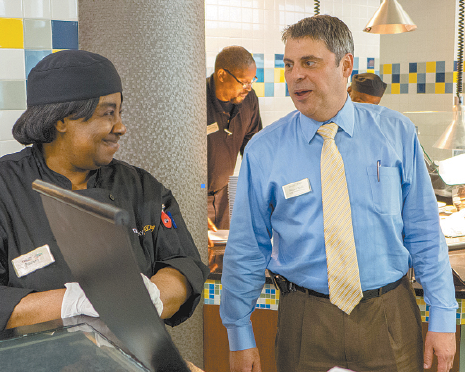 He chose culinary school over college, the title of “kitchen grunt” over “engineering major,” and the satisfaction of cooking a perfect filet mignon over solving a numerical analysis equation. Now, at 47, Michel Wetli is applying his years of experience in the kitchen and passion for cooking, as well as his mathematic, business and leadership skills to please his “toughest” customers yet: college students.

As the general manager and campus executive chef at Emory University, Chef Wetli is focusing on satisfying collegiate taste buds while also looking for ways to integrate local and sustainable foods into Emory’s on-campus dining program.

Sustainable food has better quality and helps support local farmers, explains Wetli. He is continuously designing menus that utilize local and seasonable products from farms in Georgia, including White Oak Pastures and Springer Mountain Farms. He works with the Sustainable Food Committee at Emory to help it achieve its goal of procuring 75 percent of ingredients throughout campus cafeterias and hospitals from local or sustainably-grown sources by 2015.

Wetli became interested in sustainability in 1987 when he was a chef at Pinon’s Restaurant in Aspen, Colo., which offers local, wild game from a ranch 40 miles away and wild-caught fish on its menu. Since then, “Sustainability has been interwoven throughout my career,” explains Wetli. “When I came to Emory, it worked out wonderfully since Emory was doing work in other areas of sustainability.”

Emory’s sustainability program is the largest that Wetli has been a part of, but he never let that intimidate him. The program has improved significantly since his arrival on campus eight years ago, according to Todd Schram, director of operations for Emory Dining.

Under Wetli’s management, “Emory Dining continues to be a leader, nationally among colleges and universities,” stated Schram, who associates Wetli’s numerous attributes with the program’s success.

“He is very knowledgeable, professional, disciplined and experienced…you don’t find too many really good chefs who are really good managers, but Michel is one of the exceptions,” said Schram. “We would be a different team and a different operation without Michel.”

Wetli’s journey to Emory began in 1965 in Ottawa, Canada, when he was born into a family of food enthusiasts. His father was a chef for various hotels in Toronto and Montreal, including the Royal York Hotel, and his grandfather was the corporate executive chef for the hotel department of the Canadian Pacific Railway.

Wetli lived in Canada for only two years after which his father left the hotel industry to work for LSG Sky Chefs, an airline catering company in Detroit, and he took the family with him to the U.S. They moved frequently throughout the following 18 years because of the airline food service business, so Wetli grew up in a variety of states across the U.S., including Michigan, California, Colorado and Pennsylvania. Despite his American upbringing, Wetli was frequently exposed to Dutch, Swiss and Jamaican cuisines, because his mother was born and raised in Holland and his father, who was also half Swiss, in Jamaica.

“Being a chef is kind of in the blood,” Wetli explains with a subtle smile, while reminiscing about his childhood and how his taste buds and passion for food developed at an early age. He recalled the main rule his dad enforced at the dinner table when growing up: “You at least have to try it even when you’re a little kid.” The influence of these rules showed when Wetli turned 15 years old and decided to cook professionally at Maxwell’s Too, a local pizza shop in Denver.

At the time Wetli also showed signs of a promising future in engineering because of his exceptional skills in math, so it looked as if he was going to follow a traditional collegiate path. He was taking college preparatory classes for engineering while still in high school and “was probably going to be an engineer, the way I was going through life,” recalled Wetli. “But I just started cooking and fell in love with it and just couldn’t stop.”

Wetli made the decision to pursue a career as a chef at 18 years old, when his parents moved from Colorado to new jobs in Pittsburgh. He told them, “I’m staying here.” Wetli spent the next year working for the hotel restaurant in the Denver Hilton Inn South to make money before attending the Culinary Institute of America in Hyde Park, N.Y.

After graduating in 1987, Wetli attended Madeleine Kamman’s School for Young American Chefs in the Beringer Vineyards of Napa Valley, Calif. Since his graduation in 1990, Wetli worked as an executive chef for more than six restaurants, including Stone Mansion Restaurant in Pittsburgh and the Rockaway River Country Club in Denville, N.J. He has also cooked for Princess Diana of Wales, one of the Saudi Arabian Princes, the Dalai Lama and President Jimmy Carter.

Wetli’s cooking style is rooted in classic technique, and is still evolving because of the extensive traveling he does with his wife, Kathleen. He takes what he learns from each country and recreates the authentic ethnic dishes back in the U.S., since “my favorite dish to cook is my next dish, the one I haven’t made.”

His culinary education and experience in fine dining restaurants also shows in his cooking style; he takes the preparation of every dish very seriously, paying particular attention to flavor combinations. “You could have a normal steak, and I could take it and make it taste like something you’ve never had before,” said Wetli.

So how did he end up working in a large-scale position at a campus after 25 years of restaurant work? Wetli said he “wanted a change” and to “just keep progressing.”

He was working for Sodexo, the leading provider of integrated food and facilities management services in the U.S., Canada and Mexico, before he was initially hired as Emory University’s campus executive chef in 2004. He became the general manager as well in 2009, which allows him to exercise the mathematical talents that he gave up to become a chef.

“Balancing budgets, running P&Ls…that came naturally,” says Wetli. “Being able to combine that and be a chef; that’s been great.”

According to recent surveys, diner satisfaction has increased over 30 percent since Wetli became general manager, and the campus is also used as a showcase for Sodexo North America.

Improving Emory Dining is not an easy job, though. Wetli is in the Dobbs University Center (DUC) kitchen from lunch until dinner, working with the chefs and staff members to make sure everything is in order, from the moment the doors open for breakfast to when they close after dinner.

“He is willing to work extremely hard to improve Emory Dining,” said Karoline Porcello, an undergraduate student at Emory University and co-chair on the Food Advisory Committee at Emory (FACE).

Michael Sacks, an undergraduate student at Emory University and the other co-chair on FACE, particularly admires Wetli’s quick responses to student requests. He recalled one day when “we asked for eggplant parmesan for dinner and he made it happen without hesitation.”

Wetli makes things happen by being an authoritative presence in the kitchen through his energy, enthusiasm and attention to food preparation. The multicultural Canadian of medium-height, with short gray hair and a clean-shaven face, moves from one food station to another, lending helpful tips to employees and some compliments for encouragement. He is always wearing black dress pants and shoes and a button-down shirt and tie, so Wetli is hard to miss among the steaming stovetops and bustling employees in aprons.

Amidst the whirl of daily meal preparation and service, you can tell Wetli still “really loves his job,” said Barbara Jones, a staff member for Emory Dining at the DUC and a resident of Atlanta.

Not even the harsh food critics of Emory University can discourage Wetli with complaints, for he uses them as motivation to ensure things are better the next day, by taking an honest and hands-on approach with his staff.

Wetli also makes a difference outside of Emory’s campus by applying his take-charge approach to charity work. He likes to “empower people” and did exactly so while working at Top of the Triangle in Pittsburgh from 1997 to 2001, when he started a program for recent prison inmates that provided entry-level jobs such as dishwashing or food prep.  He recalled one particular prison inmate who contacted Wetli more than 10 years later as an executive chef in Miami, thanking him for helping him out. “It’s just that one person,” said Wetli. “That’s all it takes.”

When he is not in the kitchen, traveling or doing charity work, Wetli is working through stacks of papers at his desk, managing and overseeing labor and food costs, financial reports, customer service and chef training. Because the math whiz enjoys the business side of his work, Wetli considers his current senior management position the ideal job. “I would love to stay at Emory for the rest of my life if I could,” says Wetli.

Although he admits to having serious and straightforward sides, outside of work Wetli is an adventure enthusiast who is into extreme sports, including snow skiing, scuba diving and mountain biking. You might also find him gardening, fishing or even refinishing and restoring old furniture in his free time.

He describes himself as mainly “a fun-loving person” who enjoys family and good times, even though he and his wife, who married in 1997, do not have any children. They enjoy teaching their nieces and nephews how to cook and having friends and family over for dinner at their home in Decatur, Ga.

Looking back on the decisions he has made since his teenage years, Wetli is more than pleased with how his life has turned out. The quote at the end of his bio in bold, capital letters says it all: “Love life, love my wife & love to cook!” 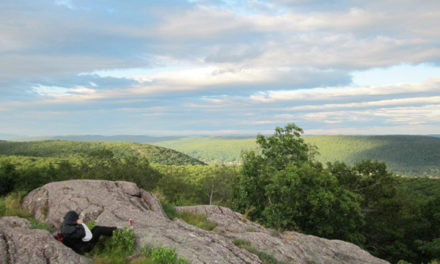 Explore Atlanta Through These 5 Landmarks