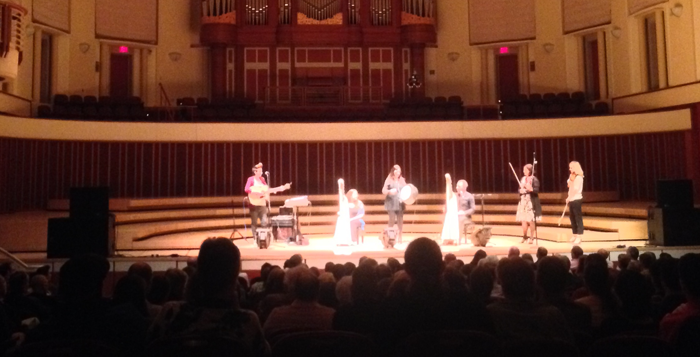 Across campus from the traditional Dooley’s Week events, Emory experienced a bit more than chocolate fountains and Chance the Rapper last week.

I entered Emerson Concert Hall rather apprehensively, as only a guitar and keyboard synthesizer greeted me on the left of the stage and two harps sat alone on the center and right of the stage – I had done my research, but I still had no idea what to expect.

Both Brennan and De Barra are native Irish Gaelic speakers who work to preserve Ireland’s unique musical heritage, and this “Voices & Harps” (after their 2011 album of the same name) partnership puts this preservation at the forefront.

Although traditional Irish Gaelic songs hold a special place in their repertoire, these songs are intermixed with instrumentals and songs sung in English.

The character of their work is surreal and relaxing, as their voices are sweet and harmonious, with only the harp and guitar or flute acting as accompaniment.

How this concept was to translate to a live performance was wholly lost on me.

I was curious to see how it could be done, and I took my seat in Emerson Concert Hall, ready to listen.

The hall, a bit less crowded than usual, was quiet until the three musicians walked onto the stage, at which point they were greeted with polite, but vigorous, applause. The harpists went to their harps, the guitarist to her guitar.

The lights dimmed, and the performers began to play without a single word.

Vocal balance issues made it difficult to appreciate Brennan’s singing in the first piece (a traditional Irish song) as anything resembling words: the sound was muddy and difficult to decipher.

Whether it was only for want of a warm-up on Brennan’s part (jet-lagged, after coming from Ireland) or an issue with the sonic balance of the amplification, the issue was resolved by the start of the second piece, and the concert continued without any further technical glitches.

Of the traditional Irish songs, two sung in Irish Gaelic stand out as particularly exceptional performances. “Sean Duine DÃ³ite,” which closed out the first half of the concert, relates the tale of a young woman who married a wealthy old man, expecting him to soon die.

But he has, as De Barra put it, “other plans” and the young woman finds him full of life, forcing her to look for ways to hasten his death.

As Brennan and De Barra explained onstage, a variation of the song can be found in almost every Irish county – a quintessentially Irish tune.

The audience laughed throughout the explanation of the piece, and during its performance, I could see the entire hall moving in time to its tempo.

Another piece worth mentioning is a lullaby that De Barra explained his grandmother would sing to him before he fell asleep: “SeoithÃ­n SeÃ³.” Peaceful and evocative of sleep, the lullaby had a profoundly moving effect on me.

It certainly made me feel at rest, and De Barra’s luscious singing simply made an already beautiful piece a surreal experience.

It was an enjoyable night, with the banter between Brennan and De Barra bringing consistent laughter from the audience, with De Barra acting as the ever-amiable sideman. The music was part of a healthy, well thought-out program that stuck to its guns.

Pieces that are not traditionally performed on harp were selected carefully, such as the 1980 Grammy-winning Christopher Cross single “Sailing,” and the duo kept any of the selections from feeling gimmicky.

The performers even utilized audience participation without resorting to clichÃ©d gimmicks, teaching the crowd choruses so that they might join in the song, too.

The concert closed out with a lively encore performance, for which Brennan and De Barra called up two fiddlers from the audience to join the group on the stage.

The ensemble brought the audience to clapping along, and by the end of the song everyone was involved.

It was a strong, positive end to a solid, if eclectic concert.

I certainly gained a greater appreciation for my own Irish heritage and a renewed interest in learning about the past.