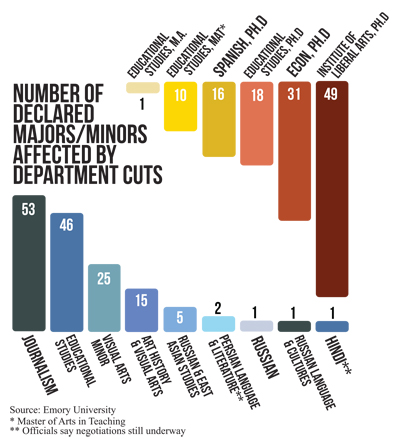 After the College and Laney Graduate School announced a series of shutdowns and suspensions last Friday, many students and faculty demanded to know about the specific criteria used to determine how departments and programs were selected.

As the Wheel reported on Tuesday, College Dean Robin Forman based many of his decisions on talks he had with a committee – one that, until now, had remained relatively unknown to students.

The origins of the Faculty Financial Advisory Committee stretch back to late Fall 2007 under former College Dean Bobby Paul.

At a time when the financial markets started to collapse and university endowments across the United States were hit hard, Paul established a group of faculty and administrators to advise him, according to Micheal Giles, a professor of political science and the chairman of the Faculty Financial Advisory Committee since 2008.

In the spring of 2008, the group emerged as an official subcommittee of the Governance Committee consisting only of eight faculty members.Given the constant state of flux of the University’s finances, the committee met at least twice a month for the first two years, Giles said. During that time, the committee reduced funding for various institutes and programs in ways that had “minimal impact on the experience of students,” according to Giles.

There came a point, though, when members of the committee became concerned that the dean would request that certain programs be eliminated.

“When you’re confronted with the shortfalls that were being predicted, we realized that we could be asked at any moment, so we set about to school ourselves,” Giles said.

With permission from the dean and the provost, the committee acquired exhaustive documentation: department-planning materials, department self-evaluations, patterns of enrollment, course cross-listings with other departments, external reviews – everything, Forman remarked, just short of an individual’s salary.

The committee, then, set criteria and parameters for evaluating departments.

“Thinking in terms of scholarly distinction and potential for eminence of programs, how much does it take to move a program up? Some are more costly than other,” Giles said. “How distinguished is a department? What’s its role in the liberal arts? How essential is it? If it’s excised, can you still have a viable liberal arts program? Interdependence [with other departments] goes into that [criteria] as well.”

Giles also said that a key consideration was a department’s centrality in the liberal arts. Without mathematics, for example, physics and biology would be undermined.

In addition to the committee’s recommendations, Forman and other administrators had their own thoughts, according to Giles.

Once Forman finalized everything, he presented his plan to the committee, which approved the measures.

“This is a relative judgment,” Giles said. “We’re not saying we don’t value journalism, that we don’t value educational studies. What we’re saying is that when you think about the criteria, there are others that came out further up in the consensus of that judgment.”

Giles also noted that the decision was not an effort to “share the cuts equally,” but really to focus on where there was the possibility of pursuing “eminence.” In the same spirit, Forman has stressed the need for the University to “narrow its scope.”

Richard Rubinson, another member on the committee and an associate dean and professor in sociology, further elaborated, “We’ve collectively created this problem. When you think about the number of programs that have proliferated in the University in the last 20 years, something had to give. This is what happens when you have an unregulated spiral of expansion.”

Back in 2008 when his colleagues asked how the situation was looking, Giles said he would always “lie” about how well everything was going.

“If people had known about the kinds of talks we were having, there would have been widespread panic. But nothing came of it,” Giles said. “Nothing we’ve ever talked about has been leaked to anyone.”

Hank Klibanoff, the director of the journalism program, said he disagrees with Giles’ thoughts on transparency.

“That’s the problem in a democracy,” he says. “You’re always going to be open to argument because you include people. I’d be sorry to hear if any institution that I’m part of decides that the people most affected by the decision can’t be part of the discussion because they might disagree and because they might become emotional.”

Giles said he understands the recent complaints about a lack of transparency, but does not think the issue is a one-way street.

“Some of that isn’t hearing,” he said. “I’ve been in meetings with chairs and directors, and I’ve heard [the deans] lay out these kinds of issues, and to think that there were going to be no consequences, no difficult decisions to be made downstream is just not hearing what’s being said.”

Giles also said departments have their chance to make cases for themselves.

Departments and programs are required to perform self-evaluations in which they write what they have accomplished, where they stand in their mission and what their plans are in the future.

“If you don’t think people are going to take those materials seriously, you need to think again,” he said. “So when you say, ‘I haven’t had a hearing,’ this is like ‘you’ve submitted briefs, but you just didn’t get oral arguments.'”

Giles said he loses sleep over these kinds of decisions and wishes the communication process was clearer. On the flipside, he isn’t sure what the solution would be, fearing that too much transparency would damage the University.

“I’d rather take the heat for a lack of transparency than see the antagonism of ‘why this department and not that one’ that comes from open discussion,” he said.

Additionally, he stands by the plan as an important move for the University in achieving its ambitions and making diplomas for its graduates more valuable in the future.

Barbara Patterson, a senior lecturer of pedagogy and another member of the committee, said she is proud of the way the community came together during Monday’s discussion on the Emory Quadrangle and believes in an evolving process.

“When we all keep working together to make the process stronger and more transparent, we are changing things,” she said. “I know that Dean Forman has said that the decisions are the decisions, but things aren’t over. The processes aren’t over because when the process dies, the community dies.”

Correction (12:19 p.m.): The chart has been updated to show declared majors/minors affected by departmental changes. This chart does not show the number of students taking classes in these departments.  The original chart said “affected students.”