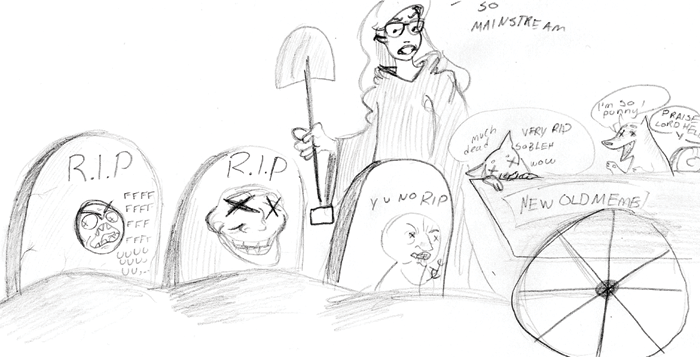 Comedy is perfect now. The Internet meme signals the completion of the joke. We are now watching the joke ascend into a new information exchange. Memes, sophisticated and pure, are viral blips – they assert themselves as the end of comedy for two reasons: they invite their industrial reproduction and they invite their death.

The meme is the final stage in the evolution of comedy. The birth of a specific meme is always an arbitrary miracle, bordering on epiphany. Even those memes that enter the undercurrent of web notoriety are empty jokes. The meme itself is only a template that acquires humor through its modification and hyperactive duplication. The meme is only funny because we’ve seen it a hundred times. Removed from the context of its reproduction, it is entirely worthless.

Memes are also wired for their own annihilation; their very method of humor seals a certain destiny – their death. Memes are always flirting with this line of life and death. Their capacity to be recycled has its ethical limits – when they become too derivative, they are instantly destroyed. Yes, we have developed an ethic of the meme: they are to be repeated as much as possible until we get tired of this repetition. We trust the meme because we trust that, when the virtue of their humor is exhausted, they must go away. Memes have different lifespans, but they all end up in the same digital graveyard. This typically happens long before the meme is defiled by marketing initiatives.

The meme resists all economics – those who wish to profit from a meme, to “sell” a meme, invariably sabotage it. Branding memes has always failed simply because the meme has no use other than its death-obsessed reproduction. The meme is not merely the image itself, but the image’s replication. It is the joke that gets funnier the more it is told, its mode of humor is replay and irritation. So as soon as “Success Baby” was plastered on t-shirts and used in a Virgin Mobile commercial, the Internet had long scurried away, as if it were a vivid nightmare that needed to be force-forgotten.

Since the ancient Greeks, many thinkers have gravitated towards the theoretical examination of humor. “Laughter,” the collection of essays by philosopher Henri Bergson, is a notable example, wherein he establishes a deep relation between comedy and rigidity. According to Bergson, comedy’s aim is to make us laugh at “inelasticity.” Comedy arises when the movement and change of life is contrasted with a person who seems rigid, mechanical or absentminded. Humor takes up a particular function: it motivates us to be fuller people, more alive, more receptive to change – and less like programmed machines.

We see a concrete example of this in the banana peel gag. Beyond the specificities of the situation, what we find fundamentally funny is someone who cannot adapt to the world; walking on their normal route, they slip and fall on an unexpected obstacle. This is human inelasticity – an expectation that the world will be the same every day, that we can fall into our habits and continue living per usual. On a basic level, comedy is always playing with the conflict between life and automation.

This humor of inelasticity is a crucial element in popular television (currently the most prevalent dissemination of comedy), which has a striking resemblance to commedia dell’arte. Commedia dell’arte is an European form of theater where masked actors perform as stock characters placed into certain generic situations. Most shows, particularly the sitcom, function off their stock characters being placed in semi-different circumstances. The characters are habits, they are caricatures of themselves – the derived humor here is through the predictability of their actions within an indecisive design. The design itself is what changes, the characters remain relatively fixed within it. Commedia dell’arte has an idiot: Pulcinella, and so does the contemporary comedy: Cosmo Kramer from “Seinfeld,” Charlie Kelly from “It’s Always Sunny in Philadelphia.” There are also the greedy: Pantalone in commedia, with Mr. Burns from “The Simpsons” and Lucille Bluth from “Arrested Development” as contemporaries. When these stock characters confront a changing world, we have humor.

Jokes themselves are formulaic. They fall into a particular pattern of unfolding, usually with minor adjustments. “X walks into a bar,” and so on. From this, we got the anti-joke. The anti-joke plays on this formula, it torments the structure of the joke through two ways: absurdity (ad infinitum), or insane denial of itself (non sequitur).

The meme is essentially the anti-joke structure pushed to its maximum capacity. While jokes play on the inelastic, they are machines themselves. The anti-joke is about the joke, or rather, its joke resides in its telling, not its content. The typical joke is a resistance to inelasticity of life, but it is defeated by its own construction – the anti-joke, then, is a kind of meta-resistance. Memes play out their own tragic parody. In their constant re-creation, they resist all structure and all repetition. Through the very medium of repetition they express this counteraction.

The meme destroys the joke through its very mode of joking, and there is self-awareness here: something hilariously catastrophic about a macro image of a dog’s face layered with block text of horribly unethical advice. The meme is not merely self-destructive, but is, in fact, a martyr. Its own process of humor, its profundity, is exactly what leads it to die. It must die, it must always be ready to die, or else it becomes rigid. It is wild and always on the verge of death.

We have created the super-joke, the joke that accomplishes what humor, to this point, never could. The meme is a living thing, through its telling it becomes conscious of its own mortality. It operates through supreme and ridiculous imitation of the joke. Memes mass-produce themselves but they are not commodities; they are cemented to an ironic conveyer belt that leads to nowhere and nothingness – they serve no purpose other than to annoy. But the more annoying they get, the funnier they get. And the funnier they get, the more we resist their rigidity (and all rigidity in general – the whole structure of everything seems annoying now: political frameworks are threatened by the meme). They are designed to be hated – this is the final joke, the dematerialization of the joke’s object.

Through editing software, unforgiving wit and the naturally epidemic nature of the Internet, we have ushered comedy into its own zenith. It is now set to undergo an eternal death. Sites like 4chan, reddit, dump and generic meme generators have become the stage for this perfect tragicomedy of resistance and detachment to play out into eternity. Comedy is not gone, but it is done. It has mutated into the most terrifying form to carry out its task. The meme invites us to create, modify and revel in its thousandth rebirth – but most of all, to grin in satisfaction at its death.

The author’s name of this piece has been removed due to personal circumstances. If you have any questions about this decision, please email [email protected]