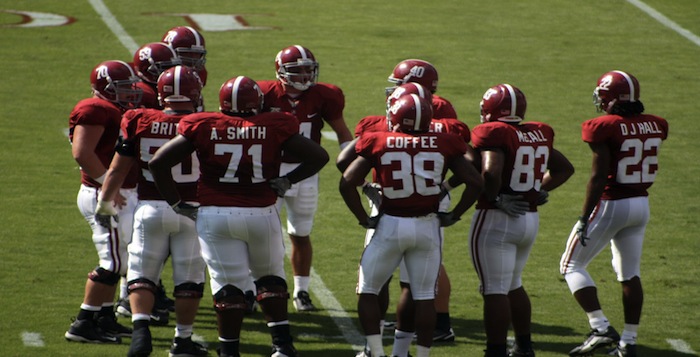 Take your pick – an 18-inning marathon of playoff baseball that spans over six hours and ends on a single dramatic swing, or a college football upset that spurs a mob to pluck $4,000 goalposts out of the ground and parade them around campus until they find a home inside a student’s apartment.

On any normal weekend, sports fans would be fortunate to have any one of these results play out in front of them. But October is not subject to the rules that govern the other months of the year. October is special, and its opening weekend did not disappoint.

The term wildly is not used loosely here, as Oxford, Miss. played host to a parade of Vaught-Hemingway Stadium’s goalposts – ripped out by a horde of students as they charged the field – and to Katy Perry’s bar-diving shenanigans following the victory. But the night was still ramping up in the scope of this wacky Saturday, even as the clock ran out on the Crimson Tide.

The San Francisco Giants began their game at 5:37 p.m. for viewers here on the East Coast, and the 18-inning game lasted six hours and 23 minutes, taking 485 pitches to declare a winner – the longest game in playoff history. The Giants’ Brandon Belt put an end to the suspense with his 413-foot solo shot.

That was just Saturday.

With nine games decided by just one score and two that ended in overtime, the NFL made a strong case to keep with the precedent set the night before. Peyton Manning had a fantastic game, notching his 500th career touchdown pass and leading the Denver Broncos to 568 yards of offensive production against the Arizona Cardinals, the most in the Bronco’s history.

Less than 24 hours after what could be called the Giants’ doubleheader, Kansas City finished their swift sweep of the Los Angeles Angels of Anaheim, the regular season’s winningest team.

The Royals are participating in the playoffs for the first time in 29 years and they’re taking measures not to disappoint. They are playing an extremely aggressive brand of baseball, even setting a playoff record for stolen bases in their Wild Card game against the Oakland Athletics with seven steals. The conglomerate of predominantly homegrown players has nothing to lose, making them one of the most enjoyable teams to watch.

This past weekend was one of the most action-packed weekends that the sporting world has seen in some time. Every league featured moments that could be immortalized.

College football saw Ole Miss lose its mind, beating Alabama for the 10th time since 1894 and doing it in dramatic fashion on an interception in their own end zone to put the game away.

MLB is holding its playoffs, of which all but three of 12 games have been decided by one run or have gone into extra innings. Finally, the NFL is watching Manning cement himself into the greatest of all-time conversation after joining Brett Favre as the only other quarterback to tally 500 touchdown passes and doing it in 49 fewer games than Favre. Take a deep breath now because this weekend could get even crazier.

Starting on Wednesday, your sports ticker will once again include the scores of regular season hockey. Make sure the picture-in-picture feature on your television works, or consider investing in two or three more TVs, because there will certainly be viewing conflicts this weekend – hockey is back.

Montreal will face Toronto to open up the season but the marquee matchup of opening night is the San Jose Sharks vs. the Los Angeles Kings. Saturday will see the Edmonton Oilers visit the Vancouver Canucks and Sunday’s game to watch will be Toronto’s Maple Leafs taking on the New York Rangers.

In college football action this Saturday, No. 2 meets No. 3 in Starkville, where Mississippi State University hosts the Auburn University Tigers. To the west, another top-10 game will take place during the same 3:30 p.m. time slot, when ninth-ranked Texas Christian University visits fifth-ranked Baylor University. The list of intriguing matchups goes on: Oregon at UCLA, Ole Miss at Texas A&M University and Georgia State University at the University of Missouri. Each one is a contest between two top-25 teams that will have a significant impact on the championship hopes of many, as teams are now avoiding second losses.

The American League Championship Series opens Friday in Baltimore, and the Royals are determined to make something of their first playoff birth in 29 years. However, the Royals played in a World Series in 1985, more recently yet than the Baltimore Orioles, who last played for the title in 1983. Both teams are hungry to give their city a chance at the championship.

Finally, the NFL will have a trio of games that many people will and ought to be keeping an eye on. The Carolina Panthers will face the Cincinnati Bengals at 1 p.m. The Dallas Cowboys hope to prove themselves further against last year’s Super Bowl champion – the Seattle Seahawks. Football night in America will see the divisional battle between the resurgent New York Giants against the Philadelphia Eagles.

Contrary to the holiday songs, this is the most wonderful time of the year. Not even April, which sees the NBA playoffs, the NHL playoffs and the start of the MLB season happen simultaneously, can compete with October because, well, football.