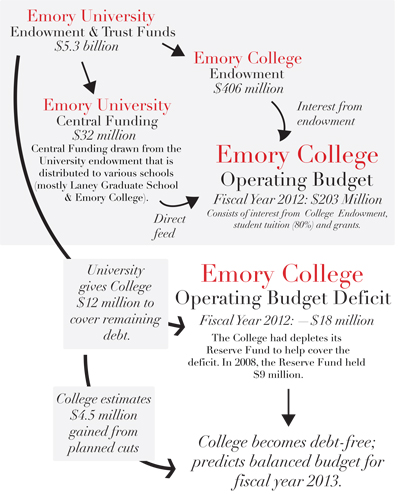 University administrators expect the College to end this fiscal year with a balanced budget, marking the first time since 2008 that it has not emerged with a deficit.

In the past, the College used money from its reserve accounts to cover any deficits it incurred in a particular year. The College placed excess funds from any year it had a budget surplus into this account, which held approximately $9 million in 2008.

In an interview with the Wheel, Michael Mandl, the executive vice president for finance and administration, remarked that the College has not had a budget surplus for the last three years.

As a result, the College no longer holds any money in its reserve accounts. According to Charlotte Johnson, the senior vice provost of administration, the College has depleted these funds by using them to cover recent deficits.

In the past, reserve funds were used for faculty recruitment and renovations as well as other operating costs, she wrote in an email to the Wheel. Mandl remarked that each University school and academic subdivision has a reserve account.

These accounts are crucial for each school, which uses their reserve monies for “very important, strategic, one-time purposes,” he said.

“Traditionally, if a school has a revenue shortfall or unusual expense in any given year, the first task is for them to look to their reserves to keep themselves whole,” explained Mandl, who added that the University has its own reserve account.

Johnson noted that the University reserves account “has been essentially zero” for the past two to three years. She said that the University was forced to use a significant portion of its “center resources” to help out its individual schools affected by the averse “market conditions” that followed the 2008 financial crisis.

The University distributes approximately $32 million in central funding to its various schools – the majority of which goes to the Laney Graduate School (LGS) and the College, according to Johnson.

These funds come from the annual total University endowment and trusts, which is currently about $5.3 billion.

In particular, the College, whose current endowment totals $406 million, has received a total of $12 million since 2008 from the University to help it cover its recent deficits because it has not had sufficient funds to do so it on its own.

However, after the College received central support for its deficit at the end of the last fiscal year, the University collaborated with College administrators in order to develop a more sustainable financial model for the school.

“The basic terms [to this central support] were these are one-time dollars and not to be the solution to the deficit problem in the College,” said Earl Lewis, the University provost and executive vice president for academic affairs, in a separate interview with the Wheel. “The College can’t be taking funds from the central University on a continuous basis. They had to figure out some kind of way to not keep having a deficit.”

According to Mandl, administrators expect that the College’s new financial model, which mandates that it “invest in the highest priorities,” will allow for it to have a balanced budget at the end of each fiscal year. Robin Forman, dean of the College, announced his plan for academic reorganization in a Sept. 14 University-wide email.

This plan, which goes into effect at the end of this academic year, will gradually phase out certain undergraduate programs and departments.

In addition, the plan will enact a moratorium on admissions to graduate programs in economics, Spanish and in the University’s Institute of Liberal Arts.

The College supplements the funding from LGS that goes towards fellowships for graduate students who do not receive external grants.However, College faculty members who also teach graduate courses receive their salaries entirely from the College.

This is because these “graduate students [support] the faculty” often with research assistance, according to Mandl.

“There’s a mutual benefit – a symbiotic relationship,” said Mandl. “You can’t really separate that totally from the undergraduate experience because graduate students interact with undergraduate members [of the University].”

Johnson explained that the University has allocated $12.1 million to the College “in support for the restructuring plan at the end of 2012” and had earmarked an additional $11.7 million in support for the next three fiscal years.

Administrators in the College expect to reallocate funds towards other academic areas – such as establishing committees and additional classes on neuroscience, digital media and contemporary Chinese studies, Forman remarked during a presentation given to the Wheel editorial board.

“The College looks to its future, and there are some areas in which it knows it needs to invest,” Lewis commented. “You can’t imagine a liberal arts college in the 21st century that doesn’t have a collection of scholars working on China, and we have a growing number of faculty in the College working on neuroscience, and that number will continue to grow.”

According to Lewis, the College – which derives approximately 80 percent of its revenues from tuition – also expects to control its expenses by reducing the amount that it spends in certain administrative areas.