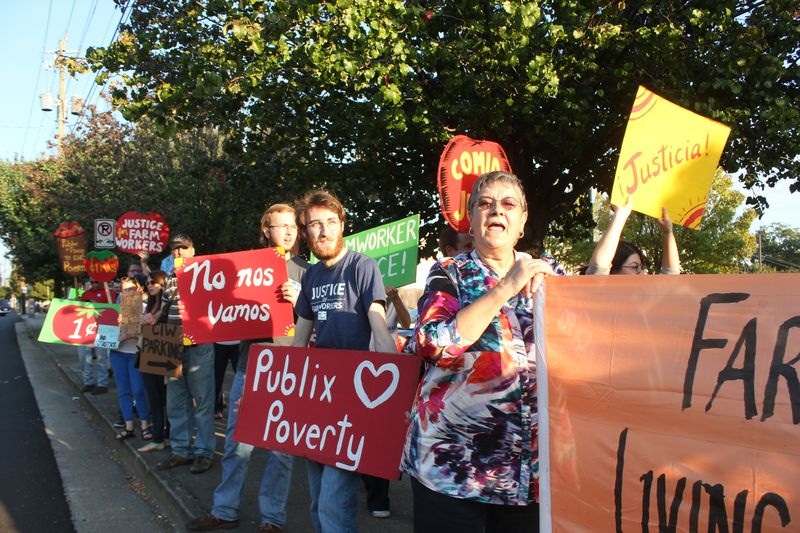 This is the message of the Coalition of Immokalee Workers (CIW), a grassroots organization working to secure human rights for farmworkers. On Tuesday, Sept. 17, CIW spoke with Emory staff and students about the Campaign for Fair Food and the peaceful demonstration, which took place this Thursday at the Ponce de Leon Publix.

The coalition primarily works to improve the pay and practices in Florida’s tomato industry. According to the Florida Tomato Committee, a federal marketing body, the state produces virtually all field-grown tomatoes in the Unites States and around half of the country’s entire fresh tomato crop between October and June.

US agriculture relies on migrant labor, and the tomato sector is no different. Latin American men and women make up much of the 80,000 to 90,000 strong workforce that keeps the industry functioning every year.

Originally from Guatemala, Santiago Perez has worked in agriculture nearly all his life. Now a part-time staff member with the CIW, he spoke to Emory students and staff in Spanish, apologizing for his inability to communicate in English.

“We don’t have much use for English in the fields, or even Spanish; generally it is best to stay silent,” he joked.

A typical working day on the farm is arduous, especially for the women who make up around 20 percent of the workforce. To meet their quotas, pickers have to fill a bucket of tomatoes, lift it on their shoulder, run to the tomato truck and pass the bucket up to the loading worker once every four minutes for 10 hours a day. Many of the Emory talk attendees who tried could not lift a demonstration bucket above their waists.

Perez explained that while he has seen the cost of living increase dramatically, the farmworkers’ wages have remained stagnant for more than 30 years.  For every 32-pound bucket of tomatoes the workers pick they are paid around 45 cents. In 1978, they were paid 40 cents.

“Now imagine that 20 years ago they would only need to fill one bucket to buy a can of coke, now they need at least three,” added Joe Parker, a Student/Farmworker Alliance member who translated for Perez.

In search of a possible solution, CIW members analyzed the Florida tomato production and distribution chain. They realized that while farmworkers were squeezed financially, the farm owners and managers were too. Every year, the big food corporations, mainly fast food and supermarket chains, use their large buying power to demand lower and lower prices.

CIW decided to focus its efforts on the big players. The Campaign for Fair Food, launched in 2001, first asked Taco Bell to sign up to the CIW Fair Food Program. Through the program, the company would pay just one cent more for every pound of tomatoes it bought and implement a human rights-based Code of Conduct on the farms that grow their tomatoes.

After four years of campaigning and major student boycotts, Taco Bell agreed to the farmworkers’ requests. The extra penny per pound went directly to the pickers, raising their piece rate by almost 42 percent.

Having gained momentum, the campaign enjoyed further success. Today, four of the largest fast food companies and three of the largest food service providers are part of the Fair Food Program. These include Subway, McDonalds, Chipotle, Bon AppÃ©tit and Emory’s food supplier, Sodexo, although the university is one of few places where Sodexo does not use Fair Food Program tomatoes. The initiative is Florida-wide and covers about 90 percent of the state’s growers.

However, half of the tomato buyers’ market belongs to supermarkets. While Whole Foods and Trader Joe’s have signed the Fair Food Program, Publix has yet to enter conversations with the coalition.

“Publix’s refusal to come to the table is astonishing given that, even if they passed the cost of the extra penny onto their consumers, most shoppers would not notice the difference,” said Parker.

To pressure the company to engage in a debate, the CIW held a peaceful protest at the Publix on Ponce de Leon at 6 p.m. on Oct. 3.

The event was attended by around 150 peaceful demonstrators, ranging in age from four month old Aliana to 84 year old Dick, and it included several Emory students.

“I am here because I am a strong believer in human rights and think it is really unjust and unfair how farm workers get paid so little,” said Emory Rollins School of Public Health student Cho Hee Shrader.

An hour into the protest, small signs of progress surfaced as the Ponce de Leon Publix local management was seen talking with CIW organizers at the front of the store.

Interested parties can join the cause by getting in touch with the Coalition of Immokalee Workers or sending a letter to a Publix Executive, which can be downloaded from the CIW website.