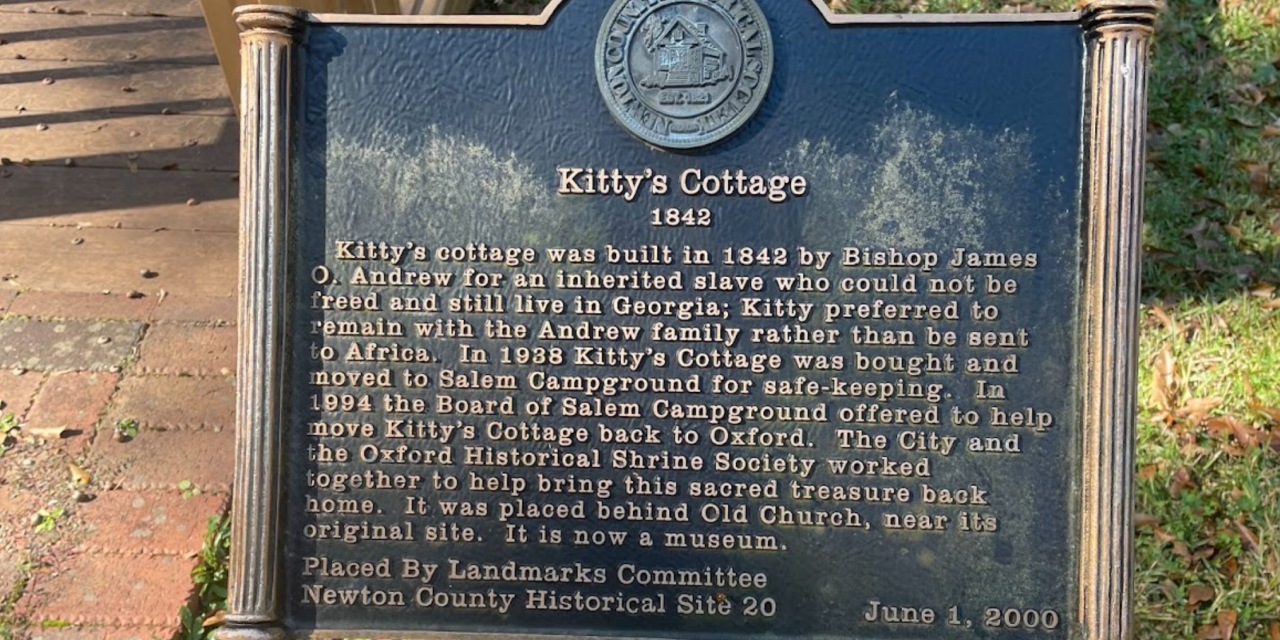 To the unsuspecting observer, Kitty’s Cottage is simply a historical landmark, a remnant of Emory University’s first chapel. However, constructed in 1841, the plain, unoccupied dwelling was the home of Catherine “Kitty” Andrew Boyd, who was enslaved by Methodist Bishop James Osgood Andrew, the first chair of the Emory Board of Trustees.

Georgia laws in the 1840s prevented an individual’s release from slavery, so Andrew offered to send Boyd to Liberia, an African colony for freed slaves. However, Boyd allegedly declined his proposition, and “preferred to remain with the Andrew family,” according to the plaque formerly erected on the side of the cottage — a notion that received criticism from the Oxford community.

Following criticism of the sign’s representation of Boyd’s enslavement, the City of Oxford Council voted on April 4 to remove it, among a number of other historical signage. The Council unanimously voted on the decision, except for councilman Jeff Wearing, who chose to abstain.

“The signage at Kitty’s Cottage seemed to tell a story that was very biased towards one side,” former Oxford Men of Color President Devin Gee (22Ox, 24C) said. “It seemed to describe how much she almost enjoyed the fact that she didn’t have her own freedom.” 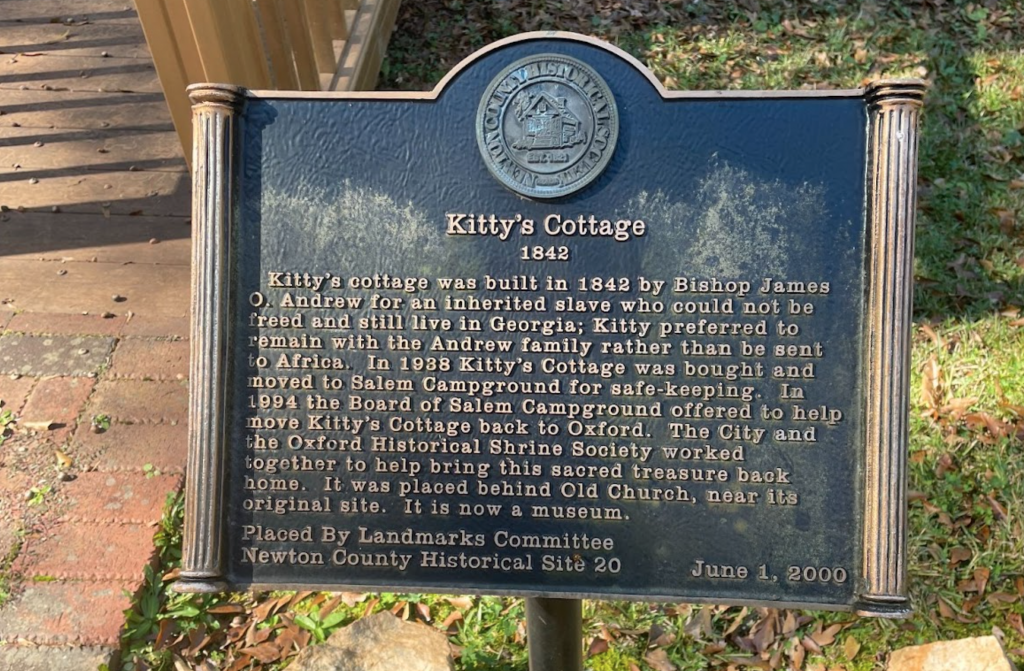 Gee added that the sign overlooked how Boyd didn’t possess the ability to “carry out her own life,” and how most Black people at the time didn’t have agency over their lives.

According to Oxford City Councilmember James Windham, the council hopes to replace the signs with “corrections, as appropriate.”

During Emory’s slavery symposium in October 2021, Gee spoke to many other Black Oxford College students. He said they agreed that the signage didn’t seem very accurate, and it appeared to have a “slant to one side of the history.”

According to outgoing Oxford Dean Douglas Hicks, the sign conveys a message that doesn’t reflect the current understanding of history — that Boyd chose to become a slave, that she was a mulatto and that she was only “technically” a slave.

“We all know that the law and society at that time did not allow her to be free,” Hicks said in a March 3 City of Oxford meeting. “She may well have been loved and a part of her community, but freedom is not a term I think we should use.”

Jordan Antwi (22Ox, 24C) said that he wishes he knew about the signage before he agreed to attend Oxford in the first place.

“On the tours, they don’t really talk about it,” Antwi added. “I feel like it’s better to be honest than try to hide it.”

He also mentioned how the signs were mentally draining, as being near the plaques made many Black students uncomfortable.

“We preach all this diversity, and we still have [the signage] there,” Antwi said. “It’s kind of like a slap in the face.”

Hicks said Williams has a powerful story to tell as a descendant of enslaved persons. She told the Wheel that “we have no idea what happened in Kitty’s Cottage,” as most of the story was recounted by slave owners, including Andrew.

“I’ve always wondered if indeed that was her house,” Williams said. “I think the sign presents a more romanticized version of what might have happened.”

Boyd — or Catherine, as the Black community calls her, according to Williams — died in 1851, which was before the Civil War. Although Andrew was a devout Christian, Williams stated that he still enslaved approximately 23 to 24 slaves who lived on his ground, which was not discussed on the original sign.

“History really is history, but people were held as property for years and were not valued except as property and were treated less than human beings,” Williams said. “We are responsible for telling a more complete version and treating people like they were men and women, boys and girls.” 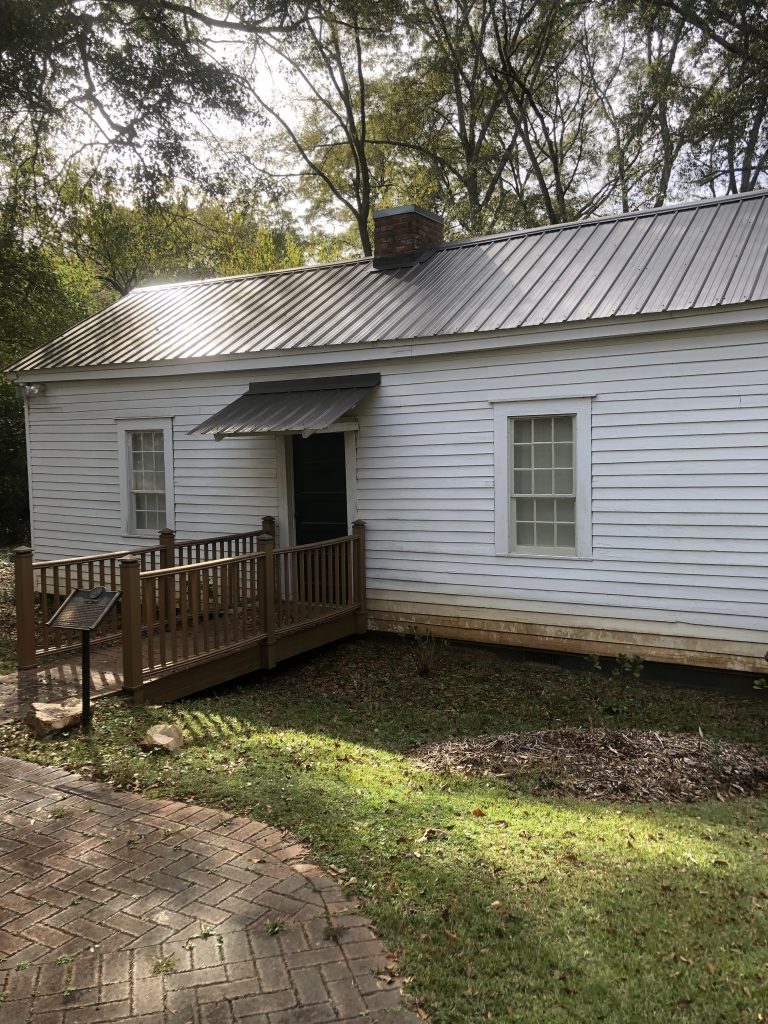 Kitty’s Cottage, which is located near the College’s campus in Oxford, Ga., is the former house of Katherine “Kitty” Andrew Boyd, who was enslaved at 12 years old by Methodist Bishop James Osgood Andrew. Andrew was the first chair of the Emory Board of Trustees. (Josh Kravath (23Ox))

The Council also removed the “Civil War Heritage Trails” sign, which relayed the history of the Old Church, once used as a hospital space for Confederate soldiers. Other removals include the granite marker at Oxford Historical Cemetery and a three-panel marker on Whatcoat Street, which also describes Andrew as a prominent Methodist who possessed “ownership of his wife’s inherited slave girl, Kitty.”

Williams said that the other removed signs pointed to ugly events that happened during the Civil War and did not tell a wholly inclusive story.

To tell the complete narrative, Williams is talking to community members who are descendants of those who may have been enslaved. In collaboration with Oxford Mayor David Eady and Emory, she hopes to tell a more complete story with the names of people who were enslaved.

“It’s time to tear down some things that remind us so much about the ugly part of our past, and build a better future and educate our young people about how we are gonna do this thing together with more justice, equity and inclusion,” Williams added.

Hicks said that he talked with Eady in hopes that the city will engage in constructive, hopeful conversations that are “not about shame and blame, but looking forward together as a community.”

Gee also said that the removal of the signage is the next step towards the future, especially with new students arriving to Oxford’s campus in the fall.

“Even though it might not be something that people in the community see issues with, I think we can bring these new ideas and better foster inclusion and integration,” Gee said. “It’s just a necessary part of living in a country as diverse as ours.” 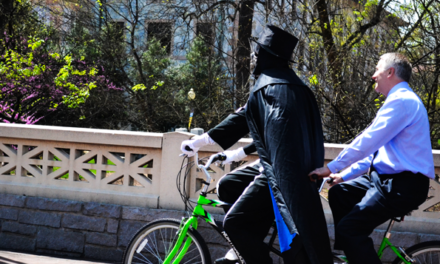