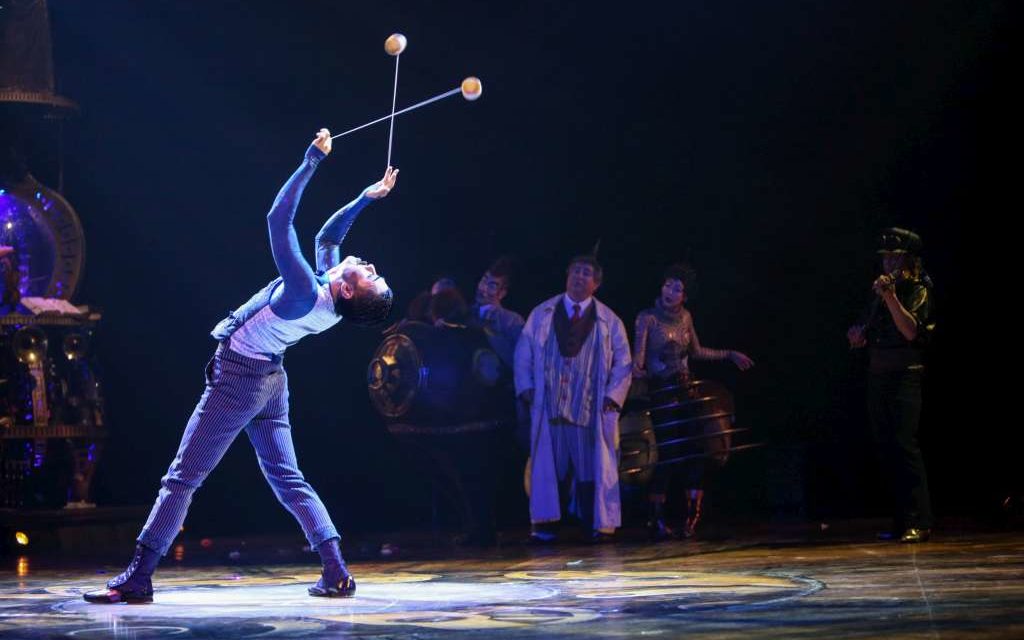 Before last Thursday, what I knew about Cirque du Soleil could fill a thimble. I knew the name of course, and I knew the group’s trainers had helped to create the Polecats in Mad Max: Fury Road, that is, the people in the final chase sequence in the film who swung around in the air on poles into the various cars to drop bombs, kidnap people and be generally awesome.

So that was enough to get me on board when I got the opportunity to go check out “Kurios,” the new show from Cirque du Soleil that’s running over at The Grand Chapiteau at Atlantic Station until May. That, and the drinks were free–and I’m not made of stone.

The show wastes no time dropping you into its quirkiness. Upon my arrival, I rushed into a truly massive tent called the Grand Chapiteau, a huge yellow and blue old-school circus tent. You’ve got to give them points for letting you know what you’re getting into right up front; it’s strangely a place of transcendence.

Outside the big top tent, you’re in Midtown Atlanta — all concrete and slightly overpriced businesses. But once you step inside the tent, you’re thrown into the wayback machine, and (outside of the Monday Night Brewing station in which I partook) you feel transported into Cirque du Soleil’s vision of what a circus might entail, and that’s before you even step inside and fully face what they’ve planned for the evening.

And what they’ve planned is a steampunk show. Steampunk, for those unfamiliar, is an aesthetic style that seeks to create an exaggerated and technologically-advanced version of the Victorian-era English world. Borrowing both the fashion (elaborate suits and dresses with corsets,top hats and goggles thrown in for good measure) and the industrial look (clockwork, rusty metal and steam power), it’s a style that gets a lot of love among the nerd set for its innovative and creative qualities.

Steampunk can also be a style that quickly becomes artificial, being the aesthetic equivalent of that girl who wore a corset all the time in high school. You never get a sense of authenticity — there’s something deliberately phony about how hard it’s trying to appear different.

On an exterior level, the set is beautiful, yes. The clockwork gear and rusted metal aesthetic gives layers to what is ultimately just a round stage with a background for the band to stand in. It’s complexity in simplicity. But that choice of aesthetic worried me.

The music gave me pause, too. That’s not to say I didn’t actually really enjoy the it. The band is immensely talented and you’ve gotta admire any group that can keep that in sync for an hour-and-a-half no matter what’s going on onstage. They played a form of electro-swing, a modern musical genre that weds the most modern pop music genres (hip-hop, EDM) to one of the most renowned pop music genres (swing). It’s enjoyable but, again, speaks to the incredibly affected aesthetic of the show.

But as the show unfolded, it quickly became clear that steampunk seemed to have been chosen less as an aesthetic for the show but more as a mission statement, its pursuit. Steampunk is about a certain degree of old-school performance, the idea that we’re returning to an older way and showing everything that makes it tick. The obsession with clockwork is about precision and it’s that quality that Cirque du Soleil seems to take into “Kurios.”

Fundamentally, this is a show about either defiers of death performing acts that make the audience clench-up really tight or people of extreme dexterity doing extremely dexterous things. It’s a parade of acts that, from the beginning, had me being the guy in the audience nervously shouting out, “OH SHIT” and then clapping enthusiastically when they actually managed to pull it off.

For example, the Russian Cradle Duo, the first major death-defying act, evoked this response from me. For those unfamiliar, this is where a large man gets up on a platform in the air and rests himself in what is functionally a large rubber band. He then holds a woman above him and proceeds to throw her so that she somersaults above him and then he catches her by either her hands or feet. This continues to escalate through the act as she completes increasingly more complex somersaults and as their platform begins to spin.

It was insane. I really hadn’t seen anything quite like it before, at least not in person. It encapsulated acrobatic skill and staging in a way that enhanced the work that went into it. And it’s through that talent that my cynicism melted away and turned into an earnest appreciation of everything that was unraveling before me on stage.

You had the Rola Bola, where a man in an aviator costume balanced on a platform placed onto a ball placed onto a tall series of tubes. That was just terrifying to watch. You had a woman doing trapeze on a bicycle flying through the air. You can’t not enjoy people willing to go that far for entertainment.

But lest I make it sound like all death-defying entertainment, the dexterity and talent on display was immensely admirable. You wouldn’t think the yo-yo act in a show like this would be much fun, but the performer made it apparent that this would be one of the show’s highlights. Moreover, in a comedy act, the MC for the evening showcased his impressive animal miming abilities.

And my favorite was the Hand Puppets, where three people and a camera told a surprisingly cute little story using their hands and some well-placed props. It was a more simplistic act than the others, but still stood as a sheer blast of creativity.

In fact, my only complaint is how numb and senseless I got after a while. The show throws so many impressive acts so fast that the initial sheer awe becomes hard to keep up as the show continues. But that’s minor.

“Kurios” is honestly just good, old-fashioned, super-earnest fun. Shockingly clever production design and a bevy of various talent make it easy for even the most hardened cynic to let apprehensions melt away and just have a great time.

Though, that could have been the drinks talking.