Chronic Disease in the Media 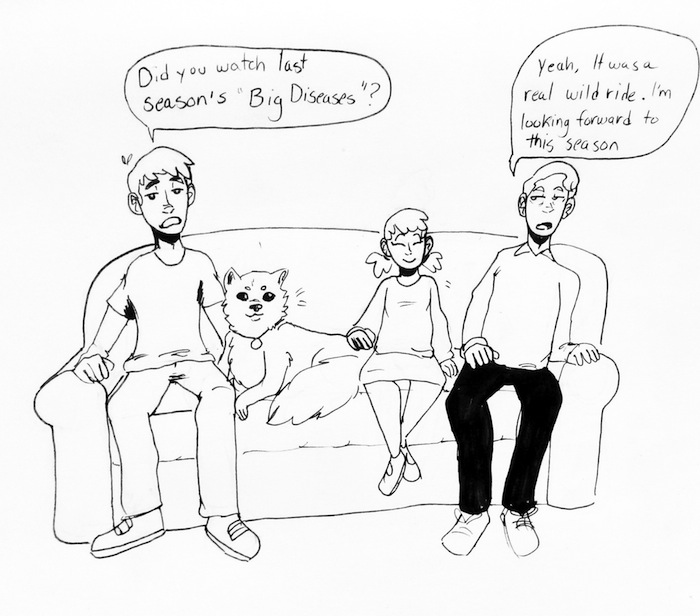 That I cannot go into the details of the symptoms of the recent flaring-up of my chronic Inflammatory Bowel Disease, heretofore in remission, and its disruption to my life is exactly why I should not be watching “Red Band Society” – or, at least, should not be enjoying it. The new Fox drama about a half-dozen plucky hospital-ridden teens is a sort of hybrid stepchild of “Grey’s Anatomy” and “Glee,” with just enough medical jargon to legitimize its premise and just enough glamour through convenient inaccuracy to fetishize it. Actress Ciara Bravo’s anorexic Emma Chota gets the slim figure without any of the outward side-effects or even so much as the telltale poor complexion. Actress Zoe Levin’s ironically bitter enlarged-heart patient Kara Souders traipses around the ward in a skimpy hospital frock as if there for no other purpose. Actors Charlie Rowe’s and Nolan Sotillo’s respective cancer patients Leo Roth and Jordi Palacios seem far more concerned with their prospects as rival suitors than as survivors. But enough about them – they are just a symptom themselves of a larger obsession with disease in our media.

Chronic day-to-day living with disease is hardly news in itself in the way that an epidemic is, but, in a world where news networks devote time to celebrity haircuts and fluff-pieces, spotlighting those with more serious ills would not be unreasonable. So, what determines news content?

If there’s one thing we can learn from the media panic about Ebola (and it’s certainly not the facts about this highly infectious but only highly specifically, fluid-borne contagious disease safely contained at ours and other fine hospitals) it is that people will watch the live feed of an ambulance driving all the way from the airport to Emory with bated breath and will chew on the details of everyone’s exact involvement, like today’s gossip. Ebola is somewhat dangerous, yes, but it is not out of concern that the media lingers on every hospital protocol and every participant’s travel plans afterward. It’s not a public service so much as a tabloid scandal, and viewers are eating it up.

Put simply, disease is sexy. Well, Inflammatory Bowel Disease isn’t. Other chronic autoimmune conditions such as asthma, psoriasis and lupus probably have a ways to go as well. But Ebola and cancer are already there. That my symptoms should remain unspeakable in polite conversation is somewhat understandable. But that Thomas Eric Duncan, the first Ebola patient diagnosed in the United States, should be a boost to the ratings all around is a sad reflection on the kind of fishbowl rubbernecking fostered by our 24-hour news cycle and its blurring the line between journalism and daytime drama. Media content would appear to support a picture of an America that really enjoys watching sick people, and not via empathy.

I’m no epidemiologist, but if I had to track the evolution of this particular strain of unhealthy obsession I would start with the 24 news cycle. There was a time when news was reported at a consistent time and venue with predictable brevity and pithy summation, but the invention of the all-hours news network and the subsequent need for filler has made everything important and therefore nothing important.

When CNN spent weeks obsessing over the Malaysia Airlines incident, I took the minority opinion of praising them for holding one topic in their attention span for that long without becoming distracted by a passing squirrel.
But now I begin to wonder if sustained gawking is really any better than the same in brief, because even long-term coverage of any one event under the microscope tends to be a singular spectacle rather than an ongoing contextual analysis. If the people want a fluffy low-content sampler they will get it, and if they want an unhealthy obsession, as this one with the unhealthy, they will get that, too.

But they never seem to want an ongoing, indefinite story like chronic disease because this has no clear exit plan and ending, and no promise of a sustainable emotional distance. Also, the average viewer without medical training cannot be expected to intervene in an outbreak or cure a terminal disease, leaving them free to go when the virus is contained or the person passes away, but chronic disease and its less immediate fights for cures appeal to a sort of social conscience and responsibility, and we can’t have that. No one wants to risk actually becoming attached or, God forbid, actually doing something. Hence not via empathy.

I believe that this climate of constantly looking in from the outside – even at supposed “reality” – is not good for us. I dare say it’s making us as sick as our new celebrities and protagonists of dubious repute. That “Red Band Society” is such a predicted success – and that its fellow fictional dramas are dropping like flies for the cheaper hair-pulling of reality television – only speaks to an increasing voyeurism without actual empathy but rather a fast-food approach where one gawks and moves on. That chronic disease and indefinite illness threaten this model only further demonstrates the shallowness of its theatrics.

– Sam Ready is a College sophomore from Atlanta, Georgia.