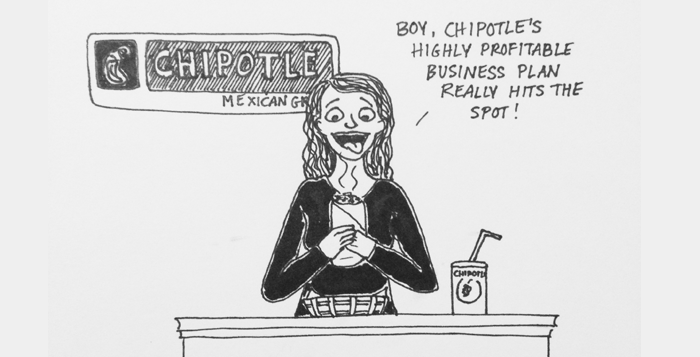 If I were to ask you for a lunch spot at Emory, what would you suggest? I might get a few recommendations for Falafel King, and if it’s Monday or Thursday the pasta at Rollins is a severely underrated option, but odds are I’d get an overwhelming chorus of “Chipotle.”

There’s a reason for it – Chipotle has flipped the entire fast-casual dining industry on its head with a product that appeals to a wide clientele, remarkable branding and an efficient business model. It offers burritos and burrito bowls made with unprocessed ingredients for approximately seven dollars, which is a winning formula in and of itself. But that misses the underlying reason for Chipotle’s popularity. Chipotle has positioned itself through its reliability and convenience to be the Starbucks of dining – you can’t ever go wrong recommending it.
When the founder of Chipotle Steve Ells opened the first franchise in the early ’90s, he calculated that he’d need to sell 107 burritos per day to be profitable. By the end of the first month, he was selling over 1,000 burritos daily.

Clearly, the company serves food that is well-received by the general population, but why am I writing this piece on Chipotle and not Moe’s, Panera or Waffle House? Chipotle doesn’t beat those aforementioned restaurants in terms of price, and rarely ever engages in the incessant promotions that its direct competitors often utilize. What Chipotle does do is win in terms of convenience, perceived quality and profit margins.

Let’s start with convenience: how easy is it for you to find a Chipotle? The number of Chipotle locations is nearly triple that of Moe’s and Qdoba, making it an easy choice for many in the city who have no other options for a burrito. Just like Starbucks Chairman and CEO of Starbucks Howard Schultz set out to place a Starbucks on every corner of New York City, Ells figured out that the competition couldn’t really make inroads into the company’s profit if they couldn’t even welcome in the same number of customers.

Simply building the most number of locations doesn’t explain the high customer retention rates Chipotle enjoys in the majority of its franchises. Like any successful company, Chipotle knows what it’s good at, and it does it very well. Chipotle offers far less options in comparison to its competitors – its newly announced addition of tofu to all locations is the first permanent menu item addition since 2005 – but the company offsets it by making their ingredients healthy and consistent.

Each consumer values individual aspects of their dining experience differently, but there is one thing that every consumer can agree on – the attractiveness of reliability. Chipotle doesn’t offer breakfast, dessert or special promotions either in regards to the menu and as a result doesn’t diminish their product in the eyes of the consumer.

If one were to ask you what your impression of Red Lobster was, you would probably base your willingness to return on the customer service provided and the quality of your order, which would probably differ from the group sitting next to you, and so on. Chipotle takes out that variability. With employees considered the best in the industry and a limited menu, your experience will most likely mirror that of the person behind you in line.

So, what’s the point? You probably already eat at Chipotle so I don’t need to tell you it’s a great place, and I’m not getting paid to advertise them, though if Emory Village’s Chipotle is reading this, I would greatly appreciate a free burrito.

What’s gone relatively unnoticed in terms of Chipotle’s rise is how it has forced other restaurants to adjust in order to survive. Chipotle is winning in a key demographic – the group that doesn’t want to shell out $15 for lunch but doesn’t feel comfortable eating off the Dollar Menu at McDonald’s – the fast-casual crowd.

As a result, restaurants such as Olive Garden, Applebee’s and other sit-down establishments are taking a hit. Darden Restaurants is looking to sell or spin off Red Lobster, and Olive Garden has had to change its logo and menu in hopes of re-branding itself as a fine Italian restaurant.

Even restaurants that are still successful have had to take notice of Chipotle’s strategy – its former parent McDonald’s, and even Taco Bell, has ramped up their dollar menu prices and breakfast menu respectively in hopes of generating more revenue. Beyond the usual suspects, however, is this revelation – restaurants have had to adapt their model in order to appeal to their usual base of customers because of Chipotle and Chipotle-inspired business models.

Chipotle has earned high profit margins and consistently beats Wall Street’s projections for the company due to a simple menu and great customer service that draws customers in again and again. Customers’ expectations have risen – if the options presented are inferior, restaurants like Chipotle are failsafe and will continue to be so. The title of this piece isn’t meant to suggest that we eat Chipotle all the time, although some people certainly try. Instead, I want to recognize that the way we view fast-casual dining has been altered permanently because of it.