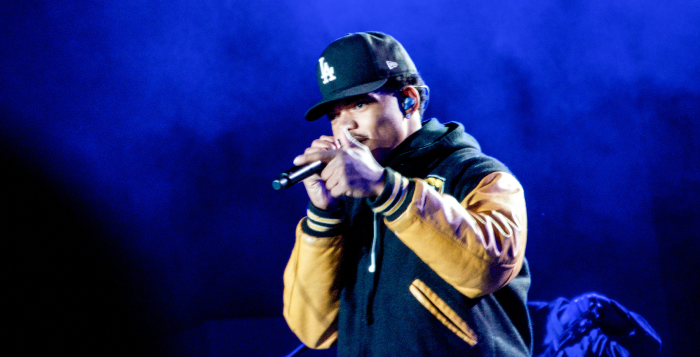 Chance The Rapper performed to a crowd of about 4,500 people Saturday night on McDonough Field as part of this year’s rescheduled Dooley’s Ball.

The opening act for the ball, Australian electronic musician Chet Faker, was unable to perform due to immigration issues having to do with his identification as he traveled from Australia, according to Atlas.

In addition, the threat of severe weather on Friday night led to the cancellation of mashup artist 5 & A Dime’s Dooley’s Ball performance. Instead, SPC combined the Dooley’s Ball name with Chance’s performance and merged the food resources of both the ball and Spring Band Party to Saturday night.

Due to the lack of an opener, SPC had music playing from the speakers as students waited near the front of the empty stage until Chance came out to perform. Some students in the crowd grew restless, shouting Chance’s name and throwing glow-sticks onto the stage.

The Chicago-native hip-hop artist came out on stage a little past 9:30 p.m, two and a half hours after doors opened, to begin his hour-long set.

Performing crowd-favorites from his mixtapes “10 Day” and “Acid Rap” and new songs from his “Social Experiment Tour,” Chance,​ whose real name is Chancelor Bennett, constantly energized the crowd with his dance moves.

Chance took breaks from his set to interact with the crowd, commenting on how Emory was by far one of his favorite shows he had ever performed.

Throughout the entire night, audience members threw glow-sticks, which SPC gave them as they entered the field, at the stage and at Chance, prompting the musician to stop the show and chastise the crowd.

At one point, Chance looked into the audience after getting hit in the face with a glow stick and said that if they didn’t stop, he would leave the stage.

“I love you guys, but if you don’t stop throwing shit, I’m just going to leave,” Chance said.

Some students enjoyed the concert but were frustrated at the behavior of the crowd.

“Chance was a great performer no doubt, but when you start throwing stuff at people when they are trying to perform, you better believe they’ll leave early,” College freshman Lehna Asongwe said. “I’m so embarrassed. He totally didn’t deserve that.”

Other students, like College sophomore Fuad Haddad, were disappointed in both the crowd and Chance’s performance.

“I was initially excited that SPC was choosing someone that was different than the usual suspects to perform, but in the end [Chance] didn’t live up to my expectations,” Haddad said.

Atlas wrote in a statement to the Wheel that despite the challenges faced and changes made, he felt Dooley’s Ball was a huge success.

“While it was unfortunate that Chet couldn’t play, I felt that Chance did an amazing job of entertaining the crowd, and it seemed like the students had a great time,” Atlas wrote. “Chance is one of the hottest rappers out there right now, and I think the students had an awesome time seeing him perform.”

College freshman Jorge Lorenzo said that the concert incredible and getting the unique chance to talk to him personally before the show was part of a Dooley’s Week experience he will never forget.

“The intimacy of this concert allowed me the opportunity to meet him and get in a pretty lengthy and meaningful conversation with him,” Lorenzo said. “The week as a whole blew away my expectations of how exciting it can really be, and now I already find myself impatiently awaiting next year’s [Dooley’s Week].”

Chance ended his set by singing “Interlude (Love Song),” looking down into the front row of attendees while asking “What’s better than Letterman, Leno, Fallon and all the above / What’s better than popping bottles trying to ball in the club?”

Chance preached to the crowd about the power of love, encouraging everyone to raise both hands and yell “I love you!” to the crowd.