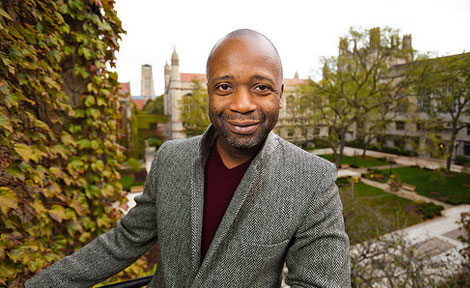 Emory students and faculty filled Emerson Concert Hall on Wednesday, Feb. 3, for the Goodrich C. White Lecture, given this year by University of Chicago Professor Theaster Gates, Jr. In the talk, which was part of Emory’s annual Founders Week celebrations, Gates spoke about racial and economic divides within society.

Gates, director of Arts and Public Life and a Visual Arts professor at U Chicago, is the founder of Rebuild Foundation, a non-profit organization that transforms abandoned buildings in run-down neighborhoods into renewed cultural sites, according to his website. In working to revive these buildings, Gates installs physical art displays, such as outdoor sculptures, that are intended to reiterate a sense of community, according to a Dec. 16 Chicago Tribune article.

In his speech, Gates discussed the relationship between societal divides and his art projects, through which he aims to revitalize the architecture and structure of run-down neighborhoods.

Gates continued by explaining “black space” in his artwork as an example of how members of society physically segregate themselves based on their racial differences.

“It’s sad that we still haven’t found ways to share space,” he said. “There’s probably more gated communities today than there have ever been. In addition to the race divide, there are probably wealthy black folk that don’t want to be around poor black folk.”

Gates said that members of society could forgo these divisions by acting as “agents of change” who “create community” as a result of seeing and understanding society’s issues. Gates strives against divides, focusing instead on instigating positive change as he rebuilds neighborhoods and creates his art through sculptures and urban planning, he said.

“On some level, I really believe that the art that I’m trying to make has to do with just the ability to see and the willingness to imagine that there are things worth seeing,” he said.

Emory Vice President and Deputy to the President Gary Hauk said that Gates was the unanimous choice of a committee made up of students, alumni and faculty with the goal of selecting an innovative and engaging guest speaker who could appeal to a broad range of people within Emory’s community.

“[Gates] brings a rich experience of urban planning and artistry in a number of different media in creative ways and is able to engage people in thinking about how they can adapt their interests and their focus of work to new times, new demands and new challenges,” Hauk said. “I think students, in particular, will be energized and inspired by his creativity.”

University President James Wagner voiced a similar sentiment when he introduced Gates at the event. “[Gates] revitalizes our collective understanding of how art and community shape each other,” Wagner said.

The event helped Emory students consider how to “enact positive changes in [their] environments,” said College freshman Leigh Schlecht, who also noted that Gates was “an incredible presence — on stage and in person.”

Gates not only professed confidence in the ability of a community to transform and revitalize itself, but also acknowledged the importance of remembering the past and past issues while moving forward into the future, a prominent theme throughout Founders Week.

The anniversary of Founders Day, which occurred on Feb. 6, celebrates the Emory College Board of Trustees’ first meeting in 1837, Hauk said. The series of events throughout the week is a carryover of a tradition that initially celebrated Emory’s charter on Jan. 25, 1915 and continued into the 1960s. Founders Week was then instituted in the 1990s when Emory undergraduate students Michael Skolnick and Robin Thomas found materials from the earlier celebrations and decided to recover the tradition.

Apart from Gates’ lecture, the week featured a “Feast of Words” that showcased books written by Emory faculty. a faculty lecture by Samuel Candler Dobbs Professor of Biology Bruce Levin, a septet that featured clarinetist Julian Bliss and “The Weeping Time,” a lecture about the identity of slaves, according to the University’s website.

Hauk said that the traditions that take place throughout Founders Week are “vital and very fun” ways to remind students of Emory’s history.

“[Founder’s Week is] an opportunity for us to remember that, as current members of the Emory community, we inherit certain aspirations and expectations about the purpose of the University,” Hauk said.