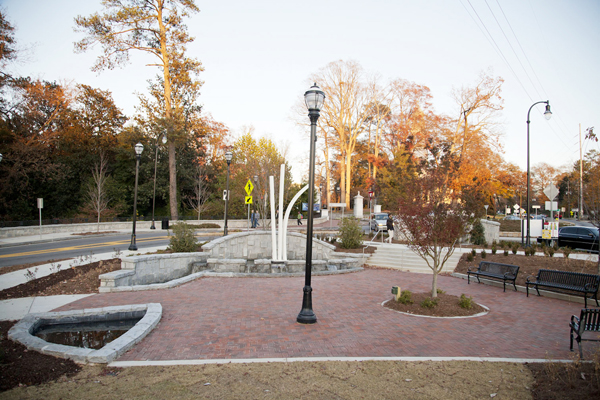 The event, titled “Memories of Candler in Word and Music” took place in Cannon Chapel and was part of a yearlong celebration named “The Candler Centennial in Story and Prophecy.”

The celebration of Candler’s 100th birthday focuses on two large events in the fall and spring, although there will be smaller-scale activities year-round.

According to Chair of the Coordinating Committee for the Centennial and R.W. Woodruff Professor of New Testament and Christian Origins Luke Johnson, the theme of “story” for the fall celebration relates to “the process of remembering the school’s history, both good and bad,” he wrote in an email to the Wheel. The spring celebration is themed “prophecy” to discuss “pressing theological issues of the coming century,” he wrote.

Dean of the Candler School of Theology Jan Love further explained the difference between the fall and spring celebrations.

“We want to spend the fall 2014 looking back and taking stock of our first 100 years – celebrating all that we’ve accomplished and analyzing where we had shortcomings,” Love said. “In the spring, we’re going to look forward to the next 100 years and say what are some of the challenges and opportunities in the next 100.”

The spring celebration will focus around a conference in March that will be on the future of theological education, according to Love.

The heart of the fall celebration began yesterday and continues through today (Friday, Oct. 24).

The celebration started Thursday morning at 11 a.m. with a worship service and premiered the centennial video, which featured interviews with notable Emory administrators and theological faculty reflect on Candler’s history and future.

The celebration continued into the night with the event “Memories of Candler in Word and Music,” which focused around the book Religion and Reason Joined: Candler at One Hundred written by Vice President and Deputy to the President Gary Hauk. The book details the history of Candler’s first 100 years and its publication is part of the centennial celebration. The reception following Thursday night’s event featured a book signing by Hauk.

Thursday night’s event was “a lot of fun and a great celebration of Candler,” said first year Masters of Divinity student Emily Bartlett.

Broderick McBride, a third year Masters in Divinity student and the Communications Coordinator of the Candler Coordinating Council (C3), said that as a student in Candler School of Theology he is “empowered to carry on the tradition of excellence and motivated to continue in the paths trailblazed by those who’ve gone before [him].”

This morning, a formal convocation will take place where representatives from the government of Georgia, the United Methodist church, the ecumenical community and representatives of Emory will be in attendance.

According to Love, 56 centennial medals will be awarded to individuals who transformed the Candler community, the church or the world in some way.

Professor Emeritus of Church and Community Luther Smith, who has taught for more than 30 years at Candler, was chosen to give the Keynote Centennial Address at the convocation.

According to Love, Smith was chosen because of his long history at Emory. She said that he, more than anyone else, has connected Candler to the city of Atlanta, the state of Georgia and the world.

At Candler, Smith is thought of as a “wise elder who knows us and all of our wonderful accomplishments and the few shortcomings that we’ve had across time, and he can speak to us with honesty and with conviction,” Love said.

Assistant Dean of Development and Alumni Relations Mathew Pinson, who served as Chair of the Fall Subcommittee, wrote in an email to the Wheel that he hopes, “people will come away from the fall celebration inspired by Candler’s history and hopeful about the school’s vision for the future.”

Emphasizing that everyone is welcome at all of the events, Love noted that each event has a different feel.

The service Friday morning is part of Candler’s normal service that occurs every Tuesday and Thursday from 11 a.m. to 12 a.m. This event is typically populated by just the Candler community, according to Love.

She said that Thursday’s event would likely have a similar feel, referring to it as a sort of family reunion – the extended family coming together to celebrate an important birthday.

Friday’s event, however, is very public, and Love’s hope is that the Emory community as well of the wider Atlanta community will join in their celebration.