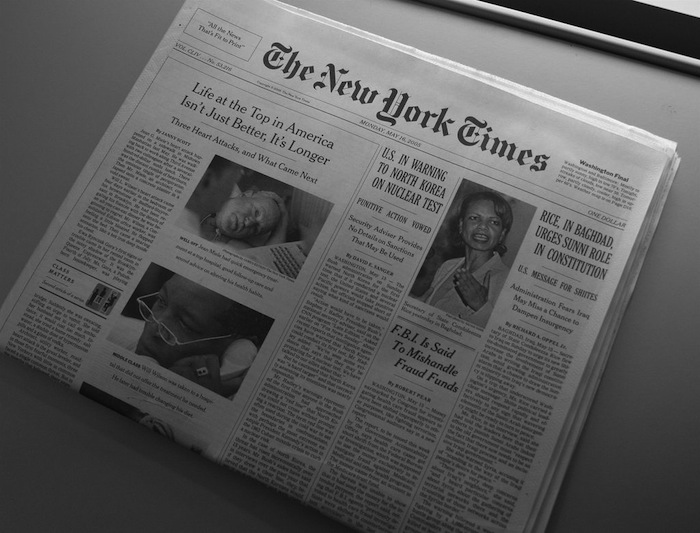 The new contract only provides the NYT to undergraduate students and reduces the number of newspaper bins around campus from five to three. There will now be newspapers in White Hall, the Dobbs University Center (DUC) and the Emory Barnes & Noble.

According to CC Vice President and College junior Alyssa Weinstein, Emory’s contract lasted two years and ran out at the end of last year. The contract cost CC $20,000. The new negotiated contract without USA Today now costs $8,500. The funding for the CRP comes from a portion of the $89 Student Activities Fee (SAF) that each undergraduate student pays as a part of tuition, according to the CC website.

“One of the benefits of our new program is that we will not be charged for papers that are not picked up, so the cost could be significantly less if readership does not reach expected levels,” Weinstein wrote in an email to the Wheel.

According to CC’s website, the CRP is reconsidered every four years through a student body referendum. Last semester, CC held an open meeting to discuss the CRP and sent out a survey to undergraduate students, but only received 40 responses, said CC Vice President of Communications and College sophomore Izzy Kornman.

“There was never any plan to completely eliminate the newspapers,” Weinstein wrote.

Weinstein also wrote that CC was involved in conversations about instituting the most cost-effective program over the summer.

“As it is, we made the decision that the roughly $11,500 would be better spent on other college-wide initiatives and clubs,” Kornman said.

The program was reinstated as the result of efforts from James M. Cox, Jr. Professor of Journalism Hank Klibanoff urging CC to reconsider funding it on behalf of his journalism students. Klibanoff required that students read the NYT and The Atlanta-Journal Constitution (AJC) for his journalism classes.

Earlier this month, Klibanoff wrote an email to CC advisor Natasha Hopkins, who works in the Office of Student Leadership and Service (OSLS), urging CC to reconsider the program.

“The [NYT] has special meaning to us at Emory,” Kilbanoff wrote in the email to Hopkins.

Hopkins responded to Klibanoff’s request, stating that the readership for the CRP was sharply declining.

College senior Nathaniel Meyersohn was one of Klibanoff’s students who spearheaded the effort to reinstate the program. He said he has been picking up a copy of the NYT most every day for the past three years.

“I think it’s anathema to students to cut accessibility to information – information about the world and current events – at a University whose duty is to inform students about what’s going on in the world,” Meyersohn said.

Klibanoff also explained the Journalism Program’s relationship with the NYT and Emory’s close relationship with its journalists and editors who have come to speak on campus. The Emory Journalism Program itself was established in 1997 through Claude Sitton, a notable former editor and reporter for the NYT, and Cox Newspapers. Additionally, Klibanoff said he is working to bring the new Executive Editor of the NYT, Dean Baquet, to campus.

“To cut the best newspaper in the world [is] taking away a key resource and a key tool that allows students to engage,” Meyersohn said. “The University has a long standing relationship with the paper, and to have the executive editor come and find out we cut [his] newspaper would be problematic.”

When CC President and College senior Adam Chan emailed Klibanoff announcing the reinstatement of the program, Chan wrote that CC had underwent a budget cut since last year.

“As College Council was undergoing a $130,000 cut from the previous year, we had to be steadfast that we would be able to continue to support this fine resource on our campus as well as the many other obligations to student organizations and programs on campus,” Chan wrote.

Chan added that CC negotiated with the NYT to establish a partnership with the best price possible, which includes online class subscriptions as well.

“Print is a much greater measure of a news organization’s distinctive decision-making about the value and importance of news than the online edition,” he wrote. “So these newspapers are vital to us, as vital as textbooks.”

Hopkins wrote to Klibanoff that CC was in the process of reevaluating its contract with USA Today as well as exploring other options, including digital subscriptions.

Meyersohn added that there are other benefits to having paper copies of newspapers on campus, especially for incoming first-years who are just discovering what areas they are interested in.

“For a while there was one copy [of the NYT] for the entire school,” referring to the Robert W. Woodruff Library’s subscription, which is housed in the Reading Room. “If you wanted to read the print edition of the NYT, the world’s best newspaper, you had one way to do it.”

Following the Sept. 30 publication of this article, Jennifer Elder, the librarian for Journalism, Psychology and Women’s, Gender, & Sexuality Studies wrote in an email to the Wheel to clarify that, “while it is true that today’s print New York Times and the past three months of New York Times print newspapers are available in the Matheson Newspaper Room, the content of current and archival New York Times articles is also accessible through our databases, microfilm collection, and The New York Times digital Academic Pass program.”

Moreover, Meyersohn said the costs students would incur from paying for a daily subscription are not fair or affordable for many students. He added, however, that he was satisfied with the end result.

“I’m really happy CC decided to keep the program, and I have no problem with some of the cutbacks,” he said.

According to Weinstein, another reason for the cutbacks was that CC was concerned that graduate students and professors were taking newspapers that were paid for by undergraduate students.

Meyersohn, however, said he didn’t have a problem with graduate students and faculty taking papers.

“The more people who read it, the better, doesn’t matter where they come from,” Meyersohn said. “If you’re going to an elite, research institution like Emory, it’s your right to be able to read the newspaper.”

The new CRP also integrates a digital platform, with 100 free spots per day for full digital access to the NYT, Weinstein said.

Both Weinstein and Kornman said CC would be reevaluating readership at the end of the year to see if there is room for improvements next year.

Correction 10/3 12:02 p.m.: The original article was updated with a clarification from the Librarian for Journalism, Psychology and Women’s, Gender, & Sexuality Studies Jennifer Elder in response to a quote made in the article.