Carter: Give Trump Some Credit for DACA Decision 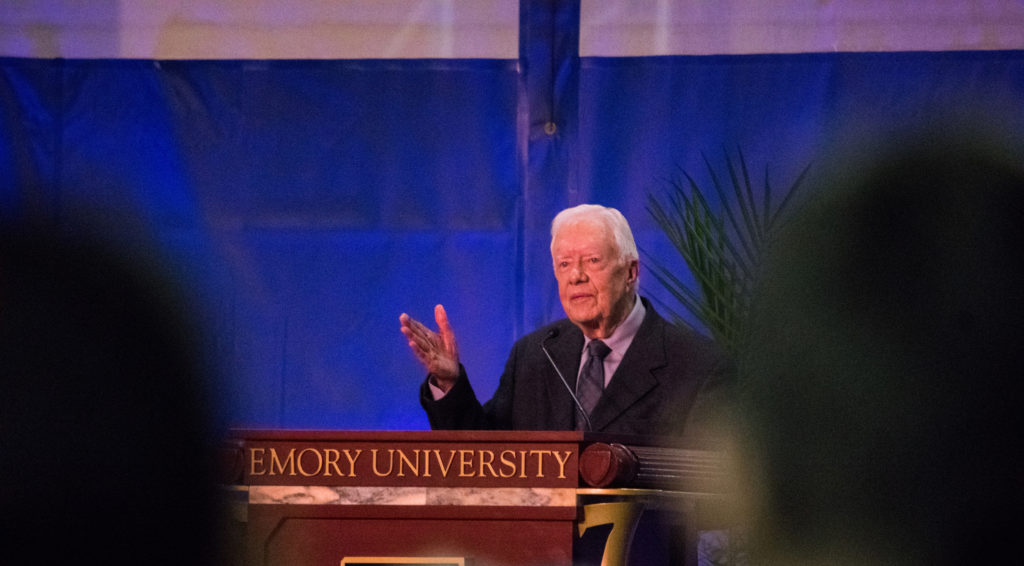 Former President and Emory University Distinguished Professor Jimmy Carter isn’t shy about criticizing the Trump administration, but on Wednesday Carter said that “we have to give [President Donald J. Trump] credit” for his approach to immigration law.

Speaking to an animated crowd in the WoodPEC, Carter, 92, praised Trump for his controversial rollback of the Deferred Action for Childhood Arrivals (DACA) program and giving Congress six months to pass a DACA replacement, “which is long overdue.”

The former U.S. president’s remarks came during the 36th annual Carter Town Hall, during which Carter discussed the state of national politics, health care and his personal life to about 1,400 Emory freshmen and other community members. Carter answered questions submitted by audience members in writing and via Twitter and Facebook.

Carter noted that Trump has “not ended DACA yet,” and reminded the audience that even former President Barack Obama had failed to pass comprehensive immigration reform through a Congress under Democratic control. A longtime Democrat, Carter also said that members of his party have been too hesitant to pass legislation on border control.

Hours after the town hall concluded, Democratic leaders Rep. Nancy Pelosi (D-Calif.) and Sen. Chuck Schumer (D-N.Y.) wrote in a joint statement that they and Trump had reached an agreement on legislation to protect young undocumented immigrants from deportation.

Carter also spoke about health care, calling a single-payer health care system “the best system” in theory, recalling that he had proposed a “Medicare-for-all” measure as president. He praised the Canadian system, recalling that after he had collapsed working on a Habitat for Humanity build, he had paid $0 for his hospital treatment in Canada.

A proposal that would expand Medicare coverage to all Americans was recently introduced by Sen. Bernie Sanders (I-Vt.), whom Carter voted for in the 2016 Georgia Democratic primary. Sanders’ measure has been gaining Democratic support in Congress.

Carter also criticized the composition of the government, which he said has come to represent a small portion of people, asserting that the United States has become dominated by the political elite.

“It’s become primarily an oligarchy now, for the wealthiest people, and the most powerful people prevail,” Carter said.

The former president also rebuked gerrymandering of electoral districts, which he said has led to growing party polarization within the U.S.

“[Gerrymandering] distorts an America which used to be one of our finest democracies on Earth,” Carter said.

But despite the divisive nature of the current political climate, Carter remains optimistic about the future of politics because he believes the American populace will ultimately rectify political setbacks.

Jamie Harrell (16B), who identified herself as the first open transgender MBA Goizueta Business School graduate, asked Carter how he envisioned the path forward for equality of LGBT students.

Carter replied that LGBT students are at “the top of his list of concerns, because they are being mistreated in many areas.”

“I would like to see the United States, once again, become the foremost champion of human rights,” Carter replied. “That means treating everyone — as the Bible teaches — all equal under the eyes of God.”

Starting the Q&A on a lighter note, a 10-year-old distant cousin of Carter asked him how many peanuts he grew on his farm. The former president smiled, and then reminisced about his childhood memories of selling peanuts at six years old, making about a dollar a day.

“Now, we make about 400 to 500 tons of peanuts on our farm each year. All that you’ll eat for the rest of your life,” Carter quipped.

When asked about advice for college students interested in activism, Carter said that college students are at the freest stage in their lives and encouraged them to probe within their hearts and minds about what truly moves them.

“You are at a privileged status in life, being a student at Emory,” Carter said. “Take advantage of it. Don’t ever underestimate yourself.”

Aadya Bhaskaran (19Ox, 21C) said that Carter’s advice about the unique position she has as a student at Emory resonated with her.

“I think what I took away most was how we should make the best out of this opportunity and to never doubt ourselves because if we believe in ourselves we are capable of really great things,” Bhaskaran said.

Victor Sorescu (21C) said he did not agree with Carter on some topics, such as his comments about Trump’s DACA decision.