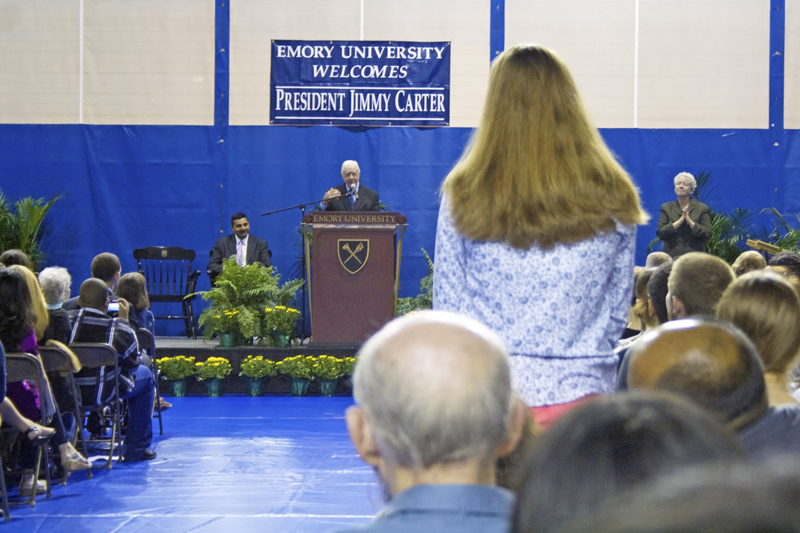 As per tradition, Carter took questions from incoming students via paper submissions and Twitter, addressing the students town-hall style in the Woodruff P.E. Center. Questions focused on various topics from international issues, such as the Edward Snowden leaks, to more lighthearted subjects, such as Carter’s soft spot for overalls and singer-songwriter Willie Nelson, his favorite musician.

When a student asked Carter about his opinion on the situation in Syria, Carter cited his recent editorial in The Washington Post. He said he disagreed with President Barack Obama’s decision to use military force in Syria and that he hopes Congress would vote against the strike.

At both the town hall meeting and in the editorial, Carter proposed a peaceful resolution that involves accepting Russia’s proposal to place Syria’s chemical weapons under the United Nations’ control. He said that using military force in Syria would probably result in forceful retaliation.

“In my opinion, the only option that’s reasonable is for us to pursue the idea of no more military action by the United States,” Carter said.

One student asked Carter to identify his most fulfilling moment in his humanitarian work. Carter said that he had not experienced such a feeling yet and that this would come when the Carter Center achieved its goal of guinea worm eradication.

Carter was also asked who his favorite U.S. president was. Carter answered that it was Harry Truman. He spoke admirably about Truman’s honesty and what he called Truman’s “courageous decisions.” In particular, Carter said he was inspired by Truman’s order to desegregate the U.S. military forces at a time when established segregation made this decision unpopular with many across the nation.

When the Soviets refused to withdraw from Afghanistan, Carter met with approximately 150 U.S. athletes and coaches in March 1980 to explain that the U.S. would be boycotting the Olympics that year. Carter replied that while the decision was extremely difficult, he believed it would send an important message to the Soviet Union and to the international community.

College freshman Luis Blanco said he was glad Carter discussed the 1980 Olympics boycott and the Snowden leaks. However, he expressed some disappointment with many of the questions.

“A lot of them were just too broad for him to answer,” Blanco said.

While Carter did speak about the Iran Hostage Crisis briefly, College freshman Sean Perryman proposed a more specific question that he would have like to have had answered.

“One of my friends was going to ask about the movie ‘Argo’ and its portrayal of the [Iran] Hostage Crisis,” Perryman said. “It would have been nice to hear about that.”

Some of the less serious questions made the event more enjoyable for College freshman Sarah Hesse because it made Carter seem more personable, she said.

“It was cool to realize that he’s a really sweet old man,” she said. “He’s really adorable.”

True to his nickname “The Peanut President,” Carter reasserted his love for crunchy peanut butter and took the opportunity to plug the Plains Peanut Festival, which begins Sept. 28. in Plains, Ga.

Carter also described some of the ongoing work of the Carter Center, the nonprofit organization he co-founded with his wife, former First Lady Rosalynn Carter. In partnership with Emory, the Carter Center conducts work in human rights through a number of peace and health programs.