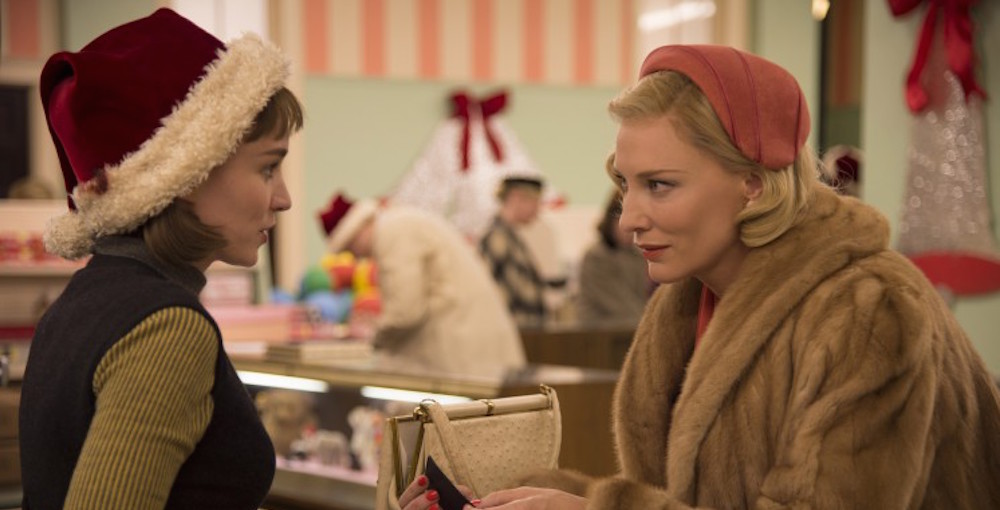 An early scene quickly sets the stage for what Carol will be. Therese (Rooney Mara), a young shopgirl working at a department store in 1950s New York, spies a beautiful and elegant woman, the eponymous Carol (Cate Blanchett), from across the store. For a brief moment, the camera becomes our gaze and we see what Therese sees. There’s something stunning and hypnotic about the sight that gaze gives us, though it does not announce itself. There is not a swell on the strings, an obvious separation, but a meaningful look, and a look that says the whole world. It’s a look of love.

Carol is a story that teeters on the edge of not working, a passionate and beautiful love story of two women in a time when they could not express it, a story that could so quickly become cold, distant and resigned. It’s a love story that exists entirely in glances and looks and furtive hopes that leads to a short period of externalized affection, at least as we see it.

Carol, an adaptation of Patricia Highsmith’s 1952 novel The Price of Salt, is a film that feels utterly and totally delicate on its surface. Partially, that is owed to the romance of looks and glances; it’s a film that must dance on the edge because it is about an era in which Carol and Therese’s love must exist on the edges, away from the eyes of the public.

And partially, that is owed to the period setting. Period settings tend to create a fragility and distance to the way we observe and absorb stories because they become time capsules and are not something we connect with right away. Every ounce of Carol drips with period detail, thanks to the work of production designer Judy Becker. Immaculate costuming and lush sets take us to an era that is long gone.

What is done with these sets is what turns Carol from a simple love story that takes place in some nice clothes and houses into the work of love that it is. Cinematographer Edward Lachman gives that world an immaculate and inviting sheen, creating something warm that finds the look that is so important in this film. We get the chance to watch the subtle tics and expressions, watching that slightest change that conveys the emotions our leads are trying so desperately to repress. Lachman’s work helps Carol become a story of dams bursting, of people trying to constantly hold back the floods they feel coming over them.

And it is director Todd Haynes’ work that brings it all together. Haynes is a master filmmaker, a teller of tales about the outsider in all their forms with a control of effusive emotion told exclusively through the film and its images. Haynes shows his continued mastery of creating stories (starting from films like Far From Heaven or I’m Not There) where the passions and emotions that are unspoken tell as much as the ones expressed. His work makes these furtive glances and asides mean so much. It’s his least stylized film, at least structurally, but it’s one where his style means the most.

But what holds this film together more than anything else are the performances of our two leads (neither of them merely supporting, despite what The Weinstein Company will hope to tell you): Cate Blanchett and Rooney Mara.

Blanchett continues to earn her reputation as perhaps one of our best working actresses’ as the icy and frankly difficult Carol. She is a character of constant mystery, and in the hands of a lesser actress, it would likely make Carol feel without character. She constantly dances the line between lover and predator; it becomes near impossible to know what she wants or what she’s thinking at any moment. It makes her fascinating, but someone that is hard to follow for the duration of the film.

Mara’s Therese is every bit of warmth and enthusiasm that Blanchett’s is not. Where Carol obscures, Therese is there to let us in, to feel her conflict and worry. There’s something so passionate in her confusion, in feeling it swirl together in a mixture of pleasure and pain. Mara turns in a phenomenal performance, the kind of performance that makes this film.

Special kudos to Kyle Chandler also, playing Harge, Carol’s ex-husband. The role would have been so easy to play as a monster, a walking example of society-at-large. But playing him as a man who has seen his world fall down all around him gives the film a lot more nuance, a more compelling film than the simple PSA this film could have been.

And to be fair, this film does hit that simple PSA strain every so often. It seems to go towards “social problem” film when it is more than enough for it to be a compelling romance. When Highsmith crafted the original story, she wanted to make a story of lesbian romance that was radical in allowing some kind of happiness for its characters in the end. For Carol, that should have been enough. But these moments are very few and far between and honestly do add a sense of desperation to the romance that helps shift the footing between our lovers and keep their romance interesting.

That romance is what’s beautiful about Carol. It’s an immaculate piece of craft featuring a love story, but one that feels so unlike the love stories we so often see. How willing you are to get past the icy and fragile exterior is likely how much you’re going to get into and love this film.

For those who push past it, you find Carol, a film about love and what it is, in all of its confusion and all of its glory.