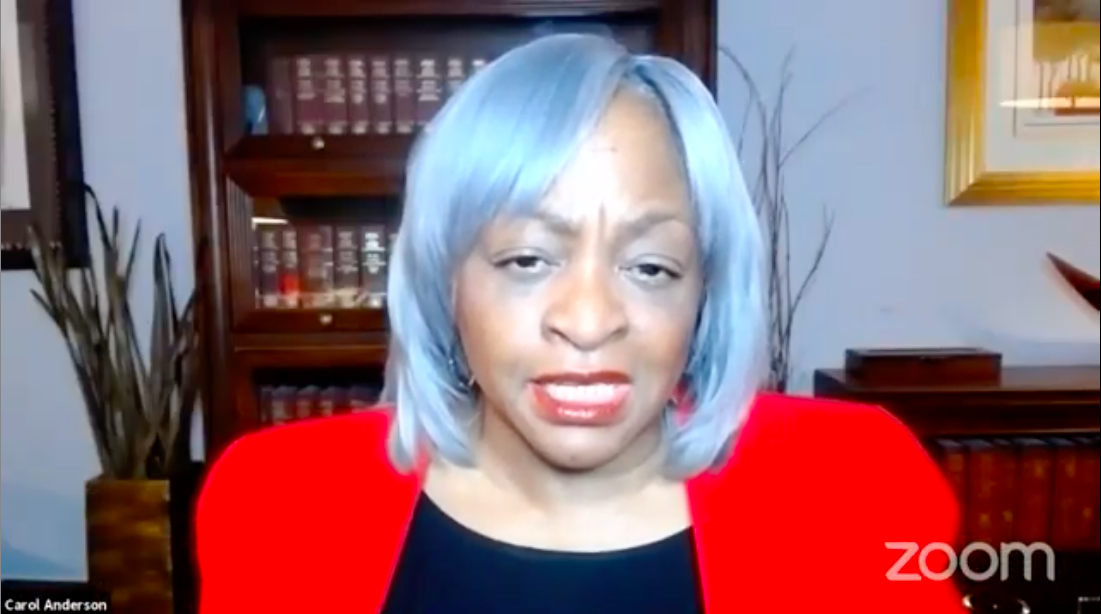 Charles Howard Candler Professor of African American Studies Carol Anderson explained how white rage contributed to the Jan. 6 insurrection at the U.S. Capitol at a panel hosted by the African American Policy Forum (AAPF), a think tank with the purpose of connecting academics, policy makers and activists to confront inequality.

The virtual event on Jan. 13 was part of AAPF’s 21st episode of the series “Under the Blacklight,” which aimed to address how white supremacist motivations instructed the Capitol riot.

AAPF Co-founder and Executive Director Kimberlé Crenshaw, a legal scholar known for coining the term “intersectionality” in 1989, moderated the event. Crenshaw said she felt compelled to host the talk to address the tension of Jan. 6 and the implications it has for the country.

“At one moment we were celebrating the historic electoral wins in Georgia, and at the same time we were bracing for the existential threat to democracy that was coming from the Capitol,” Crenshaw said.

“White rage” is the idea that racist structures have created white bitterness toward Black people. Anderson created the term in a 2014 op-ed in response to the killing of Michael Brown, and she advanced the concept in her New York Times Bestseller book, “White Rage: The Unspoken Truth of Our Racial Divide.”

While the attack on the Capitol demonstrated “white rage,” she said the phenomenon applies to more insidious infringements on Black individuals’ rights.

“We often think about white rage as the kind of violence that we see, but white rage when I’m talking about it are the policies that are put in place to undermine, undercut Black advancement toward their citizenship rights,” Anderson said. “This is why we have Black codes after the Civil War. This is why we have massive resistance after Brown, the war on drugs after the Civil Rights Movement, Donald Trump after Barack Obama.”

Anderson said that rage felt by white supremacists is rooted in the lie that Black people are not citizens and do not have rights that white men are “bound to respect.”

“When you see the kind mobilization and organizing that is happening in the Black community to gain hold of their rights, it is enraging,” Anderson said. “That rage then comes up in terms of these policies … they then also sanction, approve the violence that reigns down on Black people.”

Anoa Changa, a freelance reporter covering reproductive justice, and Joe Lowndes, a professor of political science at the University of Oregon, were also panelists. Changa criticized Democrats for praising Republican politicians such as Georgia Secretary of State Brad Raffensperger for standing up against President Donald Trump’s false election fraud claims.

“The depiction of Brad Raffensperger as if he’s the people’s champion …  is rather laughable for those of us here in the state of Georgia who have watched Brad Raffensperger over this cycle alone actively engage in behaviors that undermine the election process,” Changa said.

She cited Raffensperger’s decision to side with voter fraud group True The Vote in attempting to reject the ballots of Georgia voters who filed a change of address form without any indication they had permanently moved.

Yale University Sterling Professor of American History David Blight presented a brief history of white supremacist insurrections in the U.S. and the ways in which media outlets failed to appropriately cover those events.

“[These panelists] deeply believe in the role of science of evidence of facts of truth when we can find it,” Blight said. “But what we’ve learned is that there are millions and millions of people who have beliefs, and it doesn’t matter what truths are.”

Anderson attributed the success of the attack to what she calls the “addictive power of white supremacy” — the idea that people of color aren’t seen as American citizens and therefore their votes are “illegitimate.”

This entitlement to power is what Lowndes believes caused rioters to attack Capitol Police, resulting in the death of two officers.

“There’s something about white supremacy that is at the heart of what policing is anyway,” Lowndes said. “But it’s also interesting to see the way in which people in the Capitol takeover treated the police, yelling at them, ‘You work for us, you work for us,’ which is not a way that other people would ever approach the police. They were willing to attack the police when they saw them not protecting their white interests.”

Anderson recounted a time in Minneapolis when a member of the Boogaloo Bois, a loosely organized far-right extremist group, shot at a police station.

With the recent call from the President-elect Joe Biden for unity, Blight cautioned that reunion and appeasement without accountability is not the appropriate response to the Jan. 6 attack.

“You cannot have healing without justice,” Blight said. “You have to have both. The great tragedy of Civil War memory … was that healing and justice never came in balance. The healing of the country, the reunion as you like, came at the great cost … of Black civil and political rights.”

Crenshaw directed her last question of the night to Anderson, asking whether it is possible to avoid repeating history when failing to successfully counter white supremacy. Anderson said she believes the solution lies in breaking the “zero-sum game,” where one group’s wins must be directly countered by another group’s loss.