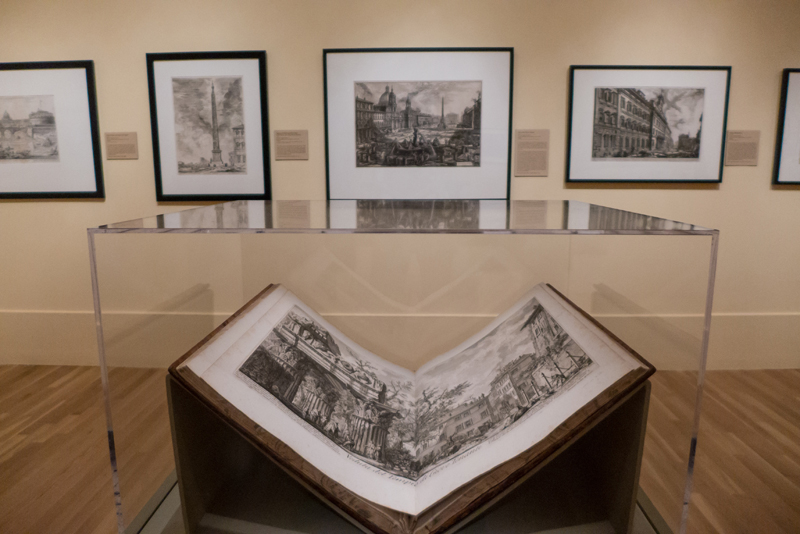 Emory’s Michael C. Carlos Museum unveiled a new exhibit focusing on the city of Rome, which will run from Aug. 24 to Nov. 17.

The exhibition, titled “AntichitÃ  Teatro Magnificenza,” explores “how the city of Rome was perceived and mapped in three distinctly different centuries,” and presents Rome as an “incredible and constantly changing city through compelling works of art,” said Bonnie Speed, the director of the Carlos Museum. The exhibit consists of three sections, representing Rome across the 16th, 17th and 18th centuries.

Each room is painted a different color so as to help visitors distinguish which era they are in, according to Cecily Boles, intern to co-curator Sara McPhee and 4th year graduate student at Emory.

The exhibit was brought to Emory mainly by co-curators Sara McPhee and Margaret Shufeldt, according to the museum’s website. McPhee and Eric Varner, an associate professor in the Art History department, are currently teaching a class titled “Views of Rome: Ancient and Baroque” that was “designed in conjunction with the exhibition,” according to Varner.

College sophomore Amina Khan, a student in the class, said the exhibit is “fascinating because it is the first time all of these important articles of Rome are coming together, and therefore allow us to examine them in reference to one another.” Furthermore, Khan said that she is excited to be in the class because of how much time they are encouraged to spend in the actual exhibit both in and outside of the classroom.

The 16th-century room, antichitÃ , consists of two large maps of Rome and smaller etchings of monuments. The name represents the Antiquarian scholars of the time, who sought to reconstruct Rome intellectually, which is why most of the drawings are representative of real Rome and based off of coin faces, accordinqwg to the AntichitÃ  section of the exhibit’s catalog, written by Varner.

Furthering the theme of precision, the teatro section represents Rome in the 17th century and is based mainly off of artist Giovanni Battista Falda who, in 1676, published a bird’s-eye view of Rome with almost exact dimensions and details, accurate down to the number of windows on buildings, according to Boles.

The map itself and details may be found in the Teatro section of the exhibit catalog, written by McPhee.

According to Boles, the city comes to life in the 17th century room through gaming technology. Visitors will be able to use computers located in the 17th-century room to virtually walk the streets of Rome on a grid based mainly off of Falda’s map.

The final section of the exhibit is titled Magnificenza and is discussed in the catalog by Emory art professor Jason Ciejka.

He writes that this section moves away from accuracy and, following its title, represents a fantastical view of Rome. The map that inspired this room, the Pianta Grande, is comprised of 12 pieces and is meant to convey the beauty of Rome in the 18th century.

According to Cienka’s section in the exhibit catalog, although most of the drawings are of literal places, they are decorated to shed a “positive” light on Rome at this time.