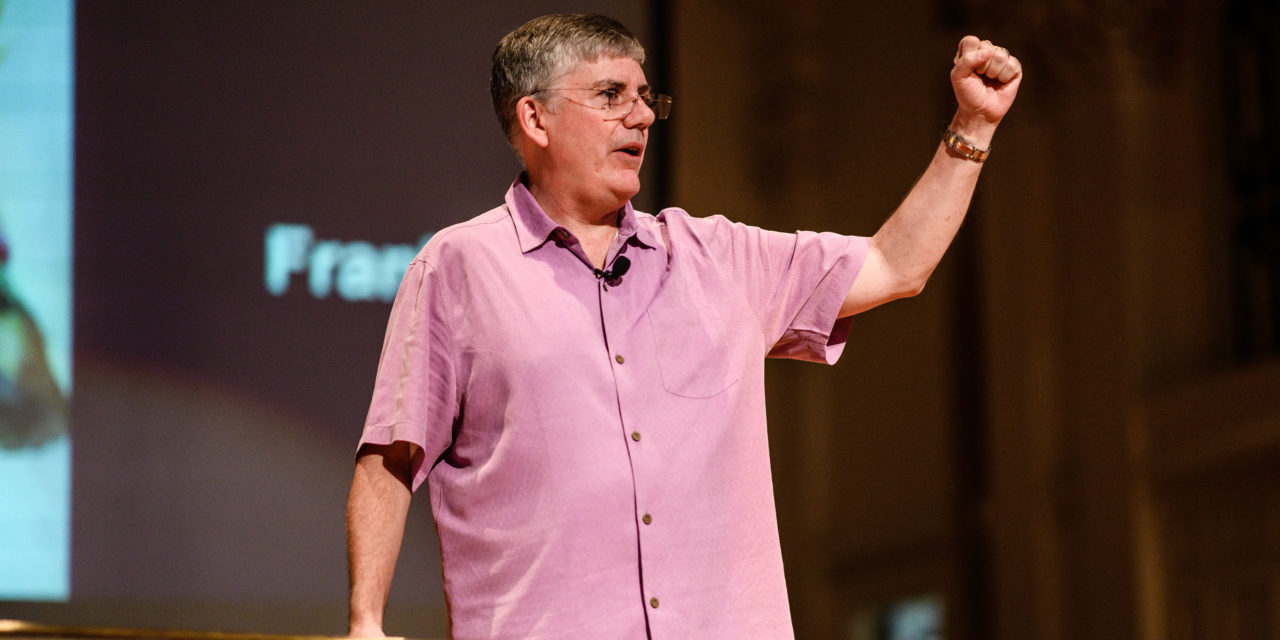 A young boy sat reading Rick Riordan’s latest book, “The Tyrant’s Tomb” from Riordan’s “The Trials of Apollo” series, on a ledge behind the Greek-style columns at the Glenn Memorial United Methodist Church as he waited for the doors to open. A long line had already formed over an hour before the celebrated author took the stage on Sept. 24.

Children and their parents, many harkening back to Riordan’s first series, “Percy Jackson and the Olympians,” by wearing orange “Camp Half-Blood” shirts, filed into the church, interspersed with a few college-age students. A full house of excited children and adults alike flipped through their signed copies of Riordan’s latest book, and some took turns taking pictures in front of the book banner that was placed at the front of the room.

Alumna and volunteer usher for the event Hannah Middlebrook (19B) said she was pleased with the success and variety of the audience.

“What stood out to me most was the diverse audience that Riordan’s books reached,” Middlebrook said. “The event was attended by adults, college students and grade school students from different backgrounds, but all of whom were equally excited about the books and the author regardless of their age.”

The event started with a few words from Justin Colussy-Estes, the store manager of Little Shop of Stories, an independent bookstore in Decatur that has brought Riordan to Atlanta for the past four years in conjunction with the Carlos Museum. What followed was not Riordan himself, but a video of kids explaining what it means to be a demigod, titled “#DemigodGoals.”

Following the video was a skit of one of the scenes from Riordan’s latest book series, performed live by Riordan’s editor Stephanie Lurie and publicist Seale Ballenger, the latter of whom carried a Nerf bow and arrow. As Riordan later commented, they spared no expense on costumes. Although the mic was cutting out quite a bit during the skit, and the two were clearly not actors, the audience still seemed to have a great time — albeit impatient for Riordan to appear. 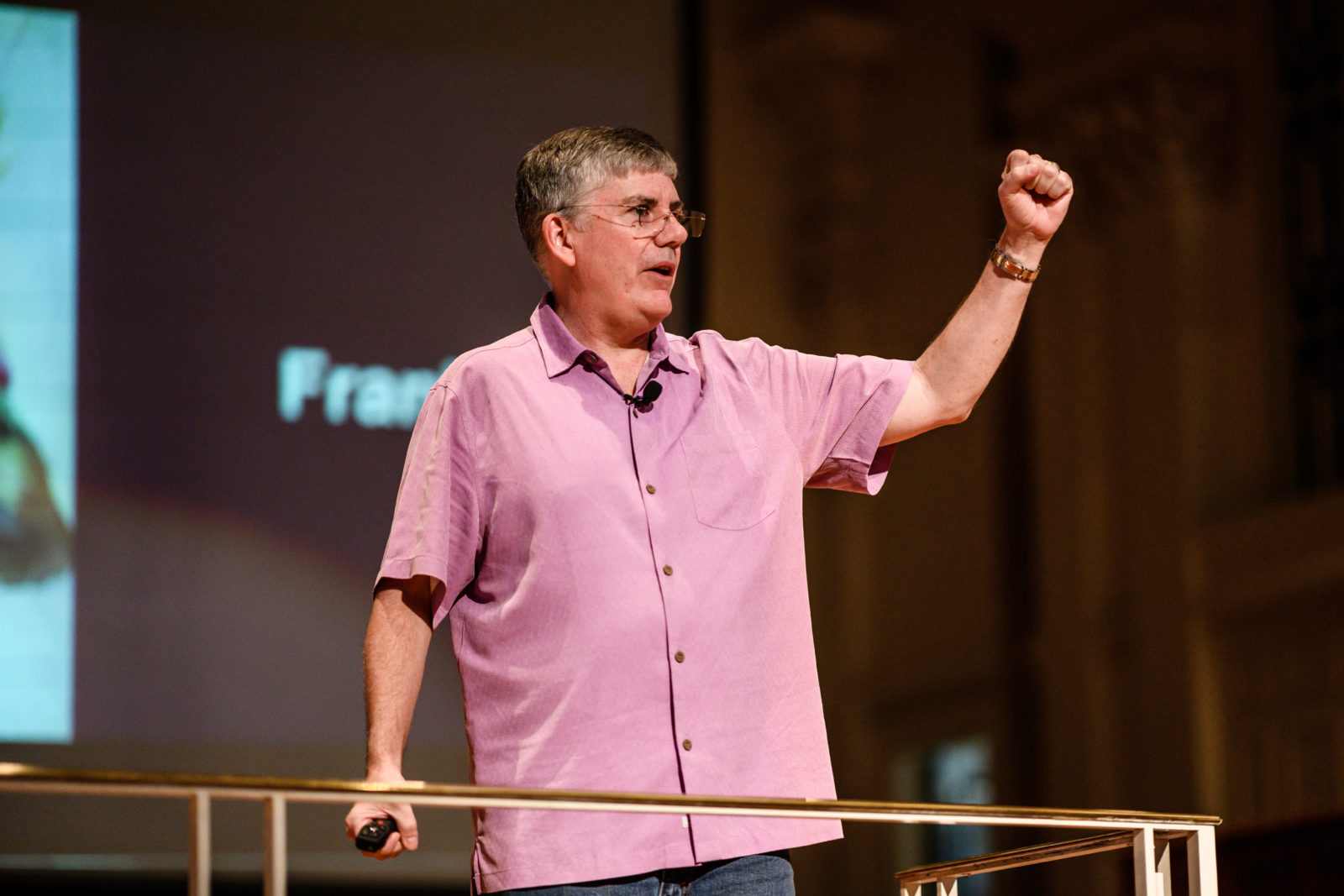 When Riordan finally came on stage, he began by introducing the “Tour of Doom,” his book tour for “The Tyrant’s Tomb.”

Riordan’s humor was met with laughter from the crowd because, as he accidentally revealed later on in the event, a major character was killed in the series’ previous book, “The Burning Maze.” The spoiler was met with a slight grumble from the audience.

“I’ve read all of [Riordan’s books], but I haven’t read ‘Trials of Apollo,’ … [and] I didn’t know know he killed [that character],” said another volunteer usher for the event, Claudia Konings (22C).

Riordan then presented character art for his new book to introduce new characters and hints at the return of some that appeared in the books prior to his “The Trials of Apollo” series. The art came from many sources, such as from John Rocco — who has illustrated all of the covers of Riordan’s books since “The Lightning Thief” — and Viria, a fan artist that Riordan hired to do the character artwork for his website.

“It’s not easy being Apollo,” reads the description of “The Tyrant’s Tomb” on Riordan’s website. “Especially when you’ve been turned into a human and banished from Olympus.”

According to Riordan, Apollo (now banished from Olympus and stuck in the 16-year-old body of Lestor Papadopoulos) will be joining his friends to fight against the evil Roman emperors — and according to his presentation, it will involve “doom,” “more doom,” “still more doom” and “EVEN MORE DOOM!” Oh, and there will be zombies.

After his presentation, Riordan talked about the “Rick Riordan Presents” series, “a publishing imprint that features books that explore mythology similarly to the way Riordan’s books do,” according to Alice Hutton, a representative from the Little Shop of Stories. Riordan explained that there are certain mythologies that he did not grow up with, and he felt it wouldn’t make sense to write about them.

Riordan went through a few upcoming books of the imprint series as well as some that had already been published, including the “Aru Shah” series by local author and Emory alumna Roshani Chokshi (13C), who briefly came on stage to discuss her Hindu mythology-based books.

According to Middlebrook, who interned at the Carlos Museum after graduating from Emory last spring, the museum put together a guide to the classical galleries through the lens of Apollo from Riordan’s books.

“I think it’s great that Riordan came to Emory because we have the Carlos Museum on campus, so people who read Riordan’s books and become passionate about Greek and Roman mythology have a place to learn even more by seeing ancient objects firsthand,” Middlebrook said.

Riordan ended the event with a short question and answer session, answering questions chosen by Ballenger that the audience had submitted on flash cards.

“Are there any characters that you killed off that you changed your mind about?” the flash card read. To which he replied, “Gee, why would you be asking that?”

Someone then asked which character he would like to be his best friend.

“I would hope that Annabeth [from the Percy Jackson series] would be my best friend,” Riordan said.

The audience cheered in response. Riordan said he chose Annabeth because of her intelligence and because her and Percy’s relationship is based on his own relationship with his wife, Becky, who’s been with him since they were 16 years old.

One question in particular stood out as being directed to Emory students as well as young writers. Before Riordan left the podium, the audience member asked him what he thought Emory creative writing majors, as well as other writers in the audience, needed to hear. Riordan emphasized the importance of reading and writing.

“Read a lot,” Riordan said. “Everything you need to be a writer you learn from reading. … Write a lot. … You can’t learn [how to write] by talking about it. …  And don’t give up. … My first novel was rejected 13 times. Fourteenth time, somebody said yes. But if I’d … given up at five or 10? I would not be here talking to you.”