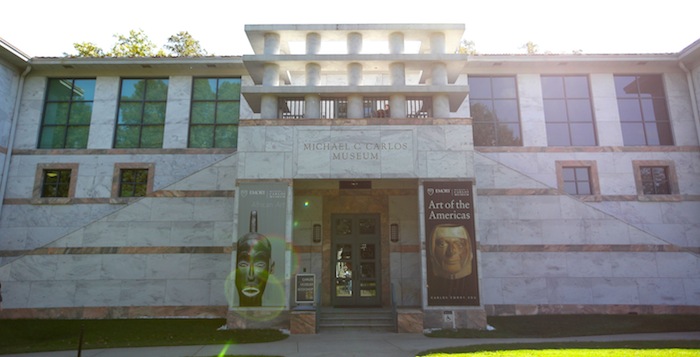 Emory’s Michael C. Carlos Museum unveiled its latest visiting exhibition, African Cosmos: Stellar Arts, on Jan. 31. The exhibit, which is from the National Museum of African Art at the Smithsonian, focuses thematically on representations of the heavens by African artists and artisans, with the bulk of the material representing the crafting traditions of the 19th and 20th centuries and supplementary objects from the Carlos’ Nubian and Egyptian collection to provide a deeper historical frame of reference for the exhibition

On its opening day, the museum was filled to the brim with a diverse mix of visitors. Young families brought their children, college students from Emory and Georgia Tech browsed with their friends and a good number of locals from the greater Atlanta area were present. After flashing my Emory ID to the woman at the ticketing counter, I began my walkthrough of the museum.

After a few brief stops in the New World and Greco-Roman galleries, I made my way through the Ancient Egyptian and Near Eastern collections and up a flight of stairs to the exhibition’s entrance. Walking in, I was greeted by a collection of Yoruban artifacts representing a god of thunder, Shango. Crafted primarily of heavy, dark woods, and always by hand, these objects of traditional religious significance had an unusual objective charisma to them; I felt engaged in their history by bearing witness to them.

In fact, this was a common trend throughout the showing. Almost every single piece presented was very obviously handmade. Slight imperfections, absences of machine-like perfect symmetry and plainer materials such as wood or stone offered a breath of fresh air from other presentations of only the finest, most valuable objects of the ruling classes. These items were used by people who lived an ordinary life, and the exhibition makes this very clear. Those works in the exhibit that were more of the fine arts tradition, such as Gavin Jantjes’ acrylic work “Untitled,” provided an intriguing and engaging counterpoint to most items in the collection that consisted of more mundane objects, such as furniture and drinking vessels.

As a viewer, it was satisfying to see some of the traditional trends maintain their narrative in spite of greater Western involvement in African nations. The fusion of African and Western European artistic genres offers a heterotopic space that one does not often find in modern museums; these works represent a historically unpresent minority in the arts community.

Looking at the big picture, the Carlos Museum did an excellent job of integrating the various media into a cohesive showing. The exhibition’s rooms on the upper floor were completely redone for African Cosmos, and it seems to have paid off. Museum attendees can approach much of the collection from multiple directions, allowing for a complete 360-degree viewing of some of the three-dimensional works, such as sculpture work or some of the wooden pieces. Allowing a viewer to look at so many of the pieces from all sides further exemplifies what this exhibition has done right: it is accessible, both in terms of literal viewing and in explanations of the pieces for those that may not be familiar with the cultural traditions from which they have been drawn.

Furthermore, greater representation of digital and film media (such as William Kentridge’s short “Day for Night”) covered significantly more artistic genre than most are accustomed to finding in a museum. I hope to see more integration of multimedia displays in the museum; maintaining relevance in both content and presentation is crucial for a museum that hopes to have a meaningful presence in its community.

In conclusion, the African Cosmos exhibition is a modern museum exhibition done right. It has created an intellectually accessible space for all those who wish to come. In addition, its integration of multimedia and a simple, elegant floorplan show what all presentations should strive to do. The presence of children and local, non-Emory-affiliated community members on the day of the grand opening is an encouraging trend as well, hopefully indicative of greater outreach on the part of the Carlos Museum.

It is worth noting that your Emory Student ID Card gets you in for free — setting aside even one hour on a free afternoon would be well worth the investment. If you have not been to the museum yet, you most certainly need to; it is an opportunity unique to our campus that is really something special.