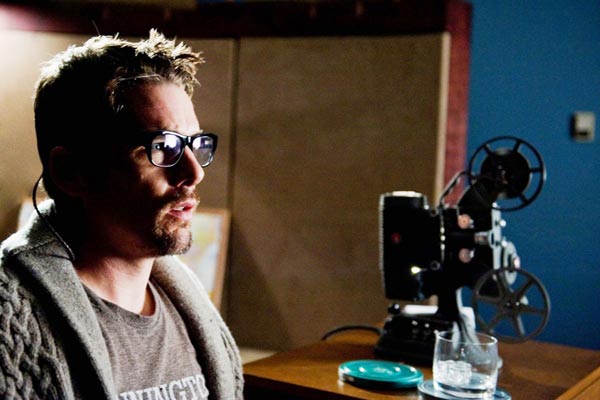 As Halloween approaches, those horror fans looking for a cinematic alternative to the latest entry in the “Paranormal Activity” saga will find themselves at home with “Sinister,” a new haunted house film that brings to mind classics like “The Shining” and “The Changeling.” Look behind the scenes, however, and you will find that the film serves up something much more sinister: a collaboration between a filmmaker and a film critic.

Well, actually, the details are far more civil than one might think.

In one corner, there is Scott Derrickson, an up-and-coming filmmaker who first made a splash with the 2005 horror/courtroom drama hybrid “The Exorcism of Emily Rose” and followed that film up with the 2008 remake of “The Day Earth Stood Still.” In the other corner, there is C. Robert Cargill, who for nearly 10 years, contributed reviews to the popular film site Ain’t It Cool News under the moniker “Massawyrm.”

“Sinister” serves as the brainchild of the two, with Derrickson directing and co-writing the script along with Cargill. The film stars Ethan Hawke (“Daybreakers”) as a true crime novelist named Ellison Oswalt who, in the midst of researching the grisly, unresolved massacre of a small-town family for his new book, ends up moving his own wife and two children into the murdered family’s home. Ellison eventually, stumbles upon a box full of Super 8 home movies, that document other gruesome family murders over the past 50 years. As Ellison’s obsession with solving the mystery grows, strange, supernatural occurrences begin plaguing him and his family.

For Cargill, “Sinister” acts as the realization of a long-held dream to write his own movie. While the notion of film critic becoming a functioning member of the Hollywood industry might seem ill-advised to some, Cargill does not concern himself too much with running into the same people he used to publicly criticize.

“There’s always a small fear,” Cargill said in an interview with the Wheel. “[But] a lot of people don’t take it as personally as you think. The people who do are not in the industry for very long.”

One of Cargill’s biggest admirers was Derrickson, who frequently read his Ain’t It Cool reviews and even checked out films he initially dismissed, after hearing Cargill’s recommendation.

“For filmmakers, critics matter if you know they’re good critics,” Derrickson said. “Then, you should value their criticisms. [Cargill] was my favorite online critic, so I care what he thinks.”

Finding that they shared similar interests, the two arranged a meeting when they both happened to be staying in Las Vegas.

By the end of the night, Cargill pitched Derrickson the idea that would become the genesis for “Sinister.”

Although Cargill gave a positive review to “The Day the Earth Stood Still,” Derrickson claims that he would have worked with Cargill even if the review had been bad.

“You can’t take that stuff personally,” he said. “If a critic gets personal, then you can take it personal. And I’ve had that happened once or twice, and those are the only reviews I think about. I’m like, ‘what a dick, why is he attacking me?”

That’s not to say, Cargill’s background as a film critic does not occasionally come back to bite him. During the end of one particularly stressful day, Derrickson let it slip to the film’s producer Jason Blum, that Cargill gave negative reviews to the first two “Paranormal Activity” films, the two flagship projects of Blum’s company.

“Everyone was just in a bad, weird mood,” Cargill recounted. “Then, just out of the blue, Scott mentioned to Jason that I didn’t like ‘Paranormal 1’ or ‘Paranormal 2.’ Ten minutes go by, Jason and I don’t say a word to one another. He’s just on his phone.  Then, finally, he says, ‘so, you didn’t even like the first one?’ So, I had to explain it to him and laid out my argument. He was like, ‘okay, that makes sense.'”

Production-wise, since the vast majority of the film takes place in the seemingly innocuous suburban house, that Ellison and his family inhabits, Derrickson sought to create a compelling setting that acted as almost a character in itself.

“The challenge was not have the movie feel claustrophobic,” he explained. “That’s why I shot it in such wide lenses and why there’s so much black in the movie. Darkness plays as infinity.

The movie doesn’t feel small. It feels like a studio picture. That was certainly a strategy. It was also about keeping the audiences attention where it out to be, which is on [Ellison]. It’s a one-man show.”

In casting their “one-man,” Cargill and Derrickson actively pursued Hawke, who they believed was perfect for the role.

According to Cargill, their respect for Hawke reached a fever pitch during the shoot, especially after he showed intense dedication during one of the film’s more complex set-ups. The scene in question involved Hawke collapsing on the floor and foaming at the mouth.

Meanwhile, the young actress playing his daughter had to hit specific cues and the mug that Hawke was holding had to fall in a certain way. After 17 failed takes, the crew was growing weary and tired.

“Scott had this pained look on his face and just said, ‘look we’re going to do two more and we’ll get it,'” Cargill recounted. “Then Ethan, with a mouth full of foam, said, ‘no, no, if I go into this movie and this scene sucks, I’m going to be so pissed off. We’re going to get this right. Don’t worry about me. Let’s do this scene.’ That calmed Scott and the entire crew down.  Two takes later, it was perfect and that’s what you see in the movie.”

Contrary to popular perception, Derrickson and Cargill’s partnership comes across less as filmmaker/former critic and more like two film nerds who seek to make the kind of horror experience that has become somewhat extinct in the current Hollywood market.If nothing else, their collaboration stands as an ideal example of how a relationship that could have been bitter and harsh instead became respectful and productive.

Always one to keep up his good-natured and fair reputation, Cargill even promptly referred back to his critique of the “Paranormal Activity” franchise to add a positive spin.

“I actually did like ‘Paranormal Activity 3,'” he said with a smile.