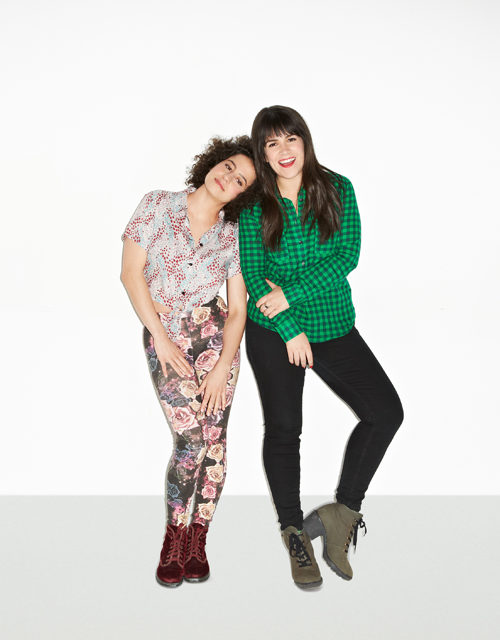 Comedy Central has found its answer to HBO’s “Girls.” The pilot involved two 20-somethings’ attempts to raise money for a Lil Wayne concert: stealing from work, street performing and cleaning the apartment of a creepy guy (played by “Saturday Night Live” cast member Fred Armisen) in their underwear. Let’s just say their efforts to get to “Weezy” were not successful.

On Saturday, March 8, the duo behind that new comedy show, “Broad City,” will perform at Terminal West in Atlanta as part of their 18-city Broad City Live Tour.

The inspiration for the show, according to Jacobson, was the two women’s friendship.

“We just noticed that our friendship was really, really funny to us – we had a great dynamic,” Jacobson said in a college conference call in which the Wheel participated.

She added that, at the New York City-based theater company Upright Citizens Brigade (UCB), neither of them were ever chosen for improvisation teams.

“We just thought, let’s do our own thing,” Jacobson said.

From 2009 to 2011, “Broad City” existed as a web series of two- to seven-minute sketch clips following Glazer and Jacobson as they try to get into yoga, sexually exploit their friend for his washer and dryer and prove to their moms that they aren’t in a lesbian relationship.

In the season finale, Poehler guest-starred as herself, egging them on as they make a dramatized dash for fresh cookies at a New York coffee shop.

“Amy [Poehler] has been involved all the way,” Glazer said, adding that Poehler even helped them pitch their show to Comedy Central. “Who wouldn’t want her to take part?”

Both Jacobson and Glazer are alumni of UCB, which has produced actors like Poehler, Rob Corddry of Adult Swim’s “Children’s Hospital,” Ed Helms of “The Office” and Anthony Jeselnik of Comedy Central’s “The Jeselnik Offensive,” to name a few.

“UCB and the New York comedy community … totally shaped our abilities,” Glazer said, calling the theater company “a tight support group” that “allowed us to have the confidence to make the web series in the first place.”

In 2011, The Wall Street Journal described the web series as “sneak-attack feminism,” but Jacobson said that, though they enjoyed hearing about the label, she and Glazer “don’t have that agenda.”

“‘Sneak-attack’ is an awesome way to say that we’re not just female actors and female writers – we’re just actors and writers,” Jacobson said.

Glazer added that the comedy world they came from “never felt like men-versus-women comedy” until they reached mainstream media.

As for its comparison to “Girls” in articles by The New York Times, The New York Post and The Washington Post, both women said they were honored to be placed on the same level as the HBO show.

Though “Broad City” illustrates a raunchier, more purely comedic picture of post-college failure than “Girls” does, both focus on the obstacles of navigating New York City in a generation of selfies and a slumping job market.

“I think our generation has a prolonged adolescence, and the show definitely shows what it feels like,” Glazer said. “Both girls went to college, used it and abused it, as middle-upper-class girls do.”

Perhaps what sets “Broad City” apart from “Girls” and CBS show “2 Broke Girls” is the fact that it is indeed written by, performed by and completely based off of the lives of two college graduates living in New York.

“We try to base the scenes of every episode on things that happened to us, the writers, the crew,” Jacobson said, adding that they keep a spreadsheet of episode-inspiring shenanigans.

The two also recognize the advantage of essentially playing and writing for themselves, calling it “a rare opportunity.”

Jacobson said she enjoys accentuating her insecure side, while Glazer said it’s simply “the best way to perform.”

With their new spot on Comedy Central, the duo faces the challenge of performing for a full sitcom length, rather than that of the several minute clips they broadcast online.

Jacobson said they “loved this transition,” which Glazer called their “TV college.”

“When we started, I would never have imagined this happening,” Jacobson said.

Who knows – maybe in a few years they’ll produce a new show on two queens of comedy with a seasoned knowledge of the ins and outs of in New York City.