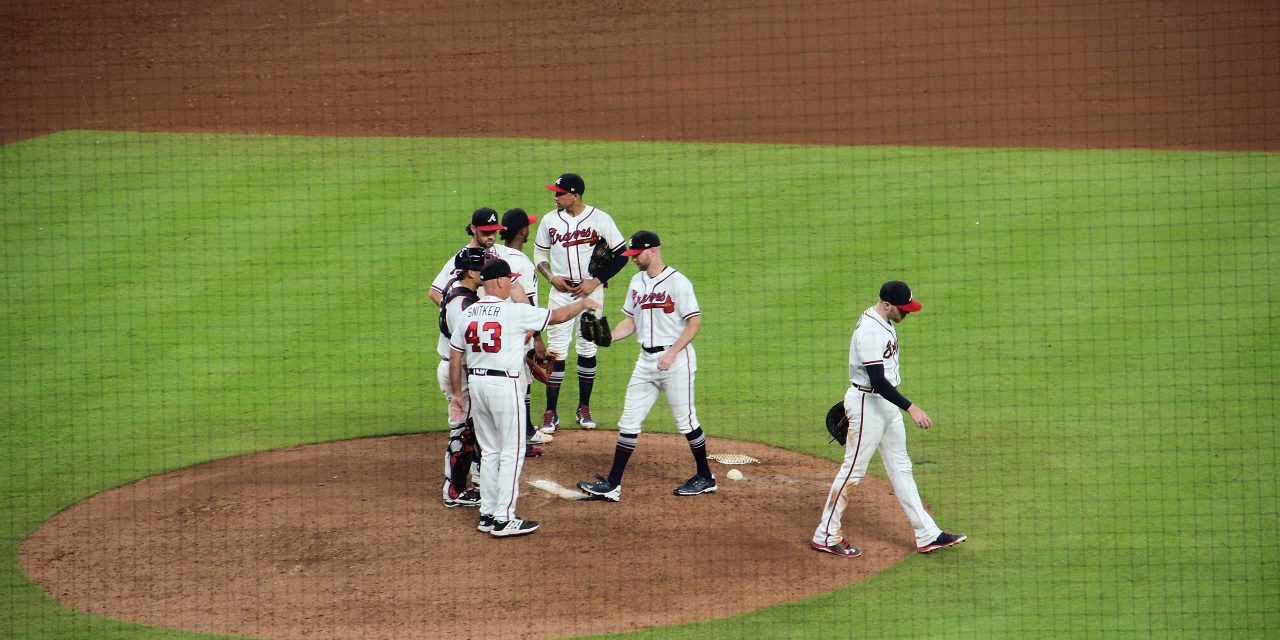 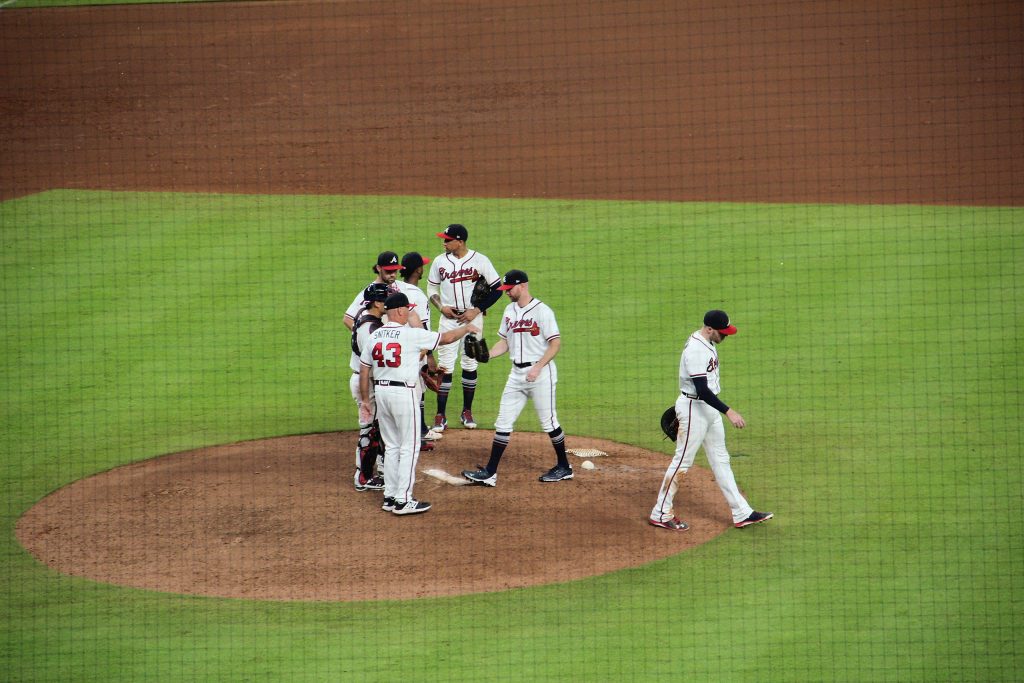 The Atlanta Braves discuss gameplay in a game against the St. Louis Cardinals on Sept. 18, 2018. This year, the Braves are partaking in the MLB’s shortened season due to coronavirus./Courtesy of Wikimedia Commons

With very few professional sports continuing during the coronavirus pandemic, the fate of the 2020 Major League Baseball (MLB) season was on every baseball fan’s mind. After many months of uncertainty, the MLB announced on June 23 that baseball would continue with a significantly shortened regular season. The new season, which began on July 23, is only 60 games long and will end as originally scheduled on Oct. 31. While the season may be shorter, fans are no less excited to see their favorite teams back on the field, even from their couches.

Despite the uncertainty amidst the pandemic, the MLB’s plan for return focuses on the safety of players and coaches. On top of the shortened season, teams are playing a majority of their games against teams in their own division to minimize travel. While COVID-19 protocols existed in the beginning of the season, new restrictions have been enacted due to recent outbreaks in many clubhouses.

The revised protocols include requiring players and staff to wear masks at all times, except when on the field. Staff and players also cannot congregate in each other’s hotel rooms while on the road and there must be a minimum of four busses used for travel with an unoccupied row separating the players from each other.

Once the regular season comes to a close, the expanded postseason will begin Sept. 29, with 16 teams, eight from each league, included. The current regular season, though, began to crumble when four Miami Marlins players reported contracting the virus, which quickly became 19 Marlins’ players and staff. After their three-game series against the Philadelphia Phillies, the Marlins postponed their flight back to Miami, quarantined in Philadelphia, which consequently postponed their home opener against the Orioles.

Luckily for the Atlanta Braves, they have been able to play all of their games and have so far avoided the chaos of rescheduling. Aside from possible exposure to the coronavirus, their only obstacle now is clinching the number one seed in the National League (N.L.) East and topping the COVID-19-stricken yet first-place Marlins.

Standing as one of the top teams in the N.L. East, the Braves and their young core are performing at a high level this season, with an overall record of 11-6. The goal of the 2020 season and every other season for the Braves, is to bring the Commissioner’s Trophy back to Atlanta. While the beginning of this season is giving fans an optimistic outlook, the Braves do not have the cleanest track record for making it far in the playoffs, despite how well their last regular season ended. In their 2019 season, the Braves finished first in the N.L. East, with a record of 97-65, only to lose in the N.L Divisional series against the St. Louis Cardinals. Unfortunately this was no surprise following their 2018 season where the Braves were the top seed in the N.L East and had a 90-72 record, but lost in the N.L Divisional series again, this time to the Los Angeles Dodgers.

However, the Braves are playing full steam ahead with players such as shortstop Dansby Swanson, having an especially impressive start to the season. Coming out of Vanderbilt University (Tenn.) as the No. 1 pick in the 2015 MLB Draft, Swanson is now near the top of the MLB in hits, with an impressive .281 batting average so far this season. After struggling early on from high expectations, it seems as if Swanson has found his nook. Swanson is continuously improving, and if he can keep his momentum going, 2020 could end up being his breakout season.

The Braves’ talent, though, is not limited to Swanson. Leading the N.L. East in stolen bases is outfielder Ronald Acuña Jr., who has also played a key role in the Braves’ defense. The 22-year-old was fifth in the N.L. in home runs in 2019 with 41 in just his second big-league season. In the Braves’ recent series against the Philadelphia Phillies, Acuña hit two homeruns in the span of 30 minutes, a small feat for this 2019 Home Run Derby Participant. Already achieving the accolade of being one of the four players in MLB history to total at least 60 home runs and 50 stolen bases at age 21 or younger, Acuña Jr. has set his mind on another exclusive group. Acuña Jr. could easily join the grouping of Alex Rodrigez, Mike Trout and Andruw Jones as the only players to achieve 80 home runs and 70 stolen bases, aging 22 or younger. The sky is the limit with Acuña Jr. and his athleticism and young spirit. Not only is he a valuable asset to the Braves for this season, but for the foreseeable future.

While the Braves’ have some incredible young talent, their veterans are also significant contributors and crucial to the team’s success. After arriving in Atlanta in 2010 as a spry 20-year-old, first baseman Freddie Freeman, now 30, has shown no signs of slowing down. The four-time All-Star and fan favorite has received the nickname “Mr. Consistent” by his fans. Not only is he a leader on the field, but he’s been dubbed the best first baseman the Braves have ever had thanks to his longevity, talent and impact. Freeman is projected to hit around 15 home runs this season and go on to win his second Silver Slugger award.

Keeping the depth of the Braves’ roster in mind, there are a few players that tend to slip under the radar, but should be kept an eye out for in the 2020 season. The first of these underrated players is Ozzie Albies. Albies is a 23-year-old infielder who has grown tremendously during his three years in the MLB. He reached career highs in 2019, ranking in the top 50 players for his on base average of .352, as well as ranking in the top 25 for his isolated power of .205. Fans have predicted that Atlanta’s “sprinter” will have his first Gold Glove season this year. Starting pitcher Max Fried is another play to watch out for. While there is much commotion about his potential, people tend to overlook his current stats. Fried reached an average fastball velocity of 93.8 miles per hour in 2019, and is putting on an impressive performance this season. In the Braves’ most recent game against the Phillies, Fried had five scoreless innings. Fried is not just a young pitcher trying to make it in the MLB anymore, but a legitimate starter.

With their 11-6 record, athletic roster and growing talent, the Braves are in a prime position to win the N.L. East. After failed playoff runs in 2018 and 2019, it’s time for the Braves to change their tune by embracing the chemistry of their young core and keeping their eye on the prize.

[email protected] | Sofia Himmel (23C) is from Philadelphia, PA. and is undecided with her major but on the pre-BBA track. When not writing for the Wheel, Himmel spends her time working on the Greek Council for the Emory Hillel and virtually tutoring elementary school students. After “trusting the process” for years, Himmel still wishes the Sixers offered Jimmy Butler the max salary slot.