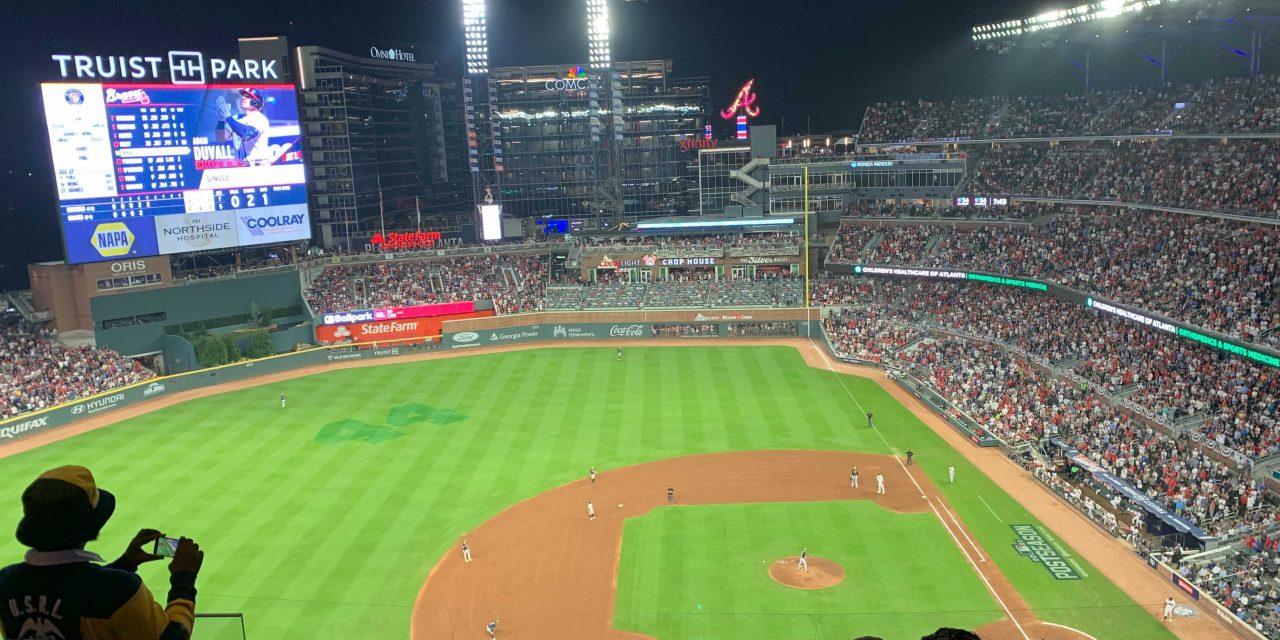 The Atlanta Braves beat the Milwaukee Brewers in the National League Division Series (NLDS) from Oct. 8 to 12 to clinch a spot in the National League Championship Series (NLCS), which started on Oct. 16. Their performance in the shortened 2020 season, particularly in the postseason where they fell one game short of making the World Series, marked the Braves as the strongest team in the NL East.

The Braves entered the 2021 season favored to win the NL East with an impressive lineup consisting of new players and MLB veterans alike. However, the Braves had a rough first half of the regular season, suffering blows to their lineup with injuries. Pitcher Mike Soroka blew his Achilles tendon, outfielder Marcell Ozuna dislocated two fingers during an early game in addition to a domestic violence case and catcher Travis d’Arnaud injured his thumb when preventing the Toronto Blue Jays from scoring a run. If those injuries weren’t enough, the Braves lost outfielder Ronald Acuña Jr. to an ACL tear, the team’s best player and one of the league’s best stars.

The Braves approached the trade deadline with a 51-52 record, but the acquisition of outfielder Joc Pederson and catcher Stephen Vogt seemingly turned the season around. In the second half of the season, the Braves bullpen delivered what their talent had originally promised, and the Braves’ hitting improved tremendously.

Thus, when the division series rolled around, the Braves came ready to play. Milwaukee won the first game of the division series at home and was favored to advance to the NLCS. But the Braves persevered and won three games in a row to seal the deal. The final two games of the series were played at Truist Park in Atlanta, where Braves fans came out in full force to back their team.

Atlanta clinched their berth in the NLDS during game four of a five-game series. Despite a slow beginning, the first inning looked hopeful for the Braves, but they were unable to bring second baseman Kolten Wong on third base to home plate. Both the Brewers and the Braves struggled to get players on base, leading to a 0-0 game going into the fourth inning.

During the top of the fourth, Brewers catcher Omar Narvaez and center fielder Lorenzo Cain hit two singles that brought right fielder Avisail Garcia and third baseman Luis Urias home. With two outs, the Brewers had the bases loaded and were in a good position to score, but Braves starting pitcher Charlie Morton ended the inning by striking out shortstop Willy Adames. The Braves deleted their deficit by scoring two runs in the bottom of the fourth off left fielder Eddie Rosario’s single that brought catcher Travis d’Arnaud and third baseman Austin Riley home.

The Brewers, though, only pushed back in the fifth inning. First baseman Rowdy Tellez hit a two-run home run to give Milwaukee a 4-2 lead. The Braves, however, continued to be resilient and responded. Second baseman Ozzie Albies scored off outfielder Joc Pederson’s single, and Riley scored right after to tie the game. The runs stalled in the sixth and seventh innings, with both teams struggling to get their bats on the ball.

In the bottom of the eighth inning, fans were starting to wonder if the game would lead to extra innings with the game tied at four. With two outs in the eighth inning, 2020 National League MVP and first baseman Freddie Freeman hit a home run to center field and gave Atlanta a 5-4 lead. Braves fans celebrated with their signature “Tomahawk Chop” and chant. Relief pitcher Will Smith came in to close the game for the Braves in the top of the ninth and struck out two Brewers hitters to secure Atlanta’s spot in the next round of the playoffs.

Atlanta now faces the defending World Series champions, the Los Angeles Dodgers, in the NLCS to fight for a spot in the World Series. The Braves have won the National League East Division for four consecutive years, but they have struggled to win and advance beyond the NLCS. Their last NL pennant was in 1999, creating a 21-year-old drought that is waiting to be broken. The Dodgers entered the series favored to win, given their extremely talented pitching staff and elite power in their lineup. However, the Braves are not listening to the oddsmakers and are looking to continue their unexpected playoff run.

The Dodgers snapped the Braves’ five-game win streak and now trail the Braves 2-1 in the NLCS. The first two games were tied until the ninth inning, where the Braves squeaked out a run to win each. In Game 1, Riley hit a walk-off single to win 3-2 and in Game 2, Rosario hit a walk-off single to Dodgers second baseman Corey Seager, who was unable to field the ball. This left the window open for shortstop Dansby Swanson to score the Braves’ fifth run.

In Game 3, the Braves led 5-2 but surrendered their lead to Dodgers outfielder Cody Bellinger’s three-run home run in the eighth inning to tie the game at five. The Dodgers then scored another run in the eighth to secure a 6-5 win and avoid a 3-0 series hole. The next two NLCS games will also be in Los Angeles where the Braves will be without their home-field advantage. 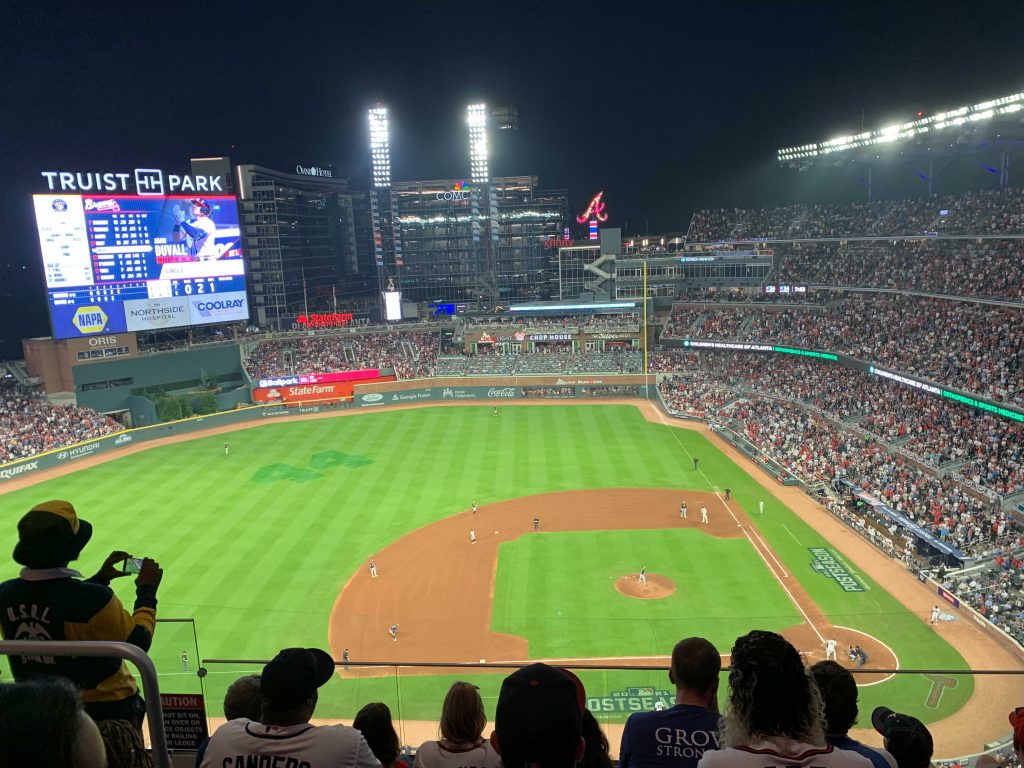 Truist Park, the home of the Atlanta Braves, during the 2021 MLB postseason. The Braves look to get past the defending champion Los Angeles Dodgers to advance to the World Series. (Jenna Daly/Contributing Writer)

Jenna Daly (she/her) (25C) is from Windsor Locks, Connecticut, majoring in philosophy, politics and law. She is also on Emory’s Cross Country and Track & Field teams. Daly was involved with her high school newspaper for four years and is excited to join the Emory Wheel.