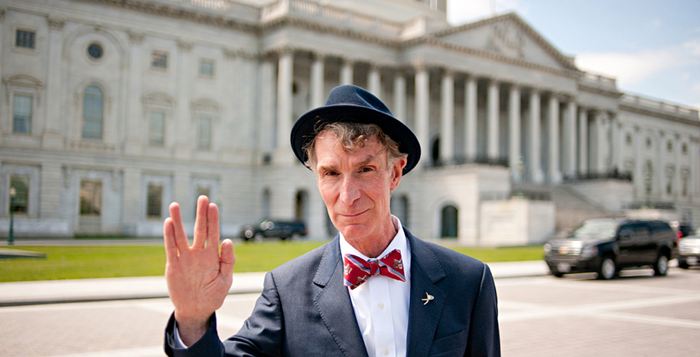 Courtesy of Flickr/navid baraty
Bow ties can spice up outfits while maintaining the wearer’s
sophistication, as we see above with Bill Nye the Bow Tie Guy.

From its origin as a battle emblem worn by Croatian mercenaries to its current day status as a signature accessory sported by celebrities like actor Idris Elba and fictional iconoclast Doctor Who, the bow tie has long symbolized debonair charm mixed with a subtle hint of “Frankly, my dear, I don’t give a damn” attitude.
Bow ties are a staple of any modern wardrobe, lending playfulness and an air of gentility to everything from the signature black tie look to the wacky patterns of the reversible bow tie.
How did this fresh, felicitous fabric end up draped around the necks of presidents, nerds and frat stars alike?
Following the Croatian mercenaries and their fashionable bloodlust, the French adopted the “Cravat,” as they called it, and it became a symbol of upper class fashion.
As style, materials and a shift away from aristocracy occurred, the modern evolution of the bow tie followed. Once relegated to fusty college professors, cheap magicians and certain “learned gentleman” such as doctors and lawyers, the bow tie has made resurgence among all walks of life.
TV producer and bow tie-wearer Rick Kaplan once offered the following assessment of the aura portrayed by those with a penchant for non-traditional neckwear: “Wearing a bow tie is a statement. Almost an act of defiance.”
Donning a bow tie bids the world of haute couture, style guides proscribing what’s ‘in’ or ‘out’ and expensive esotericism a hearty “Forget you,” as the bow tie characterizes the wearer as a statement maker and highly individual.
Whether on a date in Midtown or a Sunday stroll in Lullwater, nobody in their right mind will look at you wearing a bow tie and think “What on Earth are they wearing?” Instead, they see someone who is cool and confident in their individuality, refined and rambunctious, taking no shit from the world.
The beauty of wearing a bow tie today means that you do not have to raid your grandfather’s closet, digging between mothballs and denture cream to find a cool ‘retro’ tie to be edgy and sophisticated. You are just as likely to wade through your apartment of empty pizza boxes and Red Bull cans to find the same thing.
One thing needs to be clear: The bow tie is not an accessory added on to a certain look you are trying to achieve. It is the look. It is you.
As an owner of 18 bow ties that range in color from standard black to Emory tartan plaid, my bow ties are as much who I am as my hometown, my major or my inclination towards referring to everyone as y’all.
Each bow tie represents a story, a memory. A piece of the puzzle that is who I am as a person. Take, for example, my first bow tie: maroon (my high school’s color) with polka dots. Bought as part of an academic team uniform, that tie represented our team spirit. Our personality. When teams saw the slightly off-center dimpled bow across the room, they knew we meant business.
Before you shrug off the suggestion and say “bow ties aren’t for me,” take a look at the wide variety of personalities and looks of famous bow tie aficionados: Bill Nye. Karl Marx. Frank Sinatra. Winston Churchill. Dr. Who. Emory’s own Gary Hauk.
Hell, Budweiser, Chevrolet and Kentucky Fried Chicken all like bow ties so much they made them part of their logos.
Whether it is one or 100, everyone must do their civic duty and wear a bow tie at least once a year. Make a statement.
Why? In the words of the Doctor, “Bow ties are cool.”