In the general election yesterday, Bottoms received 26.83 percent, and Norwood received 20.57 percent as of 1:06 a.m. with 95 percent of votes counted, according to the Atlanta Journal-Constitution. The AJC called the election as a runoff between Bottoms and Norwood at 12:53 a.m.

Outgoing Mayor Kasim Reed has held office for two terms since 2010 and could not run for re-election. A total of nine candidates were on the ballot.

Nearly 2,500 registered voters in 1.114 miles containing the University’s main campus planning to be annexed by the city of Atlanta were not eligible able to vote in the mayoral election because the proposed annexation has been put on hold due to a dispute regarding the effect of annexation on the Atlanta and DeKalb County public school district boundaries. The annexation was planned to be completed Sept. 5, but now will not be finished until December at the soonest, according to the Atlanta Journal-Constitution.

Reed endorsed Bottoms Oct. 11, according to WABE. He also criticized some of the other candidates in a V-103 radio interview, claiming that nobody running could beat him.

The woman who wins will be the second female mayor in Atlanta history. If Norwood is declared the victor, she would be the first white Atlanta mayor since 1974, according to The New York Times.

Bottoms’ campaign platform calls for an “All Rise” program, according to her campaign website. The program aims to improve public safety, resolve traffic and transit problems, develop affordable housing, create new jobs and support students and families through education.

Norwood hopes to increase public safety by working with state and federal law enforcement agencies to fight human and sex trafficking and help victims, according to her campaign website. She also plans to increase sustainability initiatives by installing solar panels on public buildings and upgrade transportation and infrastructure systems, according to her campaign website.

Bottoms took the lead from Norwood in a WSB-TV/AJC/Landmark Communications poll released Nov. 1. The poll asked 750 eligible voters, “If the election for mayor of Atlanta were held today, for whom would you vote?” Results showed Norwood and Bottoms as the only two candidates with more than 20 percent of votes. Bottoms led with 25.4 percent while Norwood fell to second place with 24.3 percent.

Both candidates support Emory’s annexation into Atlanta. Norwood stated that she would be “delighted” if Emory became a part of Atlanta, according to AJC. Bottoms stated that Atlanta is fortunate to have Emory, the Centers for Disease Control and Prevention (CDC) and Children’s Healthcare of Atlanta (CHOA) asking to be a part of the city, previously reported by The Emory Wheel.

Norwood is an Emory alumna and has served on the Mayor’s Blue Ribbon Commission on Waste and Efficiency, the Atlanta Repeat Offenders Commission and the Code Enforcement Commission Meeting during her time as a city councilwoman.

Bottoms has served as vice chair of the Public Safety Committee and as chair of the Council’s Zoning Committee. She has also served as executive director of the city of Atlanta and Fulton County Recreation Authority (AFCRA), where she has managed government relations and public finance.

“We think Lance Bottoms will be a smooth transition from the Reed administration,” Palmer said. “We’re excited that she is getting to advance her agenda and especially in working on low-income housing and transportation … [and] reforming MARTA and gridlock and infrastructure.”

Palmer said that Norwood is “essentially the Republican in the race,” and has a more conservative record than Bottoms, excepting her support of LGBT rights.

Young Democrats of Emory members have been working in various candidates’ campaigns, Palmer said. The executive board discussed endorsing a candidate but decided to wait until the runoff. 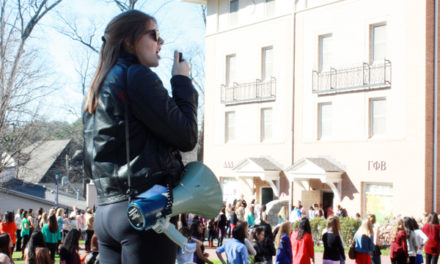