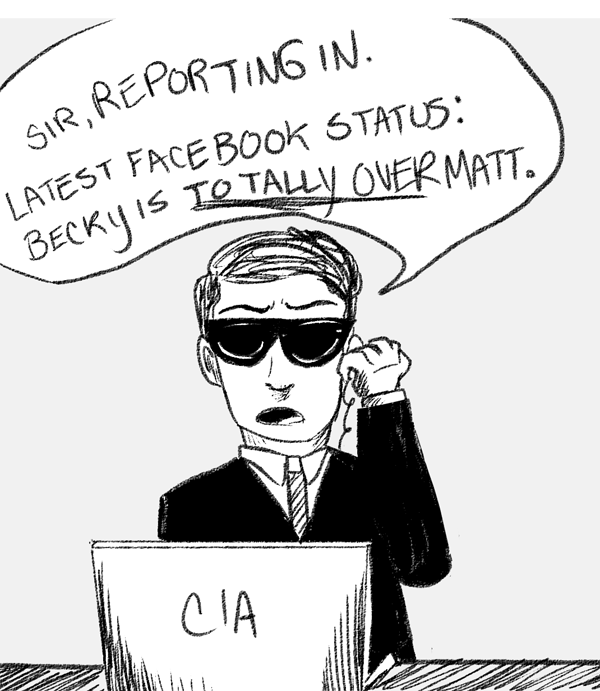 An article published by The Onion last Thursday titled “Jesus, This Week” quite succinctly encapsulated what most Americans likely felt about the events which unfolded recently. An explosion in Boston, followed by another in Texas, killed or maimed hundreds of people. At the same time, a comprehensive gun reform bill failed in Washington. All told, it was a horrible week in the United States. Amidst all of this bleak news, legislation passed in Congress that slipped through the cracks of the media. This new bill, if signed into law, could affect every American who uses the Internet, and it would blatantly violate the Fourth Amendment.

The Cyber Intelligence Sharing and Protection Act (CISPA) passed by a vote of 288 to 127 in the House. The bill’s purpose, as its text reads, is “to provide for the sharing of certain cyber threat intelligence and cyber threat information between the intelligence community and cybersecurity entities, and for other purposes.” Ostensibly, CISPA would allow private companies to identify cyber threats and then report them to appropriate government or private agencies where they may be addressed. This seems like a good thing. In a world where cyberterrorism is an increasing fear, and where skilled hackers can potentially access private and public records online, we probably should have increased cybersecurity.

However, CISPA does little directly to ensure the public’s safety. Instead, the bill would allow companies, such as internet service providers, search engines or social media outlets, to anonymously share private information and data to government agencies and other private companies “notwithstanding any other provision of law,” according to the bill. In short, Google, Facebook or any other company could share your information with the government free of legal liability, effectively eliminating online privacy.

The Fourth Amendment ensures “The right of the people to be secure in their persons, houses, papers and effects,” and several recent judicial decisions establish precedent for this right to be extended to online communications as well. Lawmakers on Capitol Hill, however, explicitly disregarded the Constitution, voting down an amendment to the bill that would ensure user data submitted to the government would be kept anonymous.

Perhaps unsurprisingly, the Boston bombings were invoked during debates for CISPA, continuing a dangerous trend. Time and again, lawmakers have chipped away at civil liberties in the name of “security” and in response to “threats.” These sorts of scare tactics have the effect of galvanizing public support for what would otherwise be objectionable policies and regulations. Take, for example, the city of Boston as the manhunt for the second suspect in the bombing was underway: police, SWAT teams and federal agents went door-to-door in Watertown, Mass. searching houses without warrants. While this technically did not violate the Fourth Amendment (it was an emergency circumstance), it does represent an extreme instance of citizens sacrificing their rights in the interests of public safety – and in this case it appears to be justifiable.

As a democratic society, however, it is our duty to be wary of situations in which our rights may be violated. Surely the most important right is that of life but, to paraphrase the words of Patrick Henry, our right to life must not be purchased at the expense of chains and slavery. As such, we must choose to live in either a free society or an oppressed one. Choices like this are immediately evident in the wake of tragic disasters which politicians are so eager to abuse for political gain.

It is true that a government has a responsibility to protect its citizens. It is equally true that a democratic government must protect its citizens’ rights. CISPA may not pass the Senate. Even if it does, it may not receive President Obama’s signature. However, a greater issue is on the table here – liberty versus security. Both are essential to a well-functioning democracy, yet neither is easy to maintain. The solution is a responsible and informed electorate which holds its representatives accountable, so that the next time a “Jesus, This Week”-style event occurs, we can more effectively work to protect both life and liberty.

William Hupp is a College sophomore from Little Rock, Ark.