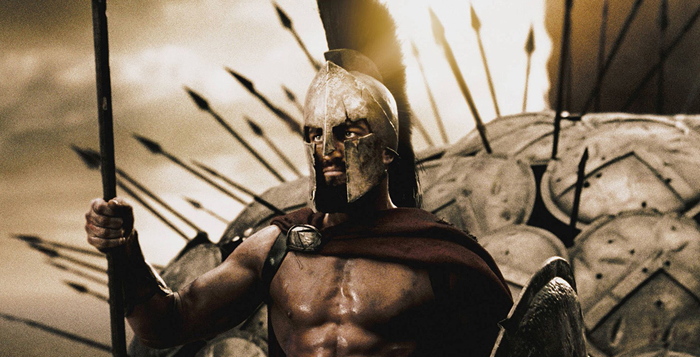 Courtesy of Warner Brothers
Warner Brothers’ new release “300: Rise of an Empire” exists in the same world as 2006’s “300.” Both films are loosely inspired by historic Spartan battles.

This particular red parade of machismo-mania and gore is not for the scholars and purists of history. “300: Rise of an Empire” a sensationalist’s massacre of historical facts that depicts Greek culture as a cesspool of such acute homophobia that can only be read as homoerotic. Such is the tendency of entertainment.

But now that we have that disclaimer out of the way, cinema-goers might find “300: Rise of an Empire” a more satisfying venture than its insta-classic predecessor in its complexity in plot and its richer array of characters and backstories. But the film’s greatest achievement is the crafting of its utterly kick-ass villainess.

Directed by Noam Murro (“Smart People”) with a script by Zack Snyder (“Man of Steel,” “300”) adapted from the original graphic novel by Frank Miller (Sin City), “300: Rise of an Empire” takes place simultaneously, before and immediately after the events of “300.”

Inspired by the true events of the Battle of Salamis, the story follows the legacy of Athenian naval general Themistocles (played by Sullivan Stapleton, “Gangster Squad”). As the canonical 300 Spartans face a “beautiful death” at Thermopylae, Themistocles strives to unite all of Greece for a definitive fight against the invading Persian Empire. The Father of Democracy meets his match in Artemisia, the leader of Persia’s navy. Artemisia just so happens to be a woman, played by indomitable femme fatale Eva Green (“Casino Royale”). What results is a series of epic battles on the Mediterranean Sea that end in Greece’s united triumph against the Persian Empire.

This new film retains the iconic burnt sienna color palette of its predecessor; the crimson scarves of the Spartans are replaced with the rich cerulean blue capes of the Athenians, while maintaining the luxurious and demonizing hues of black, bronze and gold leaf on the Persian adversaries. The battle sequences do not disappoint, magically utilizing the brilliant potentialities of the churning, stormy sea as battleground.

In one critical battle, Artemisia astutely employs elements seemingly incompatible with naval warfare: fire and oil. Launching a single flaming arrow upon a suicide bomber depravedly planted in a sea of oil, she lays waste to a devastating number of Themistocles’s vessels without straining a single muscle. This also leads me to my next point: the men in this film are all a bit sorry.

The fact of the matter is that the male performances in this film fall comparatively flat to the work of the two female actresses. The miscast Stapleton flimsily delivers his bored, uninspired speeches penned by admittedly weak writers. In fact, the film is mottled with far too many cringe-worthy, pseudo-archaic exchanges between the brothers-in-arms that they all start to fester into one general expression about duty to Mother Greece and freedom.

“We chose to die on our feet, rather than live on our knees,” he announces. Fantastic! Now can we fast-forward to the bits with Green? Her acting is what really owns the screen. While Stapleton ably performs stunts and flaunts the necessary Adonis build, he simply fails to convincingly command the respect and loyalty of his awkward men as well as the loyalty of audiences.

Green is the one to watch in this film as she dominates the screen with her deadly concoction of skillful violence and sexuality; in one scene, Green decapitates an Athenian soldier and kisses the cold lips of his severed head. With a character backstory of unspeakable tragedy and furious comeuppance, Green will have you wanting to die for her on the battlefield.

Her gothic rage and cold manipulations of the Persian god-king Xerxes will have you bemoaning the facts of history – her infidelity to the story’s “good guys” creates an interesting and delicious feast of tension.

But this is not completely out of fashion; the figure of Artemisia is merely the latest in a contemporary resurgence of “bad” women with whom audiences seem to fall utterly in love.And yes – Artemisia was a real historical figure and was indeed a female Persian naval commander.

That she slashed men down like a dancing dervish of death, all the while clad in awesome black leather armor adorned with golden dinosaur vertebra is a bit doubtful. Is she worth spending an hour and a half film to get to know? Maybe not.

But the level of sensationalism and stylistic fun accounts for much of the appeal in watching “300: Rise of an Empire.” Save your desire for intellectualism for another film and give in to the blood lust.