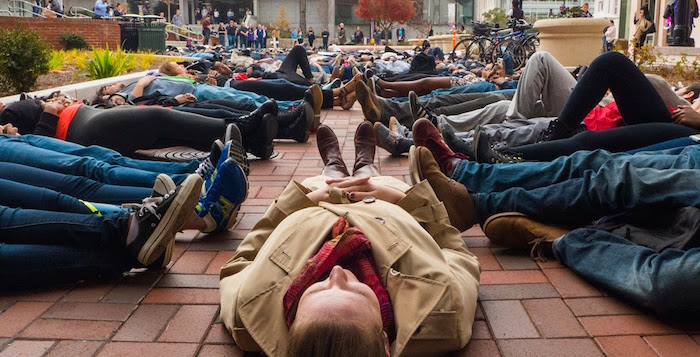 After a grand jury did not indict police officer Darren Wilson for the shooting of unarmed teenager Michael Brown and, less than two weeks later, a grand jury did not indict police officer Daniel Pantaleo on charges related to the death of Eric Garner, Emory students and community members protested throughout campus, joining protests around the nation as part of the Black Lives Matter movement. The protests occurred on Wednesday night (Dec. 3) and Thursday (Dec. 4) at noon, with protesters carrying signs and chalking outside of the Dobbs University Center (DUC) and on Asbury Circle.

Chalk outlines of bodies covered parts of campus as students split into groups and traced fellow students’ bodies in chalk, recreating the look of a crime scene in which a black innocent had been killed. Written phrases such as “Black Lives Matter” were scatted throughout the pavement, zigzagging around the bodies. Students wrote names of their friends and loved ones inside the chalk outlines, representing the killing of black people throughout the nation.

During the protest Wednesday night, students marched throughout campus, beginning in Asbury Circle and moving through the Robert W. Woodruff Library and Woodruff Circle. At one point in the night, protesters blocked off traffic on Clifton Road, holding signs that read “Black Lives Matter” and “It Is Our Duty to Fight for Freedom” and chanting, “Turn up, don’t turn down, we do this for Mike Brown;” “Indict, convict, send those killer cops to jail. The whole damn system is guilty as hell,” “Black lives matter,” “No justice no peace” and “I want to live.”

First and foremost, Oshin wrote that she wants this protest to make black students at Emory know that they are important and that they matter.

“[This protest] is about us – Black people, the oppressed, Black Emory,” she wrote. “I hope that WE can all feel important here. I hope that WE can all face the hard truth that we are no different from Michael Brown or Eric Garner. So within Black Emory and our wonderful supporters, I hope this protest impacted us all positively. For everyone else, well, I don’t really care.”

After the success of Wednesday night’s protest, its organizers staged a “die-in” outside of the Candler School of Theology. According to their Facebook page, the purpose of the die-in was for protesters to participate in the physical act of laying their bodies on the ground in solidarity with Brown, Garner and other black victims of police brutality.

The die-in began at noon and, by 12:40, there were around 200 protesters there. From the ground, unified chants rang out: “I can’t breathe,” “black lives matter,” “your silence will not protect you.” Later: “no justice, no peace, no racist police,” “I am not three-fifths, I am not a fraction,” “the people, united, shall never be defeated” and “we will not forget you Kendrick Johnson,” referring to a Georgia high school student whose body was found rolled up in a wrestling mat on Jan. 11, 2013.

According to a 2012 study done by the Malcolm X Grassroots Movement, an antiracist grassroots activist organization, an officer kills a black man every 28 hours.

The six student organizers came together through a Women’s, Gender and Sexuality Studies class titled Black Feminist Thought, taught by Professor Rizvana Bradley. According to Oshin, when the decision not to indict Pantaleo came out, groups of students were disgusted, and they decided something had to be done quickly.

Coordinating though Facebook and text message, the protest Wednesday night was organized with little time around 5 p.m. on Wednesday, according to Oshin.

Oshin wrote in an email to the Wheel that the purpose of the protest was to acknowledge the fact that “we will no longer stand for this.”

Joseph, another of the protest’s organizers, felt that this protest had been a long time coming. She said that something had to be done because of the long list of cases piling up, the Garner decision being the tipping point.

Joseph also highlighted the importance of this protest taking place at Emory, a place she said she has found to be difficult to be a part of as an African American.

“Emory is a really oppressive place to be,” she said. “It’s really hard to be here and to be Black because if anything you are written into non-existence … We don’t exist here to the white community and … its hard to exist in a space where you feel you are not wanted.”

College sophomore Ashley Graham was moved that the Emory community could come together in support of the Black Lives Matter protest. “I am so proud of Emory right now.” Graham said. “This is really an act of mobilizing, and I am so thankful that we could come together as a community whether you’re black, you’re white, you’re Asian, you’re Hispanic, whatever you are – that people come together and realize that this is an important cause.”

Another organizer, Campbell, also said she felt the solidarity among all the different communities at Emory during the protest.

“I was really proud of all of us coming together for this cause. It was a long time coming, [and] I feel like we really needed to let out our emotions that have been building up for so long, especially in the face of injustice that has happened recently,” Campbell said.

Campbell also said she was happy that the protest received respect from the University and the police officers.

“I’m definitely glad that we were able to do this,” Campbell said. “We really did shut everything down so that people can know that black lives matter.”

Of the die-in on Thursday, College senior and Woodruff Hall Resident Advisor (RA) Vincent Vartabedian said he thought it was great Emory students were gathering to make a statement.

During the die-in, Candler School of Theology Dean and Professor of Christianity and World Politics Jan Love addressed the crowd.

Senior Lecturer in African American Studies Department Nathan McCall wrote of the protest that “it was so refreshing to see Emory students joining the growing chorus of people around the country who recognize that there is something terribly wrong with our justice system, and it needs to be fixed now.”

He was also in disbelief of the lack of indictment in the Eric Garner case.

“If the shooting of Michael Brown in Ferguson leaves room for debate, the same cannot be said of the choking of Eric Garner in New York,” he wrote in an email to the Wheel. “I’ve watched the video replay of Eric Garner’s death, over and over. It’s mind boggling to think that a grand jury could not see what is so readily apparent.”

McCall also noted that in less than two weeks, two juries have returned verdicts failing to indict white officers for killing black men. He said it almost feels like we’ve gone back in time.

“It’s like Birmingham in 1955,” he said. “I was watching a demonstration on TV and I saw someone waving a sign that captures the sense of frustration many of us feel. It said ‘I am sick of having to protest for the right to live.’ For me, as for many blacks, it feels like our tax dollars are being used to help finance our oppression.”

The protest on Wednesday night reflected similar frustration many students say they are feeling.

Of the protest, College freshman Ashley Brown said she’s learned the importance of joining the movement instead of staying on the sidelines.

College freshman Zoe Ravina, another protester, felt the sense of unity at the protest.

“[The protest] was really beautiful and amazing,” she said.