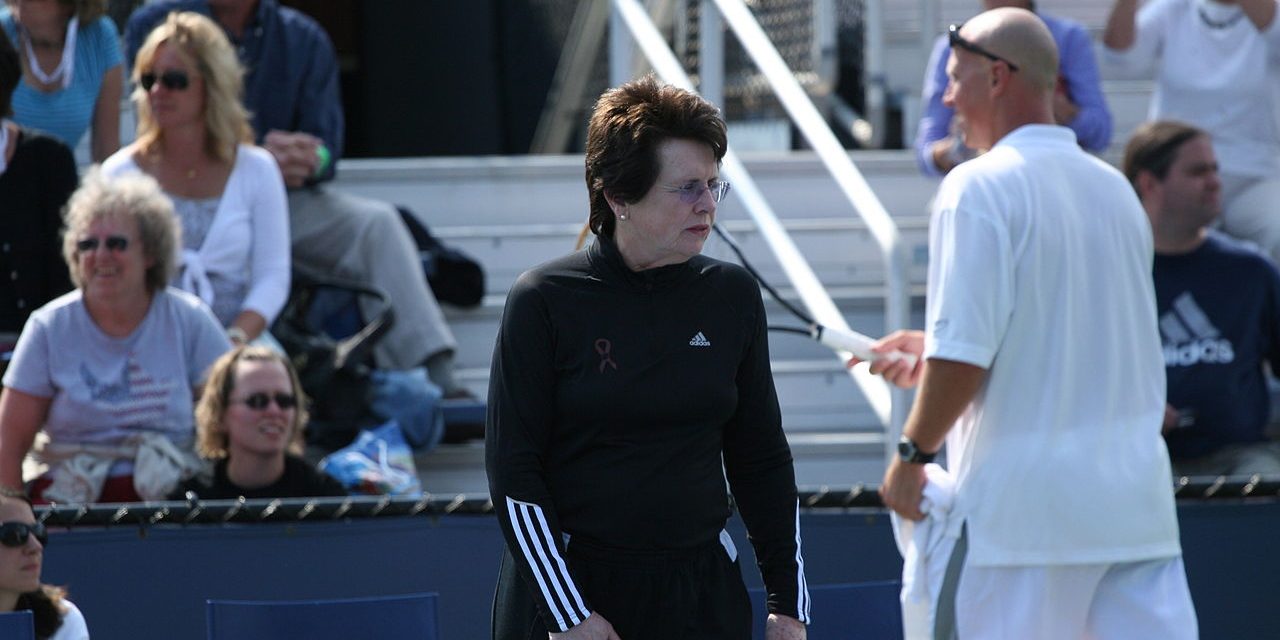 King accumulated 39 Grand Slam titles during her career and is widely regarded as one of the greatest tennis players of all time. She championed women’s rights during her time on the court and has dedicated her time off the court to making tennis more accessible to people around the globe. During the discussion, King recalled that being surrounded by white teammates, coaches and opponents bothered her when she began taking tennis lessons and inspired her to use her platform to create change.

“I thought to myself, ‘where’s everybody else?’” King said. “That was the day I promised myself, if I could be number one, maybe, just maybe I could make this world a better place.”

A  moment that perhaps best exemplifies King’s dedication to justice is the famous “Battle of the Sexes.” After retired professional tennis player Bobby Riggs boasted in 1973 that “the male is supreme” and challenged King to a match, King bested Riggs in three sets. King said that she felt the pressure to perform, explaining that the outcome of Title IX, a piece of legislation banning gender-based discriminiation, could be affected by the outcome of their match.

King also discussed how the match was representative of power dynamics, saying her victory highlighted how those lacking power become more resilient through their struggles.

While much of King’s legacy is tied to furthering gender equality, she resents that some still label her as only a leader of women. Although it has taken many years, King said people are beginning to acknowledge that her influence extends beyond women’s tennis and into the sports world as a whole.

“People come up and say, ‘Thank you for what you did for women’s tennis,’” King said. “They would never say that to a male … they say ‘Thanks for what you’ve done for tennis.’ It’s amazing how [tennis] is starting to shift.”

Much of King’s current work is with the Billie Jean King Leadership Initiative, which fights for greater inclusion in business and athletic spaces. In addition to working with companies to implement more inclusive practices, King raises money to provide underprivileged athletes – mainly women and people of color – with adequate recreational facilities and access to a variety of sports. King said that leveraging her influence to spearhead activism that supports oppressed groups is a necessity given her fame and power.

“We have to break down sports that aren’t as inclusive,” King said. “We all have to fight for inclusion, particularly when our sports don’t have it. We do have a unique opportunity because we have a platform.”

“Listen, Learn, and Lead” is the motto of the Initiative — an approach King encourages both amateur and professional athletes to follow. By actively seeking out those with different backgrounds, King hopes to start dialogue around the disparities that exist in all areas of life.

“You first have to listen, and actively listen,” King said. “Get comfortable having uncomfortable discussions. I always think it’s important for me to talk to people who don’t look like me, who don’t have the same religion, who come from a different place than I do and to really listen.”

Addressing the recent shootings in Georgia that left six East Asian women dead, King expressed grief for the victims and advised the audience that the most effective way to create change is to “maintain love.”

“Don’t let their hate ever suck you in,” King said. “I think it’s really important not to waste your energy on negativity. Keep thinking how you can improve things and not let them affect you in a negative way, even though they hurt. You have to keep bouncing back and keep sticking together.”

When asked what advice she would give to her college-aged self, King referred back to her athletic experience, confessing that stressing over faulty serves and erroneous strokes never served her well. Instead, she suggested that people treat obstacles as “feedback, not failure” and appreciate living in the moment.

“Everything’s going to be okay,” King said. “When I’ve been in what I call ‘the Zone’ – and that means in the now, in the present – there’s nothing like it. No matter what we’re doing, stay in the present.”

King stressed that acknowledging her self-worth allowed her to overcome adversity and achieve success, reminding the audience to never lose sight of what makes them “special.”

“A lot of people don’t think they deserve things,” King said. “And you do deserve it. You deserve the best that life has to offer. And don’t ever forget it.”

Thank you to @BillieJeanKing for speaking to Emory’s student athletes & students. I remember watching you win those grand slams. You’re an inspiration and role model for us all! pic.twitter.com/CJfoiG8z4r