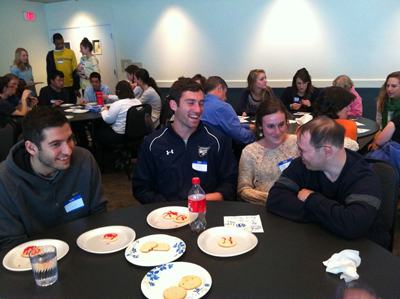 Emory University is one of many colleges that participates in Best Buddies, an organization that connects locals with intellectual and developmental disabilities (IDD) and Emory students by fostering a one-on-one friendship.

The program is unique, according to Goizueta Business School senior and Best Buddies President Ishan Dey, in that it provides enriching opportunities as well as long-lasting friendships for both parties involved.

Those with IDD have a challenging time finding jobs, Dey said, based on difficulties with social skills. Interaction with Emory students allows buddies to become more comfortable in social situations.

Emory students also find enjoyment in working with the buddies.

“I love meeting all of the buddies and really getting to know them,” College freshman Mack Schroeder said. “They are all so enthusiastic and happy to be there. As much as I feel like I am making a difference in [his buddy] Deorman’s life, I feel like he is making an even greater difference in mine.”

Emory Best Buddies held its third event of the semester Oct. 27, banner decoration, in the Winship Ballroom. By 2 p.m., more than 40 buddies and their paired members had filled the room and began participating in the event.

Music was playing as the partners gathered around tables in groups and colored rectangular patches to make a big quilt. The event was warm and talkative. Some members walked quickly from table to table to get more markers for their buddies.

Across the table, one of the buddies was drawing something in yellow.

“Well … it is Pluto,” said Armin Aidun, when asked what he was drawing on the patch.

Dey met his buddy Walter Mahone through Best Buddies during his freshman year.

They found out that they both love playing basketball and exercising. Often, they would hang out together outside Best Buddies events. Since then, Dey said, he has really connected to Mahone.

He gets the most enjoyment from the smiles on the buddies’ faces.

“It is so nice to see the buddies coming up to me, telling me how much fun they are having at the event,” he said. “[Emory students] have hung out with their buddies outside of events … The power of friendship is really special, and it is great to see some of these people who have been neglected by societies be included into normal college settings.”

Emory Best Buddies has come a long way. When Dey first joined the group in 2010, it only had around 15 buddies and 15 students.

Although it has had ups and downs in terms of numbers of the members in the past few years, it now manages to have more than 130 members.

“Coordinating everything is difficult, but I definitely enjoy it,” Dey said.

At Emory, despite the size of Best Buddies, not many students know about the organization, Dey said. Many of the members usually get to know about the group either through friends who are members or by recalling similar activities in high school.

College junior Hannah Moriarty joined the group this year when she realized her friend, Dey, was enjoying it so much.

“Sometimes it can be hard to pull your buddy out of his shell, especially if they are more introverted,” Moriarty said. “But Mandel [Moriarty’s buddy] and I have gotten along really great from the start. He usually starts off the meeting shy, but by 10 minutes in he is giving me high fives and hugs.”

Moriarty said joining Best Buddies was one of the best choices she’s made this year.

“I think that Best Buddies is a fun and interactive way to connect with the community outside of the Emory bubble,” she said. “I would encourage anyone with a little extra time in their schedules to get involved.”