Behind the Scenes: Students Participate at the Democratic Debate 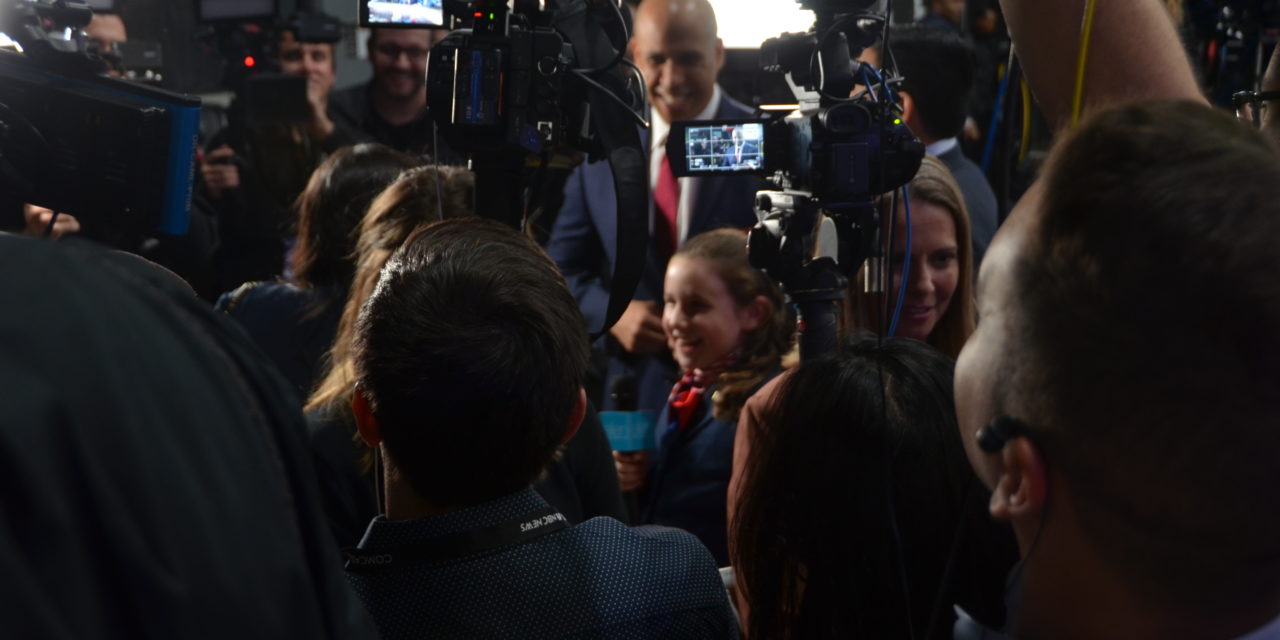 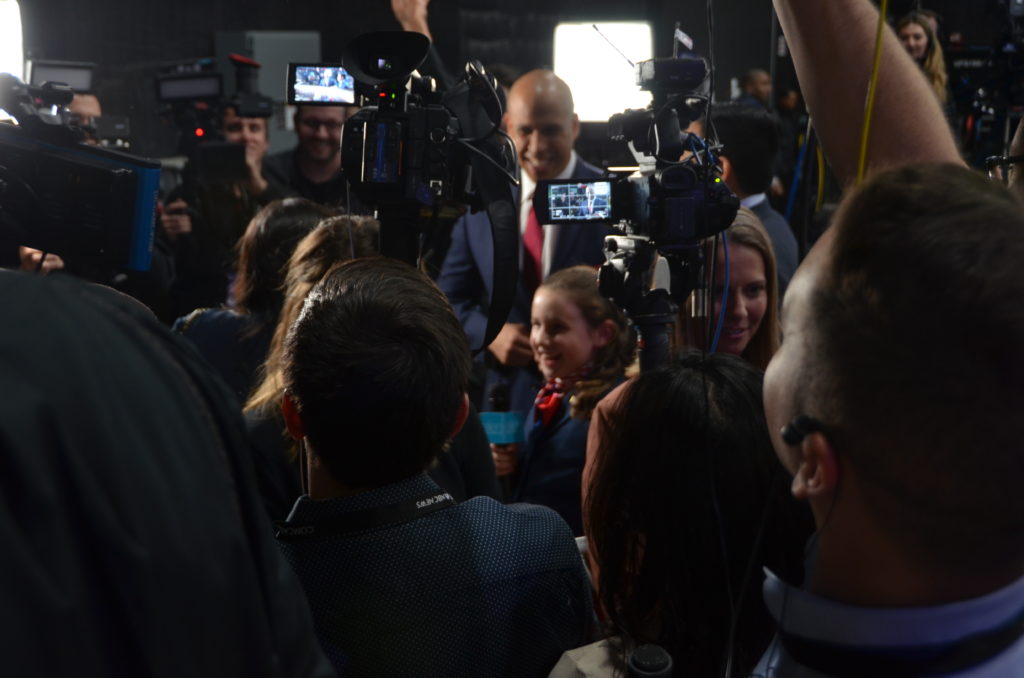 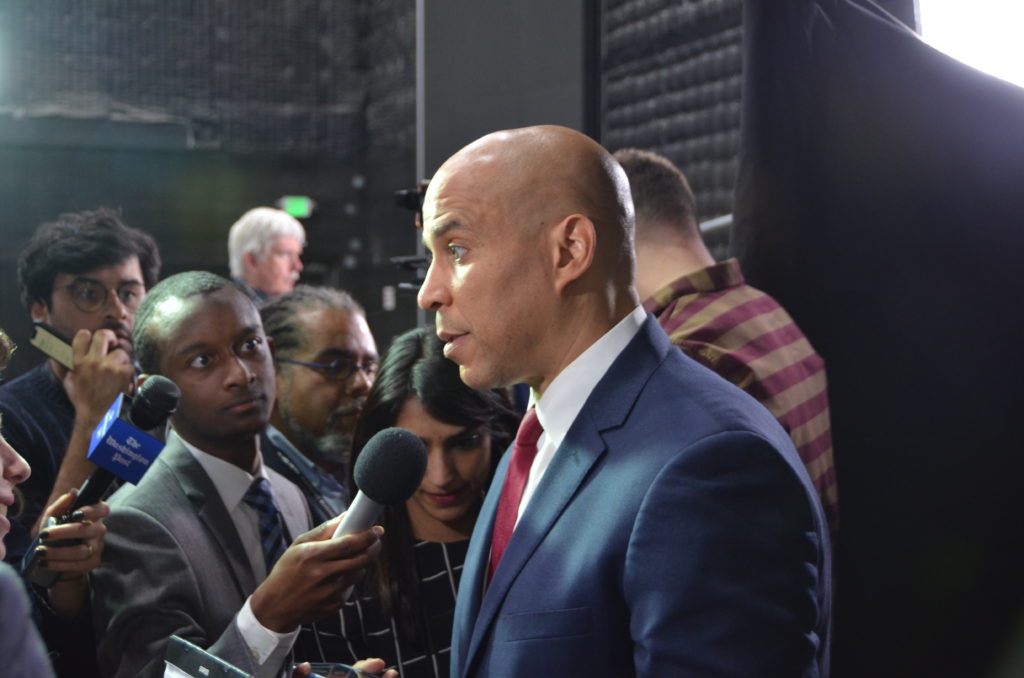 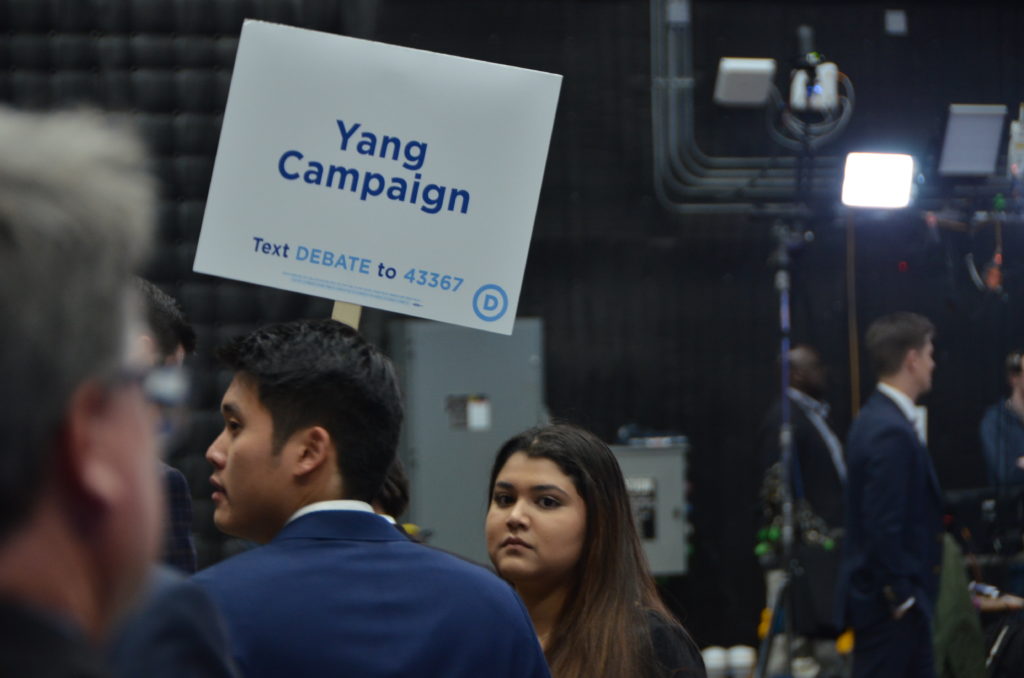 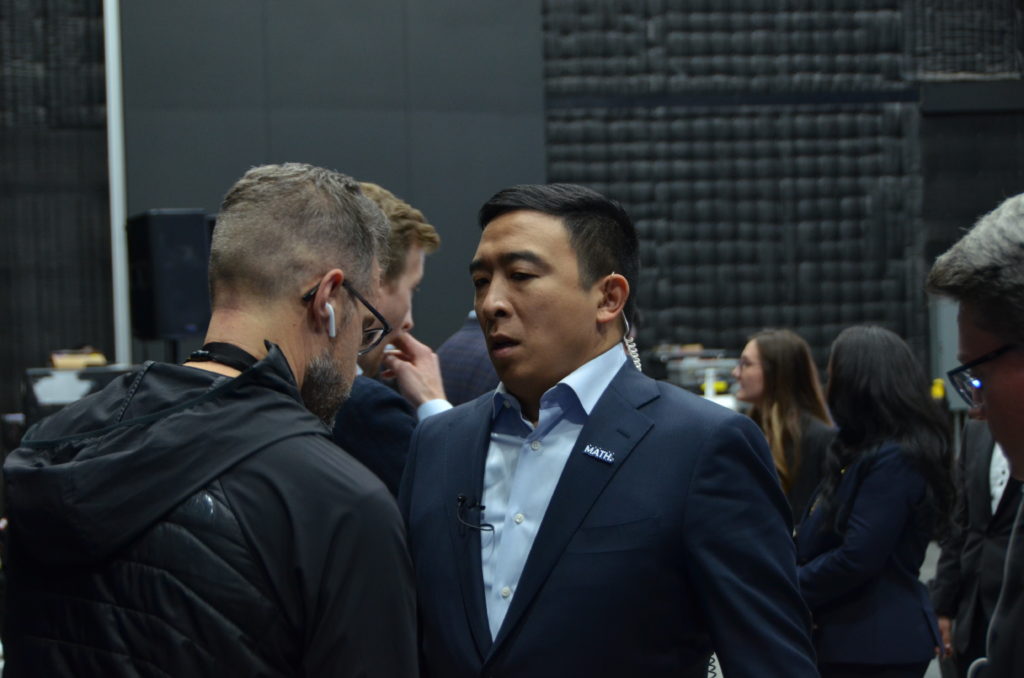 “This isn’t a firm red state or some Republican stronghold,” Hayden Davis (21C), president of Young Democrats of Emory, told the Wheel. “This is a state that is very, very ready to vote for a Democrat this year or next year, and we just need to make that happen.”

The Nov. 20 debate was held in southwest Atlanta at the newly minted, $250 million Tyler Perry Studios, the only major film studio owned by an African American in the United States.

Davis and more than 10 other members of Emory Young Dems volunteered at the debate, where they staffed the press room, worked as “lollipop” carriers, or sign holders, and ushered debate watchers to their seats. Clad in black suits, the students found themselves within feet of South Bend, Ind., Mayor Pete Buttigieg, Sen. Amy Klobuchar (D-Minn.), entrepreneur Andrew Yang and more.

Following the debate, the Wheel caught up with some of the volunteers in the press hall who expressed contentment for being involved in the major political event.

“As soon as we found out the debate was going to be in Georgia, we basically reached out [to the DNC] and asked how to help,” Davis said.

Davis was responsible for holding a sign that indicated Buttigieg’s location in the press room, where journalists circulated from one candidate to another. Liz Pittenger (22C), another Young Dems volunteer, acted as the “lollipop” carrier for Klobuchar, while Young Dems member and College Council Chief of Staff Alex Chanen (21B) held the sign for Tom Perez, chair of the DNC.

Jen Goodman (20C), president of Fair Fight U Emory, also volunteered at the debate, where she escorted debate spectators, Georgia state politicians and families of the candidates to their seats. Goodman was also given the opportunity to watch the debate in the debate hall.

“Being in the room with the candidates was super captivating because I could actually see how they were interacting with each other, not just what was on the screen,” Goodman said. “That experience was just something I don’t think I’ll ever experience again in my life. … It was just an awesome time; I’m still in shock that I got to go and be in that room.”

Following the debate, candidates and public officials joined reporters in the press room to field questions.

With dozens of reporters surrounding her, Atlanta Mayor Keisha Lance Bottoms, a supporter of former Vice President Joe Biden, discussed the significance of Georgia’s role in the 2020 election.

“I thought tonight was so important for the South in general, and I think it really speaks to the fact that people see that Georgia is in play,” Bottoms said. “It speaks volumes that we’re here, that we’re here on the grounds of Tyler Perry Studios, that we are in the city of Atlanta, and I think that black women across this state have shown that we can influence elections.”

During the debate, candidates also tackled the topic of voter suppression, with the first mention of former gubernatorial candidate Stacey Abrams made early by Klobuchar.

“I like what [Sen. Cory Booker (D-N.J.)] said about voter suppression,” Pittenger said. “I think that’s very relevant, especially with Stacey Abrams’ gubernatorial election in 2018. I think the candidates normally shy away from discussing [the topic during] the primaries because they are … majority-white states, so I think they can do a better job addressing that.”

Goodman felt that the moderators’ focus on recent national events took away from the historic relevance of the debate’s location. She also noted that minority candidates could have received more speaking time.

“I thought it was kind of problematic that they didn’t start the debate off with questions about voting rights and instead with Trump and impeachment … that takes away from issues happening in local places,” Goodman said. “The debate was in Atlanta for a reason so they should have focused on issues that were more relevant to black voters and the South.”

Chanen argued that the debate should have focused more on criminal justice reform, an issue that he believes is paramount in American politics.

“We can never talk about criminal justice reform enough. It is in my opinion the most important issue facing our country right now,” Chanen said. “I think we need to be pushing candidates more on it … at the end of the day, if we don’t have a legal system that works for everyone, what’s the point of all of this.”

Freshman Rep. Katie Porter (D-Calif.), who acted as a surrogate for Sen. Elizabeth Warren (D-Mass.) in the spin room, addressed the candidate’s comments that gun violence had not received enough attention from the moderators.

Porter, along with the other surrogates and presidential candidates, circulated the spin room until about 1 a.m.

Six candidates have already qualified for the sixth and final Democratic primary debate of the year. Though the field remains wide, Davis argued that the Democratic party is ultimately politically united.

“We are a big tent party,” Davis said. “We have a lot of folks with very different views but fundamentally, the areas where we agree are far, far greater than where we disagree. There’s a lot of common policy ideas.”

The December debate is scheduled to take place on Dec. 19 at the Luskin School of Public Affairs at the University of California, Los Angeles.

Editor-in-Chief | [email protected] | 801-828-6680 | Isaiah Poritz (21C) is from Salt Lake City, Utah, majoring in political science. Outside of the Wheel, Poritz is a money-in-politics reporting intern for OpenSecrets. He is a die-hard Utah Jazz fan and he loves coffee.