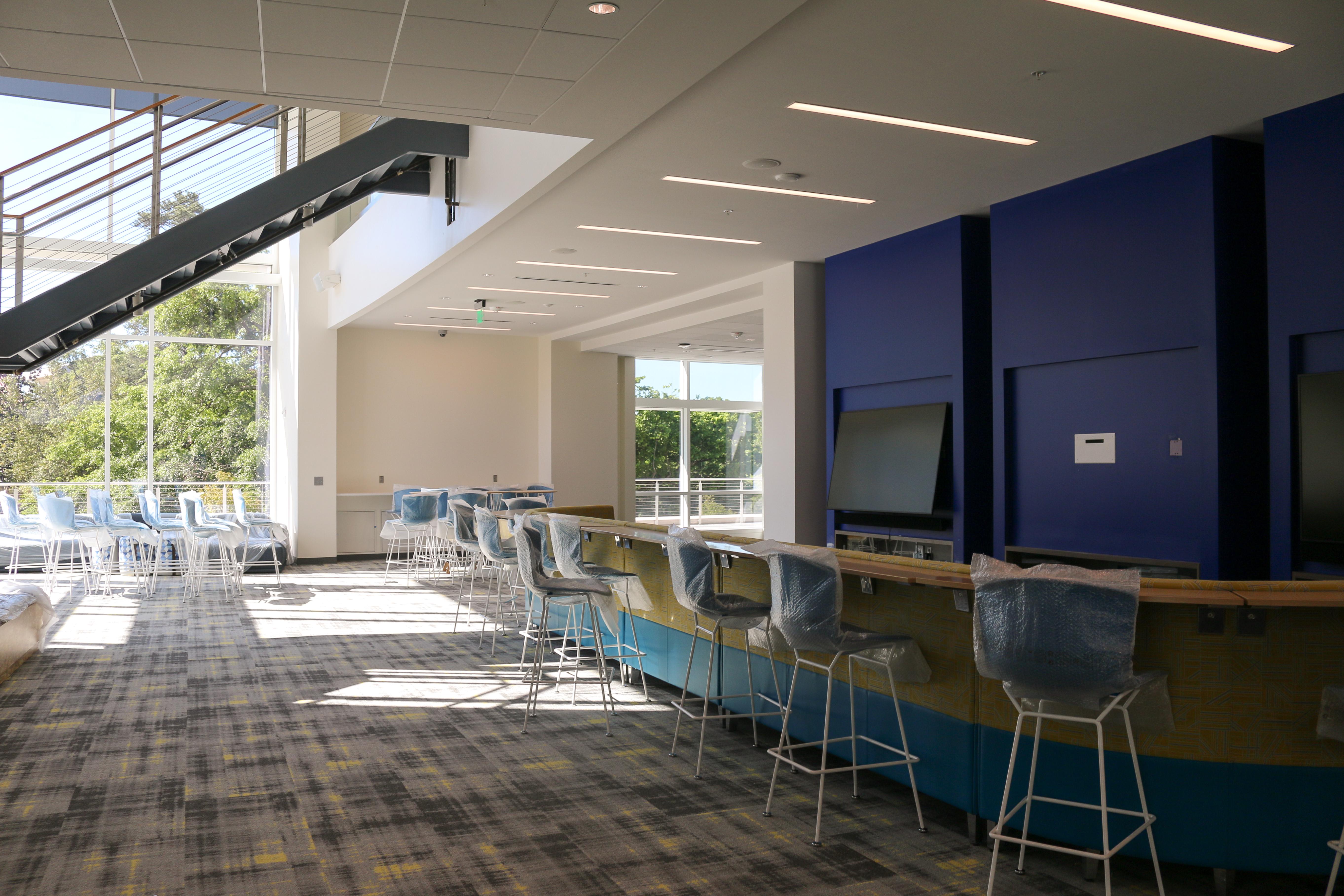 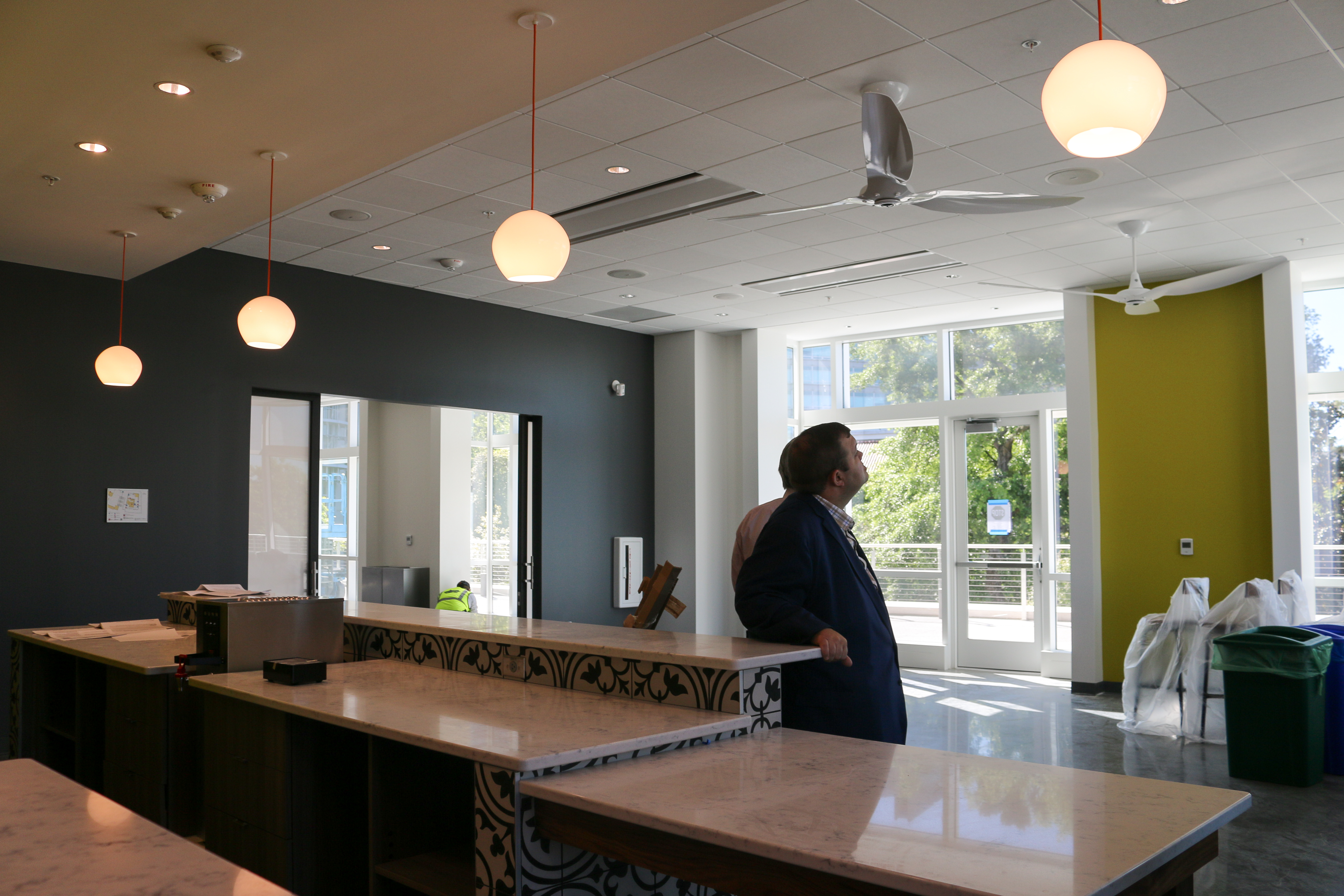 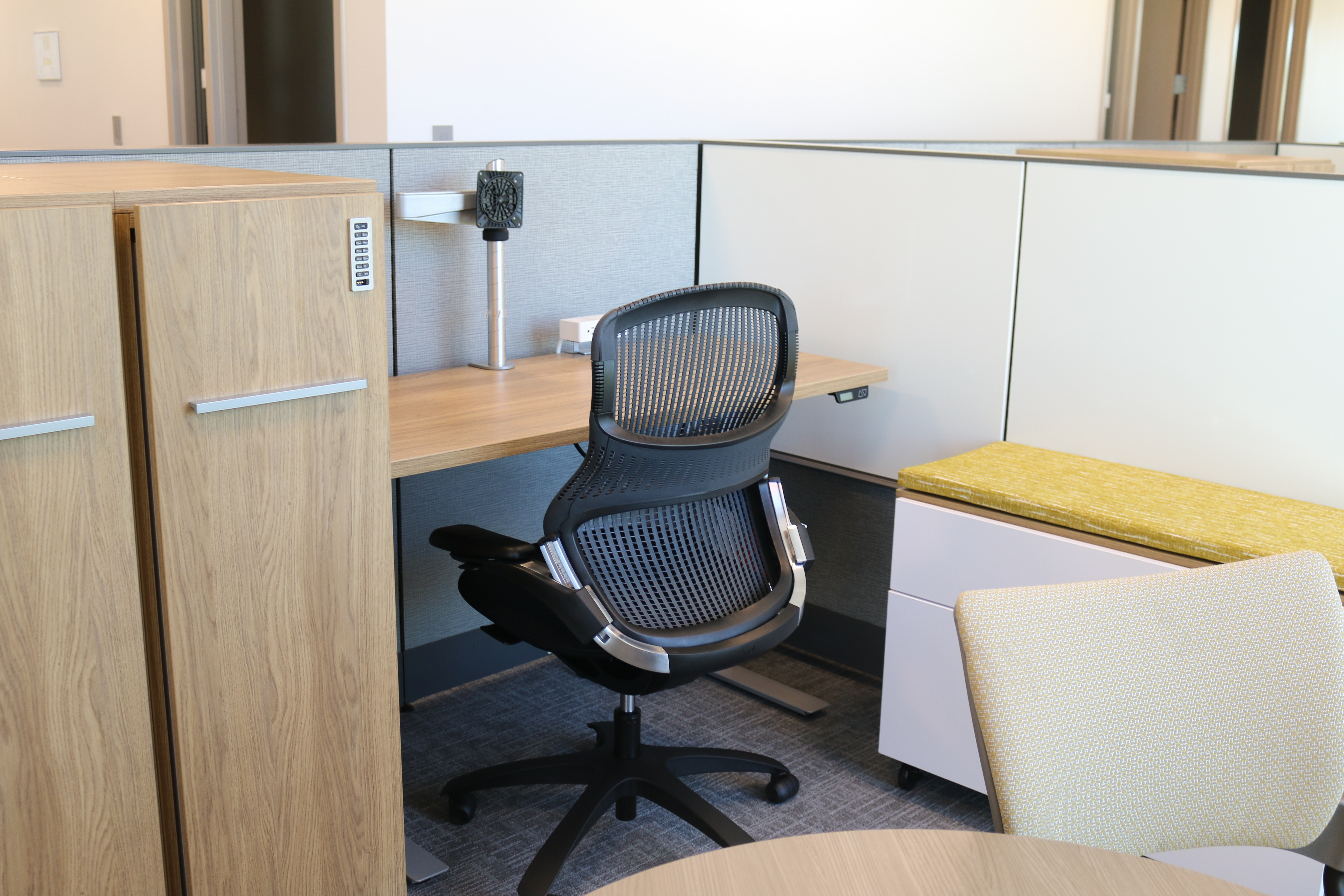 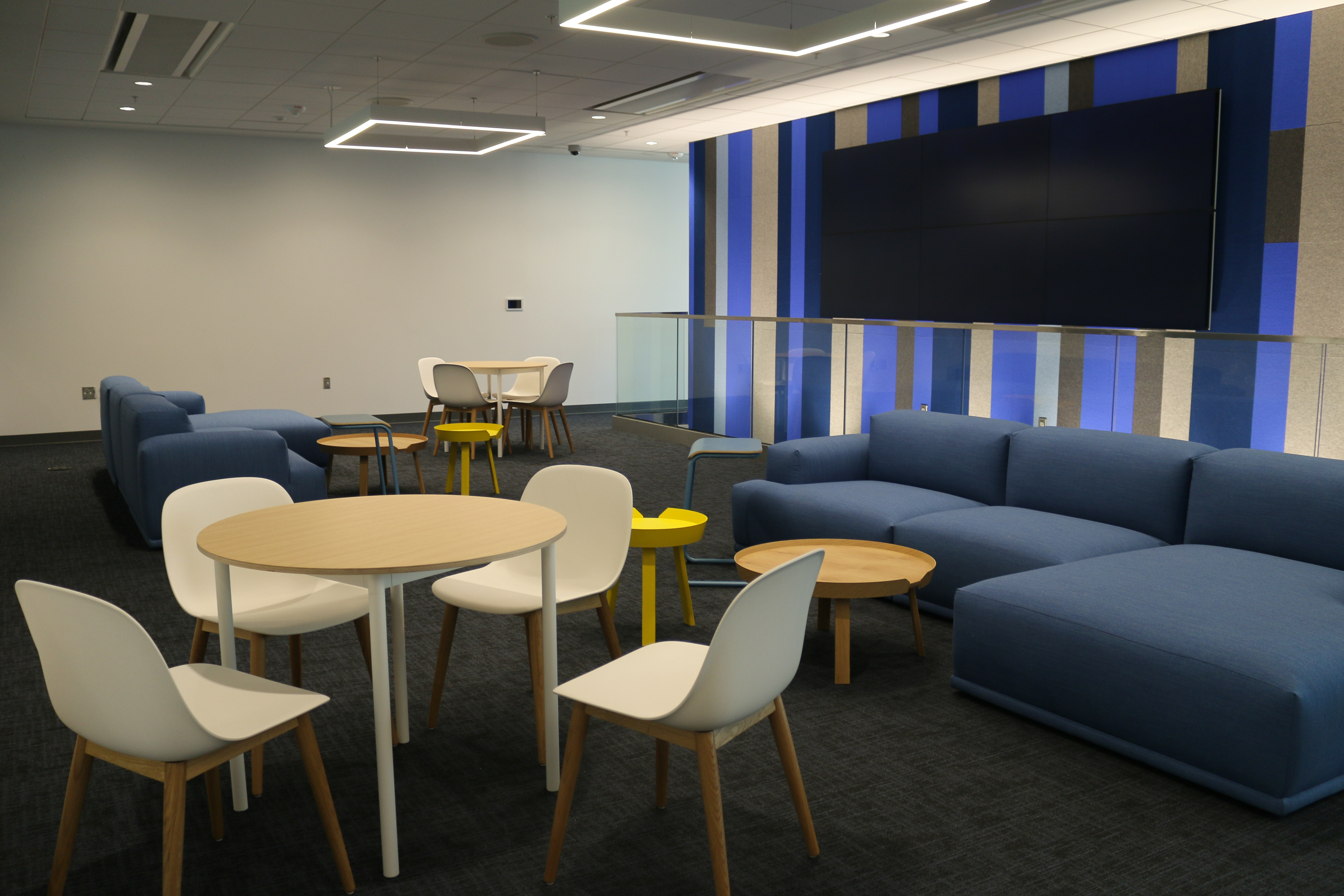 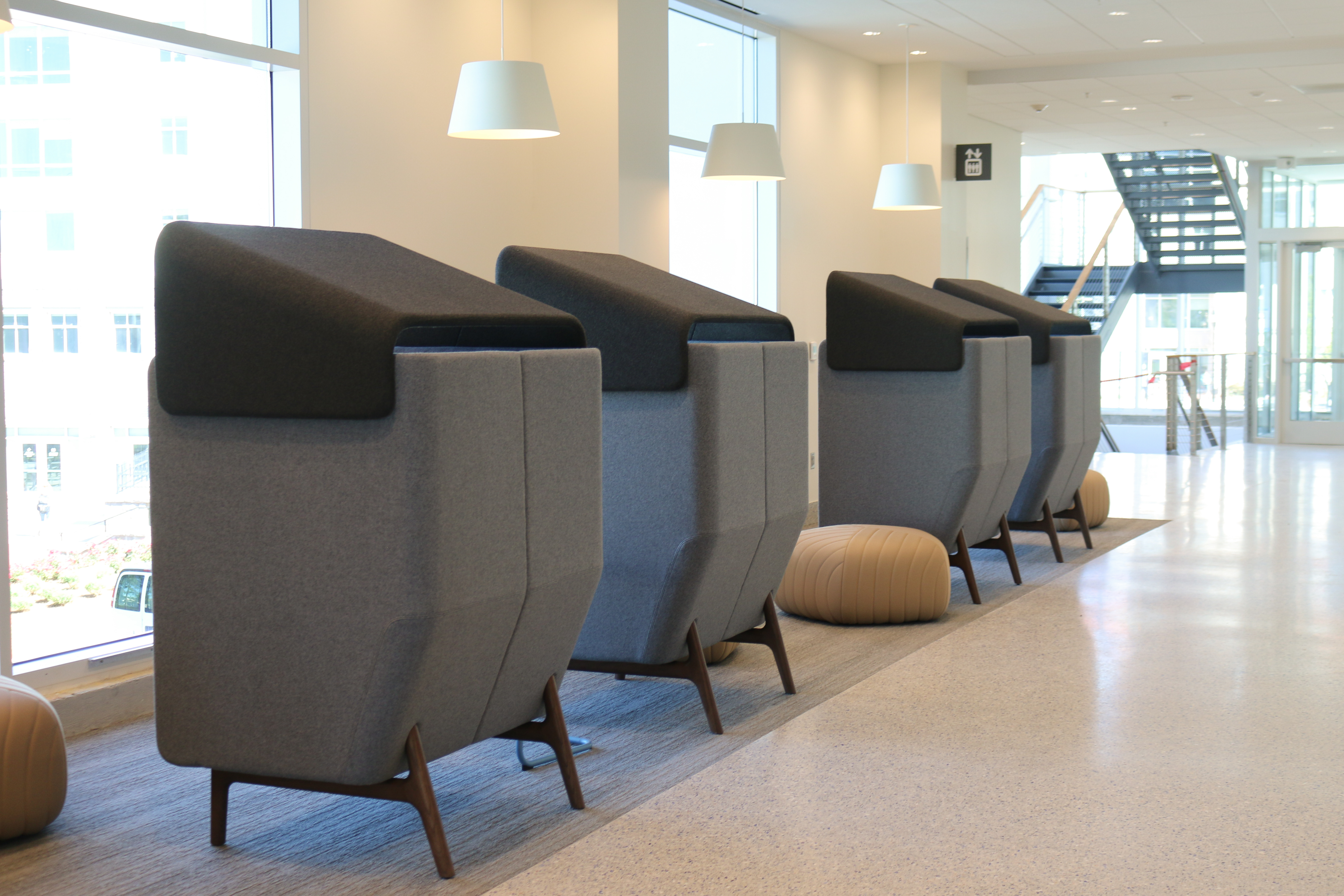 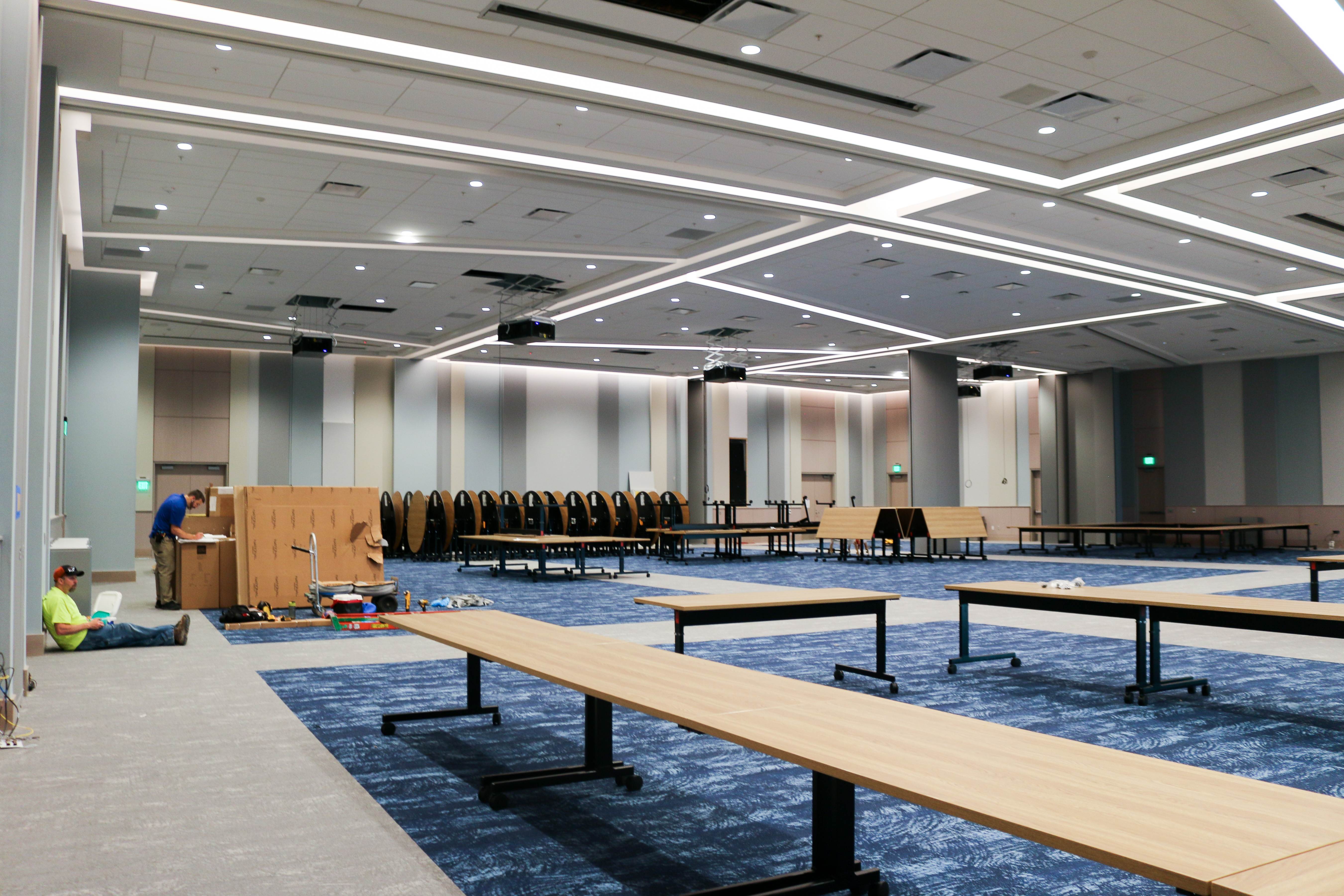 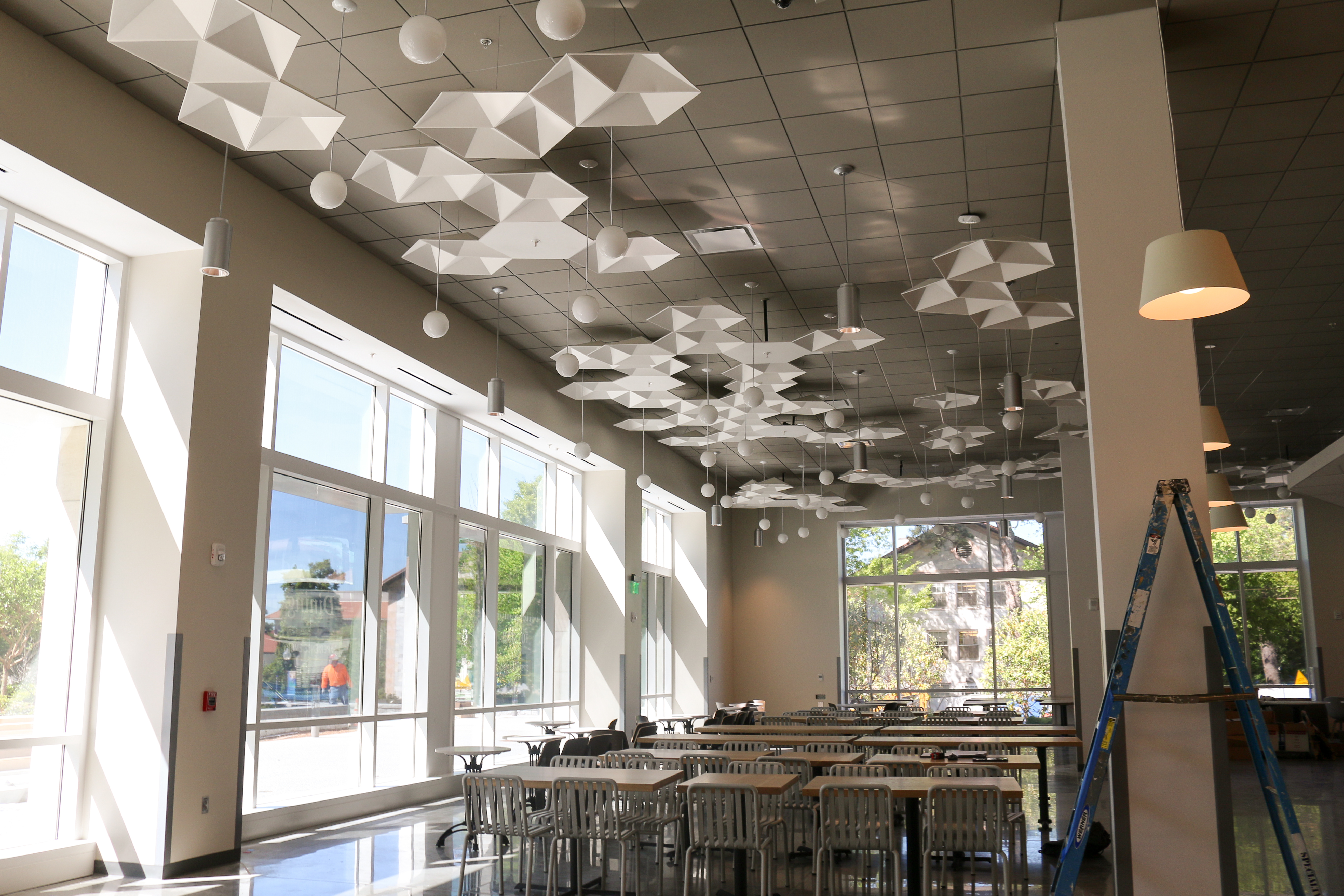 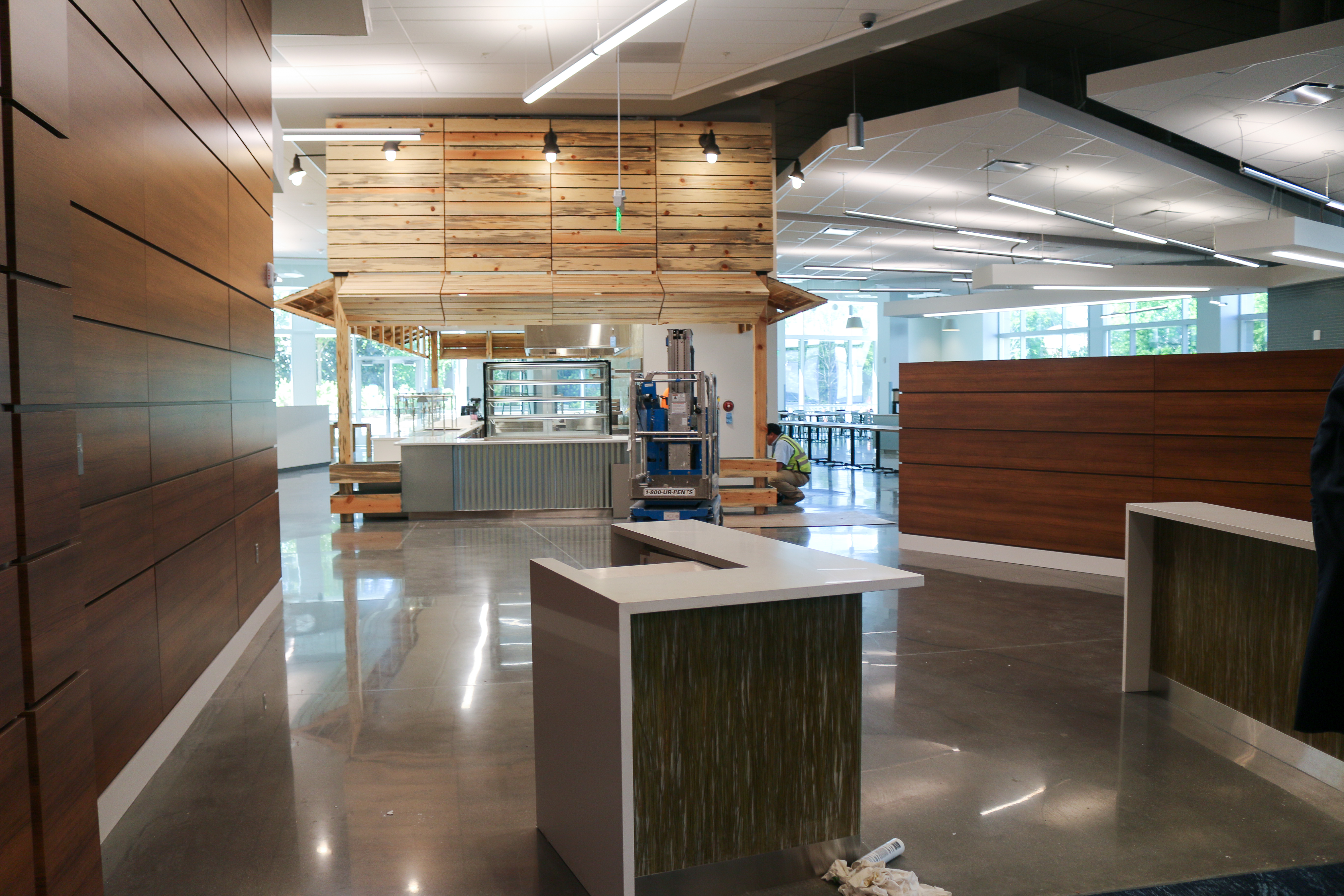 After almost two years of construction, the Emory Student Center (ESC) is set for a soft opening next month. The opening will mark a trial period during which ESC staff will prepare for full operation at the start of the Fall semester, according to Vice President of Campus Services Matthew Early.

On Monday, The Wheel toured the ESC with Early, Program Manager Al Herzog, Associate Vice President for Planning, Design and Construction Charlie Andrews, and Director of Campus Life Benjamin Perlman. With all major construction finished, all that is left are “punch-list” items, such as setting up furniture and fixing damages sustained during construction, according to Herzog.

The ESC is separated into two distinct pavilions, connected by a windowed walkway. The south pavilion houses office space, the dining commons and lounges. The north pavilion offers additional office space and lounges, storage space for clubs, and a multipurpose room large enough to seat a class together.

The multipurpose room can be divided using temporary walls into six smaller spaces connected by hallways. The room will provide an inexpensive alternative for student organizations looking to hold formal events that are often located in hotel ballrooms, such as the Office of LGBT Life’s Queer Fair and sorority formals.

“If a sorority is planning their semi-formal at the Georgian Terrace Hotel, [they can do it here] for tens of thousands of dollars cheaper,” Perlman said.

Overflow seating outside of the room can accommodate another 200 people using monitors that display the room’s interior. Such seating could be used for events like the annual Carter Town Hall, Perlman said.

The dining commons features a seating capacity of 760 people. The commons will feature  a hearth for pizza, a rotisserie, a kosher station, a grill, a salad bar, vegan and vegetarian stations, and Mongolian and stir fry stations. There will also be a beverage station with freshly squeezed orange juice and soft-serve ice cream. Windows in the dining area provide a limited glimpse into the kitchens. There are two private dining rooms that can be reserved.

The “Welcome to Emory” mural previously attached to the DUC-ling will be moved to a wall across from the dining commons. Additionally, local artist Christina Kwan was commissioned to paint a part of the ceiling in the commons.

The north pavilion features a two-story open lounge that Herzog dubbed “the commons,” not to be confused with the dining commons. Inside, the walls are panels of dark gray marble preserved from the Dobbs University Center (DUC). Above the commons are more lounges with collaboration spaces and storage space for student organizations. Noise-canceling privacy chairs enclosed on the sides are placed next to floor-to-ceiling windows offering a view of the Atlanta skyline.

On the second floor of the south pavilion, a lounge contains a billiards table and a foosball table as well as 75-inch monitors that can connect to gaming systems. Another billiards or foosball table will be added depending on student use, according to Perlman. Board games, video games and lawn games will be available for check out at the front desk.

A geothermal well was created underneath McDonough field exclusively to air condition the ESC. The site consists of 64 wells sunk 400 feet below the surface of the field and will be the first geothermal system on campus.

The ESC uses LED lighting, ceiling fans and fritted glass throughout the building, which reduces glare and heat, as part of Emory’s ongoing commitment to sustainability, according to Early.

ATMs will be moved from Cox Hall to the space outside of the dining commons.

The AMUC stands opposite the east entrance to the ESC. This entrance to the AMUC will likely not be operational as it opens into the backstage of the Mary Gray Munroe theater, according to Early. A marble plaza adjacent to a grass field sits between the two buildings, which will be open for student organizations to hold events in August, Perlman said.

The DUC-ling will serve its last meal on May 8 before being taken down, according to Early. The area it currently occupies will be repaved with brick to form Asbury Walk, with construction finishing before January 2020, the Wheel previously reported.